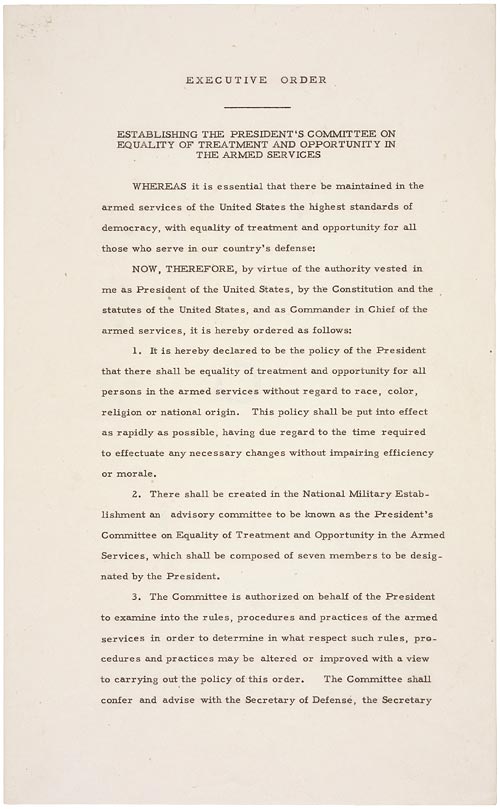 In 1940, African-Americans made up almost 10 percent of the total U.S. population (12.6 million people out of a total population of 131 million). During World War II, the Army had become the nation's largest minority employer. Of the 2.5 million African-American males who registered for the draft through December 31, 1945, more than one million were inducted into the armed forces. Along with thousands of Black women, these inductees served in all branches of service and in all Theaters of Operations during World War II.

During World War II, President Roosevelt had responded to complaints about discrimination at home against African Americans by issuing Executive Order 8802 in June 1941. It directed that Black Americans be accepted into job-training programs in defense plants, forbid discrimination by defense contractors, and established a Fair Employment Practices Commission (FEPC).

After the war, President Harry Truman, Roosevelt's successor, faced a multitude of problems and allowed Congress to terminate the FEPC. However, in December 1946, Truman appointed a distinguished panel to serve as the President's Commission on Civil Rights, which recommended "more adequate means and procedures for the protection of the civil rights of the people of the United States." When the commission issued its report, "To Secure These Rights," in October 1947, among its proposals were anti-lynching and anti-poll tax laws, a permanent FEPC, and strengthening the civil rights division of the Department of Justice.

In February 1948, President Truman called on Congress to enact all of these recommendations. When Southern Senators immediately threatened a filibuster, Truman moved ahead on civil rights by using his executive powers. Among other things, Truman bolstered the civil rights division, appointed the first African-American judge to the Federal bench, and named several other African-Americans to high-ranking administration positions. And on July 26, 1948, he issued this executive order abolishing segregation in the armed forces and ordering full integration of all branches.

Executive Order 9981 stated that "there shall be equality of treatment and opportunity for all persons in the armed forces without regard to race, color, religion, or national origin." It established the President's Committee on Equality of Treatment and Opportunity in the Armed Services to recommend revisions to military regulations in order to implement this policy.

The advisory committee examined the rules, practices, and procedures of the armed services and recommend ways to make desegregation a reality. The committee, chaired by Charles Fahy, was terminated upon submission of its final report, entitled "Freedom to Serve," on May 22, 1950.

There was considerable resistance to the executive order from the military, but by the end of the Korean conflict, almost all of the military was integrated.

Establishing the President's Committee on Equality of Treatment and Opportunity In the Armed Forces.

WHEREAS it is essential that there be maintained in the armed services of the United States the highest standards of democracy, with equality of treatment and opportunity for all those who serve in our country's defense:

1. It is hereby declared to be the policy of the President that there shall be equality of treatment and opportunity for all persons in the armed services without regard to race, color, religion or national origin. This policy shall be put into effect as rapidly as possible, having due regard to the time required to effectuate any necessary changes without impairing efficiency or morale.

2. There shall be created in the National Military Establishment an advisory committee to be known as the President's Committee on Equality of Treatment and Opportunity in the Armed Services, which shall be composed of seven members to be designated by the President.

4. All executive departments and agencies of the Federal Government are authorized and directed to cooperate with the Committee in its work, and to furnish the Committee such information or the services of such persons as the Committee may require in the performance of its duties.

5. When requested by the Committee to do so, persons in the armed services or in any of the executive departments and agencies of the Federal Government shall testify before the Committee and shall make available for use of the Committee such documents and other information as the Committee may require.

6. The Committee shall continue to exist until such time as the President shall terminate its existence by Executive order.