Reader note: The photographs in this exhibit are taken from the Historical Record of Camp Kilmer, NJ, January - September, 1945, which is part of the National Archives - New York's Record Group 336, Records of the Office of the Chief of Transportation holdings. The photos are undated, but related reports and other documents in this Historical Record suggest that most were taken in 1945. Captions were filed with the photos for the most part, and we included the full text of these captions whenever possible. 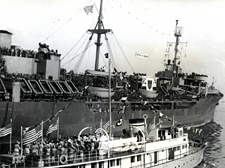 Greeted by a Women's Army Corps (WAC) band, veterans of the 86th "Blackhawk" division, cramming the troop transport General Brooke, sail up New York Harbor prior to entraining for Camp Kilmer. The 86th was the first divisional unit to return from Europe for redeployment to the Pacific.

Toward the end of 1941, with the threat of war imminent, the War Department chose a site between Edison and Piscataway, New Jersey as a staging area for troops. They named the camp for the poet Joyce Kilmer, who enlisted in the U.S. Army during World War I and was killed in action in the Aisne-Marne offensive. Construction began at Camp Kilmer in January 1942 and was completed in six months. The facility covered over 1,500 acres and consisted of 1,120 buildings, including rows of wooden barracks, seven chapels, five theaters, nine post exchanges, a gym, three libraries, four telephone centers, a post office, a 1,000-bed hospital, 28 miles of roadway, and about 11 railheads that fed into the main line.

From its opening in 1942 through the end of the War, Camp Kilmer was a major transportation hub for U.S. soldiers traveling to and from the European Theater. More than 20 divisions with over 1,300,000 servicemen staged at Camp Kilmer before being deployed to Europe. The site also hosted various Allied units before they were sent elsewhere for training.

Camp Kilmer operated more like a small city than a typical army facility, and servicemen enjoyed all types of entertainments and activities. The Camp had its own baseball and football teams and hosted exhibition games with professional clubs from New York. There were 20 softball diamonds, 30 volleyball courts, and 160 horseshoe courts available for recreation. The Camp had their own band and orchestra, and there were also dances and movies. 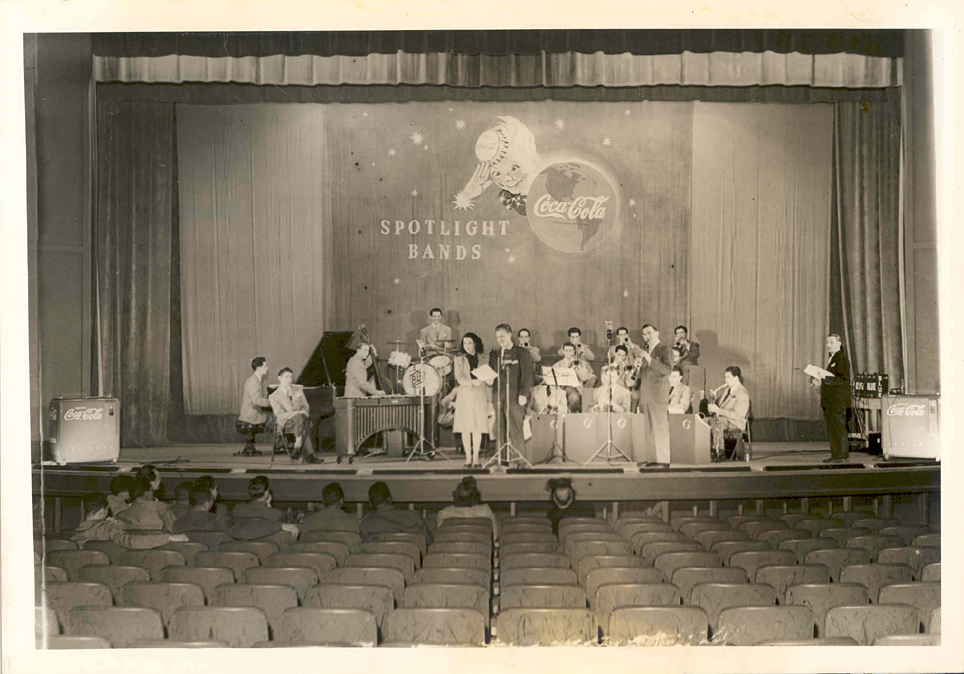 The first radio broadcast to emanate from Camp Kilmer was heard over 193 stations of the Blue Network on March 15 (1945?) when the "Victory Parade of Spotlight Bands," featuring Benny Goodman and his orchestra, came to camp. Here the "King of Swing" and the rest of the show hold rehearsal on the stage of Theater 4, which had been equipped for radio broadcasting.

USO-Camp Shows put on productions of plays at Camp Kilmer, and the troops had visits from professional athletes and top Hollywood stars. Benny Goodman performed at the first radio program to be broadcast from the Camp on March 15 (1945?). As many as 21,000 returning troops a day would be entertained by the USO's eight-hour continuous shows. 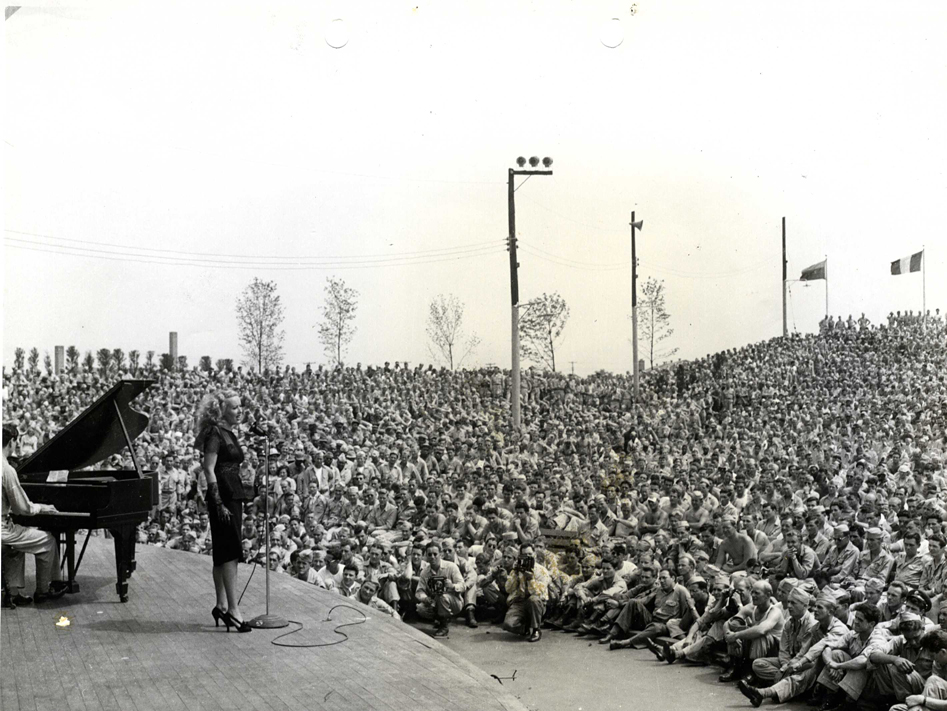 In the spring and summer, outdoor entertainment, including eight-hour continuous shows, were offered for the benefit of newly-arrived veterans who had served overseas. Here, movie star Betty Grable starts off one of the all-afternoon and evening programs for a crowd of 11,500 debarkees within a few hours after their arrival in camp.

New York Yankee star Joe DiMaggio and comedian Red Skelton, both serving with the Army, were temporarily assigned to the Camp. DiMaggio autographed baseballs for wounded soldiers and gave hitting and fielding lessons, while Skelton made unannounced visits to the hospital for his version of "laugh therapy."

A typical group of veterans flown back to the states under the "Green Project" for furloughs or discharges from airbases in Europe and Africa, wave a greeting at Camp Kilmer. Speedy processing would get them to reception centers only 48 hours after taking off from foreign soil.

With the ending of hostilities in 1945, the Camp became the main receiving center for soldiers returning from Europe and the Pacific. By September 1945 over 300,000 of these returnees had been processed, and at times over 5,000 a day were coming through the Camp. In December 1945, Sgt. Melford Fabricant became the one millionth soldier to pass through Camp Kilmer.

Camp Kilmer was deactivated in the fall of 1949. It was briefly reactivated for the Korean War, but by the mid 1950s Fort Dix, in central New Jersey, had overtaken it as the major processing point in the area. Camp Kilmer's last major role came near the end of 1956 when it served as the receiving center for those fleeing the Hungarian Revolution during "Operation Mercy." 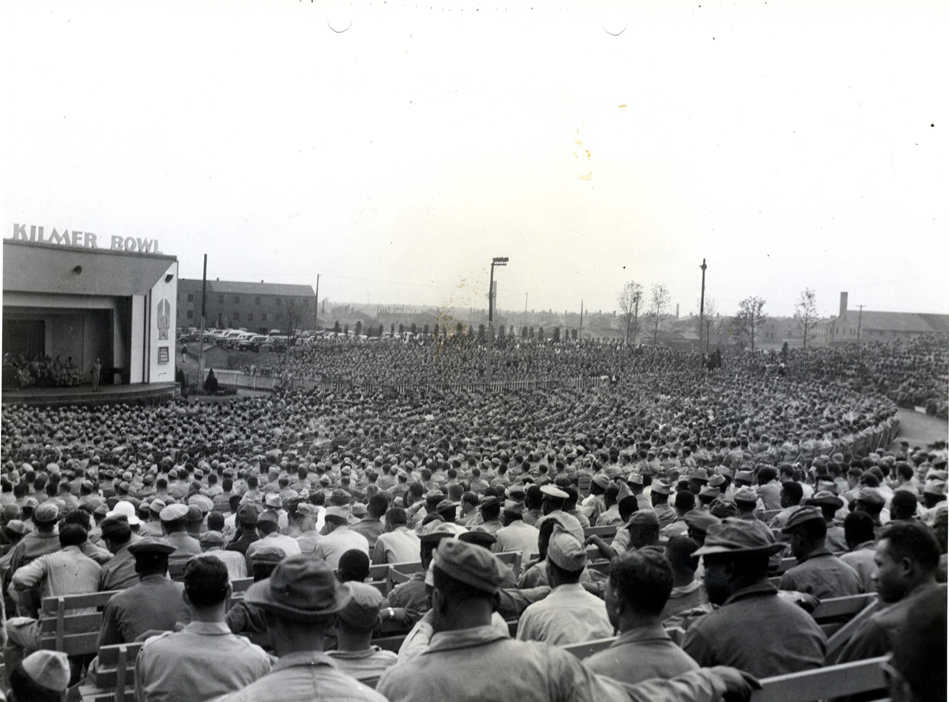 By the 1960s much of the Camp's properties and land were dispersed. Today, there is a Vocational Training Center located at the site as well as housing and schools.

The photos in this exhibit are part of the National Archives' Record Group 336, Records of the Office of the Chief of Transportation holdings. The Office was established in the Services of Supply (SOS), War Department, in 1942 to head the Transportation Division, and it was abolished in 1964. Within the U.S., the Office administered a variety of field installations and functions including ports of embarkation, port agencies, transportation depots, offices, and zones.

The National Archives - New York has over 99 cubic feet of RG 336 holdings, dating from 1944 to 1953, documenting the movement of troops and materials. The records include correspondence, orders, reports, and unit histories.

Below are more photos showing various facilities, events, and activities at Camp Kilmer. 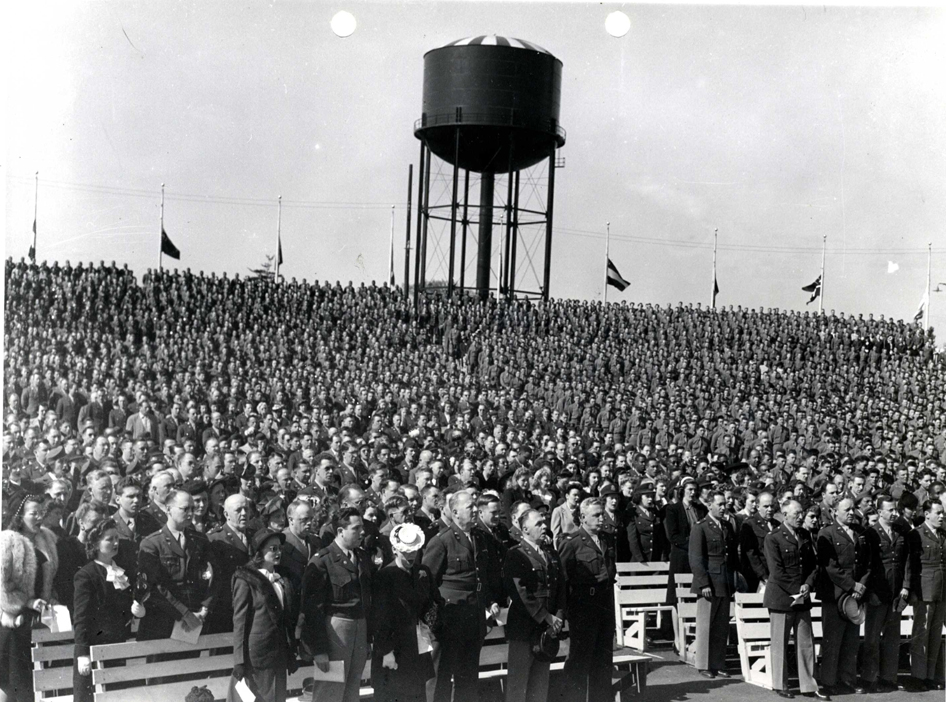 Like the rest of the stricken nation, Camp Kilmer mourned the untimely passing of President Franklin Delano Roosevelt. Gathering for a special memorial service in his honor, the post's military and civilian personnel filled the Kilmer Bowl to capacity on Sunday, April 15, 1945 at 10:00 a.m. The official War Department proclamation announcing the death of the Commander-in-Chief was read by Col. Cecil L. Rutledge, post commander. The post chaplains of all faiths, Hansen Bergen, Joseph L. Ginsberg, Odus C. Newlon, and Edmund J. Ronan, took part in the ceremony. Appropriate music was provided by the Kilmer Choral Group, Col. Don Wilson at the organ, and Pvt. Ruth Fenner and Elizabeth Pasek of the Chaplain's Branch, who sang a duet.

The first baby born at Camp Kilmer, arriving March 2, 1945 at the newly-opened maternity ward in the Station Hospital, turned out to be strictly GI. The mother of the eight pound, 11½ ounce boy was a former WAC, Mrs. Dorothy Inman Spillane, of South Amboy, N.J. The father was S/Sgt. Edward Francis Spillane of Philadelphia, who was somewhere in France with the U.S. Army Air Forces at the time of his son's birth. The baby was named Edward, Jr.

The "Cheer Cart" brought the Station Hospital PX to bedridden patients. The attendant wheeled the mobile unit around the wards twice daily. Orders were taken for any items not available on the cart itself. 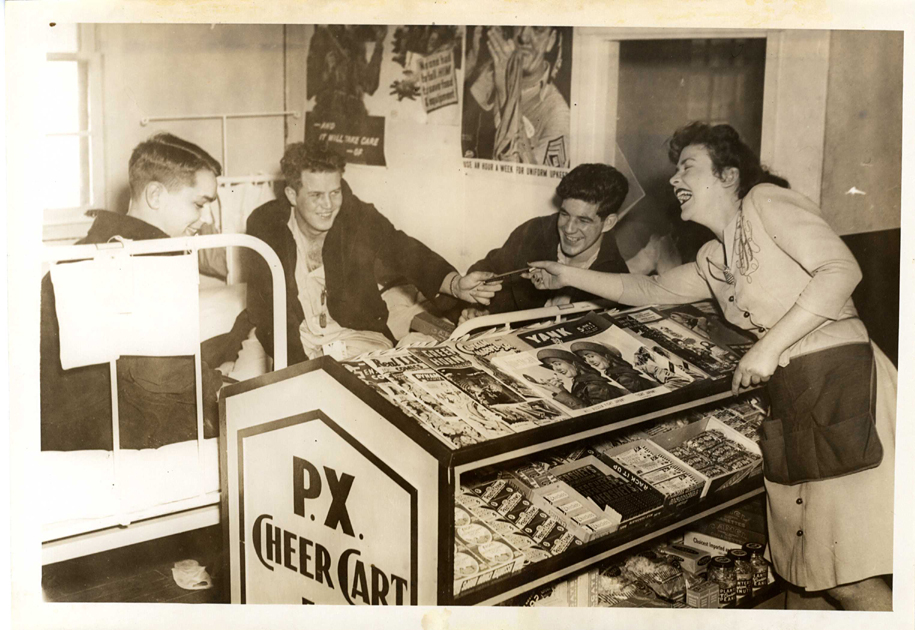 One of the principal speakers at the Kilmer College dedication on September 12 (year unknown), Dr. Robert C. Clothier, president of Rutgers University, told the assembled officers, enlisted men, nurses, and WACs that peace "will lift the lid of a Pandora's box, releasing a host of problems that need solution" and called for "knowledge, intelligence, and more than that, character and integrity of purpose."

Evacuee patients arriving at the Station Hospital never lacked for entertainment. For the litter cases, members of one of the post bands formed small units to go from ward to ward. 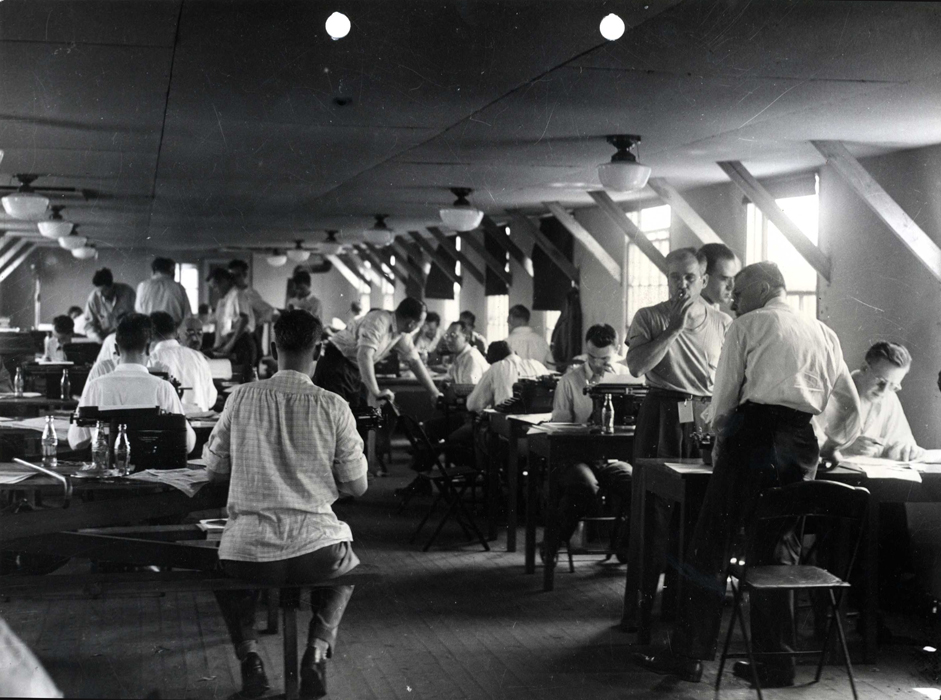 Reporters in the press headquarters in building 1542.

Some of the 300 reporters who covered the arrival of the 86th "Blackhawk" Division, the first combat unit of its size to be redeployed from the European Theater of Operations to the Pacific, prepared their stories for filing in the press headquarters set up in building 1542 on the post. Representing 47 states, the journalists and photographers began arriving Friday, June 15 (1945?), and were billeted in Area 15. In the three days they remained on post they kept 24 telegraph operators working 20 hours daily to file 486,431 words. Special telephone facilities were also installed for them and radio broadcasters, who roamed the areas making transcribed interviews which they airmailed back to their home studios. 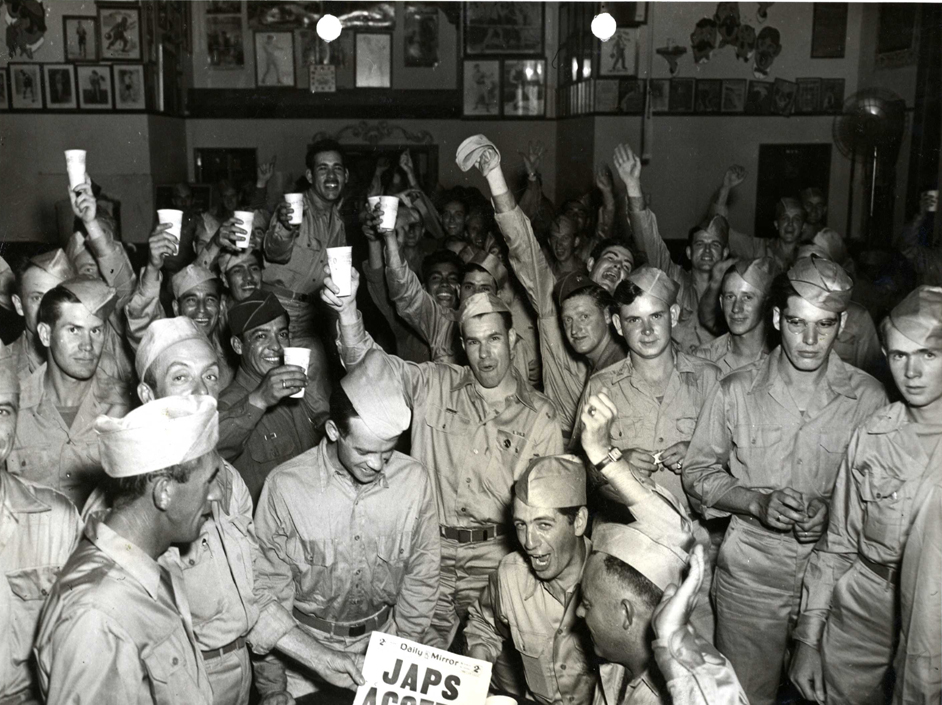 When the news of Japanese surrender reached this post by radio and newspaper stories, spontaneous celebrations, like this one of returned overseas troops at the Gay 90s Beer Hall, were the order of the day. 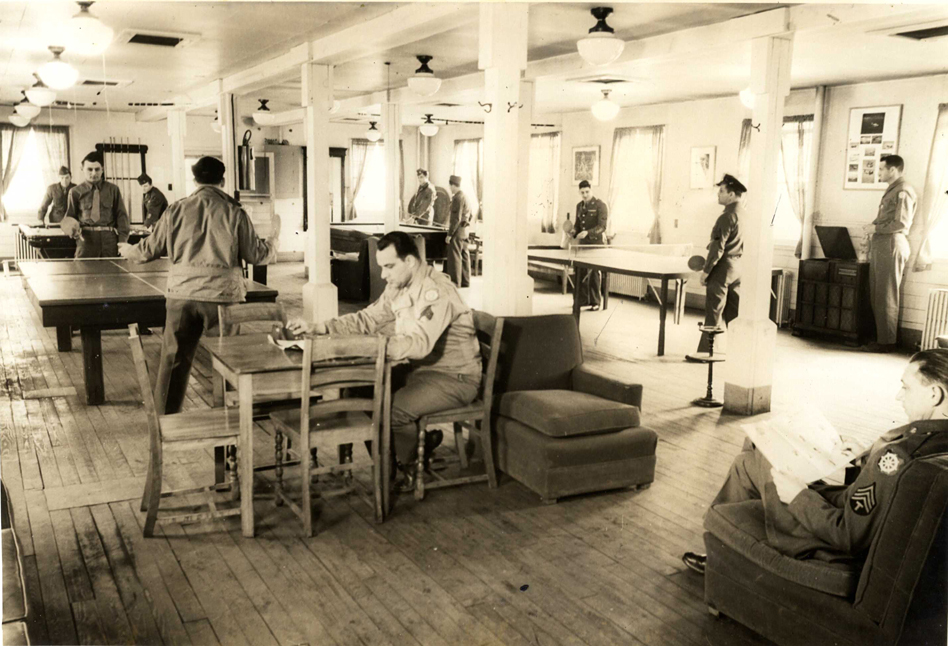 To provide additional recreational facilities for men of the TC Detachment, the unit's day room moved to larger quarters in building 1443. Besides this main game room, three other smaller rooms are set aside for reading and writing.

More information on Camp Kilmer and related research topics can be found here: