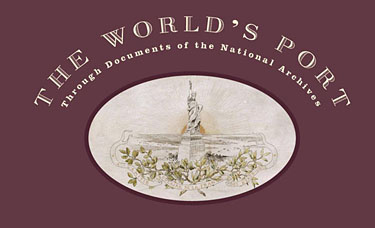 From a single wharf built on the East River in 1648, the Port of New York grew rapidly to become "The World's Port." Ideally located, the Port of New York became the gateway between the United States and the rest of the world as it flourished with the influx of trade and people. The Federal government played a major role in managing this growth by overseeing port activities such as collecting duties on goods and processing newly arrived immigrants as well as enforcing maritime law and responding to disasters at sea.

"The World's Port" explores aspects of the Port of New York using documents and photographs from the National Archives. Trade and Money reflects the growth of business and commerce in the Port of New York. The Immigrant Experience demonstrates the port's role as the gateway to America for the millions of immigrants. Actions of pirates and smugglers in and around the port are seen in the section Criminal Intent. In Dangers and Disasters two of the most infamous maritime disasters of the 20th century are brought to life through documents filed in Federal courts.

Among the documents featured in the World's Port are the deed of gift for the Statue of Liberty, deck plans of the RMS Titanic, a passenger arrival record listing the first person processed at Ellis Island, architectural designs for the Custom House, slave receipts seized by the Navy during the Civil War, and an indictment for the last person executed in the US for being a pirate.

The exhibition is part of the opening celebrations for the National Archives at New York City which will be moving to the Alexander Hamilton U.S. Custom House this fall. For more information on the move visit our press release.

"The World's Port" exhibition is located in the 2nd floor Rotunda of the Alexander Hamilton U.S. Custom House at One Bowling Green, New York, NY. The exhibit is open every day from 10:00 am to 5:00 pm and on Thursdays from 10:00 am to 8:00 pm. For additional information about the World's Port visit our online preview..

The National Archives at New York City is an integral part of the tri-state area's internationally renowned network of research and cultural institutions. Holdings consist of Federal records from New Jersey, New York, Puerto Rico, and the U.S. Virgin Islands.

The Alexander Hamilton U.S. Custom House, completed by architect Cass Gilbert in 1907, is a magnificent Beaux-Arts style building located at the junction of the Wall Street Financial District and the Battery Park tourism district. Its exterior and interior are decorated with carvings, murals and sculpture, including works by Daniel Chester French, Louis Tiffany, and Louis St. Gaudens. The site itself is historically significant, from its origins as the location of Fort Amsterdam--the nucleus of what would become New York City. The National Archives at New York City will occupy space on the 3rd and 4th floor of the Custom House. The rotunda, auditorium and lecture halls are shared spaces.