Getting the Most from Ancestry

Nation to Nation: Treaties Between the United States and American Indian Nations 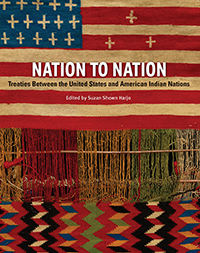 This is a live broadcast of the discussion taking place in Washington DC. To view online visit: https://www.youtube.com/watch?v=C42gSB_FQL0. To view at the National Archives at New York City, register at: newyork.archives@nara.gov or call toll free: 866-840-1752.

Please note: All programs are free and open to the public. Select copies of the treaties in this exhibit will be on display in the Learning Center during the program. Copies of the book will be available for purchase after the program in the 2nd floor gift shop of the National Museum of the American Indian.

This program is in partnership with the Smithsonian Institution, National Museum of the American Indian.

Kevin Gover, Director of the National Museum of the American Indian, and Suzan Shown Harjo, guest curator of the "Nation to Nation" exhibit, explore the promises, diplomacy, and betrayals involved in treaties and treaty making between the United States government and Native Nations. One side sought to own the riches of North America and the other struggled to hold on to traditional homelands and ways of life. The book reveals how the ideas of honor, fair dealings, good faith, rule of law, and peaceful relations between nations have been tested and challenged in historical and modern times.

About the George Gustav Heye Center

A diverse and multifaceted cultural and educational enterprise, the National Museum of the American Indian (NMAI) is an active and visible component of the Smithsonian Institution, the world's largest museum complex. The NMAI cares for one of the world's most expansive collections of Native artifacts, including objects, photographs, archives, and media covering the entire Western Hemisphere, from the Arctic Circle to Tierra del Fuego. The National Museum of the American Indian facility in New York, The George Gustav Heye Center (GGHC), houses exhibitions, research, educational activities, and performing arts programs.

For more information about the National Archives at New York City, visit: www.archives.gov/nyc