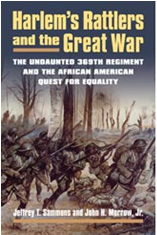 New York City, NY: Conceived in Politics, Born in Ridicule, and Reared in Opposition': The Fantastic and Fascinating Story of Harlem's 15th/369th Regiment AKA 'The Rattlers'

Though discussed in numerous histories and featured in popular culture (most famously the film Stormy Weather and the novel Jazz), the 369th has become more a matter of mythology than accurate history. This book—which eschews the regiment's famous nickname, the "Harlem Hellfighters," a name never embraced by the unit itself—tells the full story of the self-proclaimed Harlem Rattlers. Combining the "fighting focus" of military history with the insights of social commentary, Harlem's Rattlers and the Great War reveals the centrality of military service and war to the quest for equality as it details the origins, evolution, combat exploits, and postwar struggles of the 369th.

Harlem's Rattlers and the Great War will be available for $38.00 at this event. A book signing will also occur directly after the event.

Jeffrey T. Sammons is professor in the Department of History at New York University.

This program is free and open to the public.

Please note: Due to the inclement weather of the winter, this talk was postponed from February.

For more information about the National Archives at New York City, visit: www.archives.gov/nyc.