Sketch of Articles of Confederation

Sketch of Articles of Confederation

Franklin submitted his Sketch of Articles of Confederation to the Continental Congress on July 21, 1775, a year prior to the colonies declaring their independence. The document consisting of 13 articles is strikingly similar to the document accepted by the Congress in 1777. Both refer to a perpetual union, "of friendship with each other, for their common defence, the security of their liberties, and their mutual and general welfare..." Franklin's document was a first step in coordinating the military and political goals of the colonies for the purpose of union. 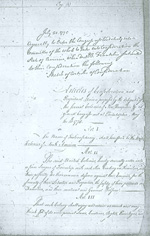 EnlargePDF Link
Sketch of Articles of Confederation, July 21, 1775 See transcription of this document.

The Articles passed by the Continental Congress was a more detailed document than Franklin's; leaving more room to go into the details of the government's abilities and responsibilities. In particular, Article IX goes on at great length enumerating the powers that Congress is both entitled to and prohibited from. At the same time, Franklin enumerates Congressional powers in general terms, referring to the determination of war and peace, the appointment of military officers, and the desire to produce a common currency.

Franklin was also quite visionary. He incorporated the ability to adapt and change in Article XII, allowing for the adoption of amendments that may be necessary in response to changing times. Article XI mandated that an alliance be made with the Six Nations Indian tribes. Moreover, he extended the confederation beyond Canada, to Ireland and colonies in the West Indies.

While Franklin's Articles were considered and briefly debated by the Continental Congress, the document itself was never ratified by the Congress. Instead, it served as a framework for plans to come. John Dickinson would consider several of Franklin's provisions in his Articles of Confederation submitted to the Continental Congress in 1776. The committee who submitted the final version of the Articles retained Franklin's 13 article design. Lastly, the Constitution ratified in 1787 allowed for the addition of amendments just as Franklin had a decade earlier.