Noticeably missing from Franklin's Articles are provisions meant to protect freedom of speech and of the press. A printer by trade, Franklin was keenly aware of the necessity of a democracy to have a venue for ideas, opinions, and dissent. Although he had been known to reject writings of a scandalous nature on occasion, Franklin believed that only a free press could provide protection against tyranny. 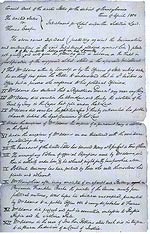 At the Constitutional Convention of 1787, Franklin rallied behind the adoption of the Constitution, despite the absence of provisions to protect speech and a free press. A Virginian, George Mason, led the opposition to its adoption citing the absence of a "Declaration of Rights" meant to protect freedoms such as assembly, speech, and unwarranted searches, to name but a few. Mason's influence would win the day on December 15, 1791 as the Bill of Rights was ratified, thus guaranteeing the essential freedoms of our democracy.

By 1798 the notion of a free press received a direct challenge with the passage of the Sedition Act (ch. 74, 2 Stat. 596). The act, which made it illegal to publish criticisms of the President or Congress, would be wielded as a political tool by John Adams to root out opposition to his administration. Thomas Cooper of Sunbury, Pennsylvania would become one such victim. Cooper, a newspaper editor, ran a broadside critical of the Adams administration and was subsequently indicted and found quilty under the Sedition Act. Despite First Amendment protections, Franklin's fears of arbitrary power and press restrictions had come to fruition.