The Question of Slavery

The Question of Slavery

As a young man, Ben Franklin owned slaves. As he got older, his views changed. In the 1770s, Franklin worked with abolitionists. In 1790, he sent an essay to congress about his views. Benjamin Franklin even served as president of the Pennsylvania Society for Promoting the Abolition of Slavery and the Relief of Free Negroes Unlawfully Held in Bondage. Although he does not specifically mention slavery in his Articles, Franklin seems to placate slave owners in Article III when he writes, "That each colony shall enjoy and retain as much as it may think of its own present Laws, Customs, Rights, Privileges, and peculiar Jurisdictions within its own limits..." 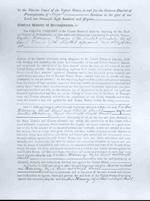 In 1793, the U.S. passed its first fugitive slave law. The law was a response to a conflict between Virginia and Pennsylvania over the kidnapping of John Davis. Governor Mifflin of Pennsylvania claimed Davis was free. The 1793 law got rid of the conflict and made it legal for fugitive slaves to be captured in the north and returned to their masters. It also made it illegal for northerners to help a runaway slave. This 1793 law was strengthened by the Fugitive Slave Act of 1850. This law required the return of slaves who fled their masters.

Noah Buley, Nelson Ford, George Hammond and Joshua Hammond escaped from their owner, Edward Gorsuch, in the autumn of 1849. Two years later, Mr. Gorsuch led a posse from Baltimore County, Maryland to Philadelphia and on to Christiana in Lancaster County to find the slaves. At Christiana, local men led the posse to the Parker home where Buley and the others lived. The ensuing standoff escalated to shots being fired and in the end Gorsuch suffered fatal wounds.

The incident resulted not with indictments for violations of the Fugitive Slave Act of 1850, but with the indictment of over 30 individuals from Christiana for treason. In the resulting trial held at the Federal court in Philadelphia, the jury returned a verdict of not guilty for the charge of treason.