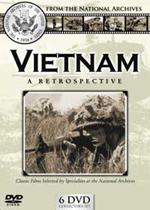 Vietnam: A Retrospective, a boxed set of six DVDs. From the National Archives in partnership with TOPICS Entertainment.

Washington, DC…The National Archives announces the release of “Vietnam: A Retrospective,” a boxed set of six DVDs containing more than 12 hours of film footage from its vast motion picture holdings. This compelling collection takes viewers on an unforgettable journey to the front lines of a conflict that spanned five presidencies and defined a generation. Find out how U.S. involvement in the war began in Hidden War in Vietnam and Why Vietnam? Experience heroic rescue missions in To Save a Soldier, Report on Marine Activities, and The Faces of Rescue. Get up close and personal with those that fought, with actual footage of daily activities, combat operations, and personal stories in A Nation Builds Under Fire, Another Day of War, and River Patrol. Finally, in Night of the Dragon, Operation Montagnard, and Vietnam, Vietnam, learn about Vietnam’s history, culture, and economy and the people who call it home.

Produced in partnership with Topics Entertainment, a leading educational software publisher and distributor, “Vietnam” is the latest release in an ongoing series of themed, multi-boxed sets of DVDs, CDs, and other software that features unedited materials selected by staff specialists at the National Archives.

Also available in the series –

About the National Archives
The National Archives and Records Administration, an independent federal agency, is the nation's record keeper. Founded in 1934, its mission is unique —to serve American democracy by safeguarding and preserving the records of our Government, ensuring that the people can discover, use, and learn from this documentary heritage. We ensure continuing access to the essential documentation of the rights of American citizens and the actions of their government. We support democracy, promote civic education, and facilitate historical understanding of our national experience. The National Archives meets a wide range of information needs, among them helping people to trace their families' history, making it possible for veterans to prove their entitlement to medical and other benefits, and preserving original White House records. The National Archives carries out its mission through a nationwide network of archives, records centers, and Presidential Libraries, and on the Internet at www.archives.gov.

About TOPICS Entertainment
Founded in 1990, TOPICS Entertainment is the largest, privately-owned multimedia publishing company in the United States. TOPICS offers more than 300 consumer language‑learning, education, and entertainment multimedia products, and is the exclusive software publisher/distributor for National Geographic, Rand McNally, World Book, Kaplan, Scholastic, and several others. An active supporter of the environment and education, TOPICS donates five percent of pre‑tax profits to a variety of conservation and environmental education organizations. Visit its web site at www.topics‑ent.com.