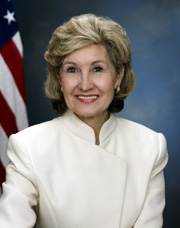 Washington, DC…On Wednesday, October 24, at
7 p.m., Archivist of the United States Allen Weinstein will host an “American Conversation” with Senator Kay Bailey Hutchison. The Senator will discuss her new book, Leading Ladies: American Trailblazers, which describes the lives of extraordinary women who excelled in fields previously closed to women or considered beyond their capability. Senator Hutchison will sign books following the program. This event is free, open to the public, and will take place in the fully-accessible William G. McGowan Theater of the National Archives Building in Washington, DC, located on the National Mall at Constitution Avenue and 7th Street, NW.

In Leading Ladies, Senator Hutchison examines the lives of accomplished women in such fields as military service, science, and medicine, which had been considered beyond their physical or mental capacity; spheres such as voting rights and social reform, that had been closed to women or ignored entirely; and national politics, where a number of women have succeeded in turning personal tragedies into springboards for public service.

Senator Kay Bailey Hutchison was first elected to the United States Senate in a special election in Texas in 1993, making her the first -- and, to date, the only -- woman elected to represent the state in the Senate. She serves in the Senate leadership, having been elected by her colleagues to be chairman of the in the 110th Congress, making her the fourth-highest ranking Republican senator. Senator Hutchison grew up in La Marque, Texas and graduated from the University of Texas and UT Law School. In June 2000, she and several colleagues coauthored Nine and Counting: The Women of the Senate, and in 2004, her second book was published, American Heroines: The Spirited Women Who Shaped Our Country.

The “American Conversations” series is part of the National Archives’ public programs and focuses on American history and identity. Senators Harry Reid and Hillary Rodham Clinton, Lynne Cheney, award-winning filmmaker Ken Burns, and historian John Hope Franklin have been among those featured in previous programs, which may be viewed on the National Archives web site.

Seating for this program is on a first-come, first-served basis. For more information or to request an accommodation (e.g., sign language interpreter) for a public program, please e-mail public.program@nara.gov or call (202) 357-5000 at least two weeks prior to the event to ensure proper arrangements are secured.