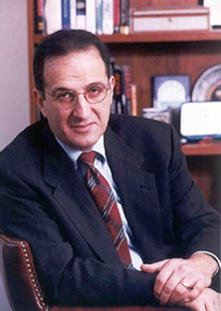 Washington, DC…Archivist of the United States Allen Weinstein will host an “American Conversation” with James Zogby for a discussion focusing on Arab American heritage on Thursday, November 8, at 7 p.m. at the National Archives.

The “American Conversations” series is one of the National Archives’ public programs and focuses on American history and identity. Senators Harry Reid and Hillary Rodham Clinton, Lynne Cheney, award-winning filmmaker Ken Burns, and historian John Hope Franklin are among those featured in previous programs, some of which may be viewed on the National Archives web site.

Events in this series are held in the William G. McGowan Theater of the National Archives Building in Washington, DC, located on the National Mall at Constitution Avenue and 7th Street, NW and fully accessible. All programs in the “American Conversations” series are free and open to the public. Seating for this program is on a first-come, first-served basis. For more information or to request an accommodation (e.g., sign language interpreter) for a public program, please e-mail public.program@nara.gov or call (202) 357-5000.