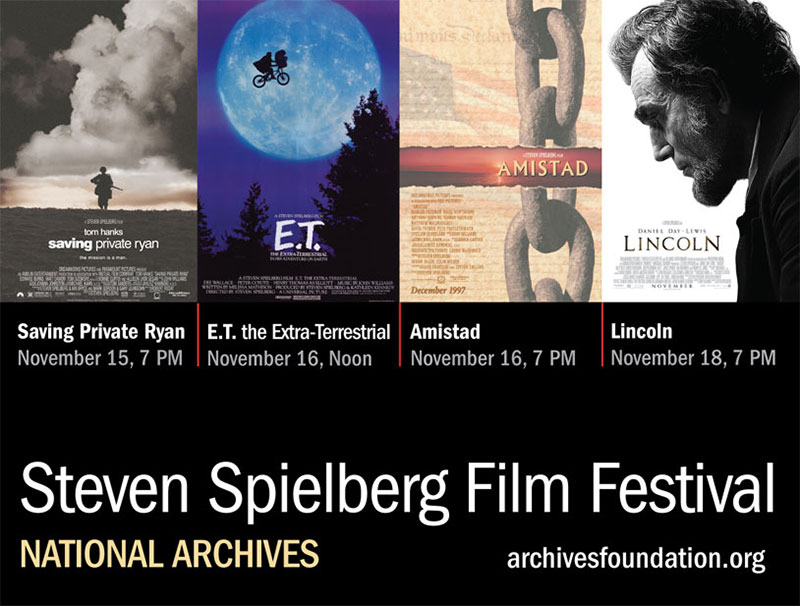 The Steven Spielberg Film Festival, presented at the Archives’ William G. McGowan Theater in association with DreamWorks Studios, will include screenings of:

Free tickets will be distributed at the Special Events entrance to the National Archives at 7th Street and Constitution Avenue, NW, beginning 60 minutes prior to showtime. Seating is limited and first-come, first-served.

Mr. Spielberg is being honored by the Foundation, the National Archives’ private partner, in recognition of his film legacy, which has brought history to life on the big screen. The Records of Achievement Award is a tribute to an individual whose work has fostered a broader national awareness of the history and identity of the United States through the use of original records, including those preserved by the National Archives. Previous recipients of Foundation awards include: Tom Brokaw, Ken Burns, the late John Hope Franklin, Annette Gordon-Reed, Brian Lamb and C-SPAN, Jacqueline Badger Mars, David McCullough, James McPherson, and David M. Rubenstein.

Mr. Spielberg, a three-time Academy Award® winner, will be recognized for his contributions as director of such historical films as Lincoln, Saving Private Ryan, Amistad, and Schindler’s List. He also will be honored for his work in creating what has become the USC Shoah Foundation Institute for Visual History and Education, which is dedicated to making audiovisual interviews with survivors and witnesses of the Holocaust and other genocides into a compelling voice for education and action.

The Foundation for the National Archives is proud to sponsor this public program through the support of the William G. McGowan Charitable Fund, Inc., and the generous sponsors of its 2013 Gala and Records of Achievement Award ceremony: AT&T, the Maris S. Cuneo Foundation, Governor Jim Blanchard and Janet Blanchard, and Marvin F. Weissberg.

About Steven Spielberg
Considered one of our country’s most influential filmmakers, Steven Spielberg is a principal partner of DreamWorks Studios and a three-time Academy Award® winner. Spielberg took home his first two Oscars® in 1993, for Best Director and Best Picture, for Schindler’s List, followed by a third award in 1999 for his direction of the World War II epic Saving Private Ryan. He has also garnered Academy Award® nominations for Best Director for Munich, E.T. the Extra-Terrestrial, Raiders of the Lost Ark, Close Encounters of the Third Kind, and most recently for Lincoln, which traces the President’s fight during the height of the Civil War to pass the Thirteenth Amendment to the Constitution, abolishing slavery.

Moved by the experience of directing the Holocaust drama Schindler’s List, Spielberg donated his profits to establish the Righteous Persons Foundation, an organization dedicated to strengthening Jewish identity and community in the United States. He also founded Survivors of the Shoah Visual History Foundation—now the USC Shoah Foundation Institute for Visual History and Education—which preserves video testimonies from survivors and other witnesses of the Holocaust.

About the National Archives
The National Archives and Records Administration is an independent federal agency that preserves and shares with the public records that trace the story of our nation, government, and the American people. From the Declaration of Independence to accounts of ordinary Americans, the holdings of the National Archives directly touch the lives of millions of people. The National Archives carries out its mission through a nationwide network of archives, records centers, and presidential libraries, as well as at www.archives.gov.