The Postmaster General and "The Magazine for Men" 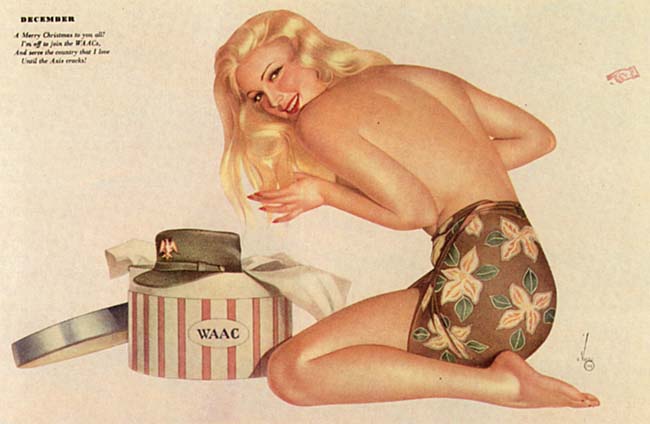 Postal officials also objected to all the pictures and some of the verses in the 1943 Varga girl calendar, which appeared in the January issue. Each month's Esquire also featured one of the gauzily draped Varga girls, named for their creator, Peruvian artist Alberto Vargas.(15) These illustrations, too, were geared to GI readers, and many reflected wartime themes. Censors objected to the December calendar page showing a Varga girl donning a WAAC uniform, but they okayed Phil Stack's verse: "A Merry Christmas to you all!/I'm off to join the WAACs,/ And serve the country that I love/ Until the Axis cracks!"(16)

According to Arnold Gingrich, the magazine sought the favor of the War Production Board and, it hoped, a larger allotment of paper by showing that a greater proportion of its copy was "calculated to enhance the morale of the troops."(17) Drawings of girls, which had been incidental to the magazine's cartoons, were enlarged as pin-ups. Products based on these popular favorites were heavily promoted. The Esky Service Men's Kit, for GIs at home and abroad, included Varga girl playing cards, an Esquire datebook, giant-size Esky postcards, and Hurrell girl jigsaw puzzles. Demand skyrocketed during the war years. Between 1942 and 1943, sales of the Varga girls calendars nearly doubled from 504,000 to 1 million.(18) At the army's request, Esquire supplied copies for military hospitals and for soldiers in isolated posts. Printed on special lightweight paper, these included the legend, "These copies are supplied with compliments of Esquire for the exclusive use of the armed forces."(19) 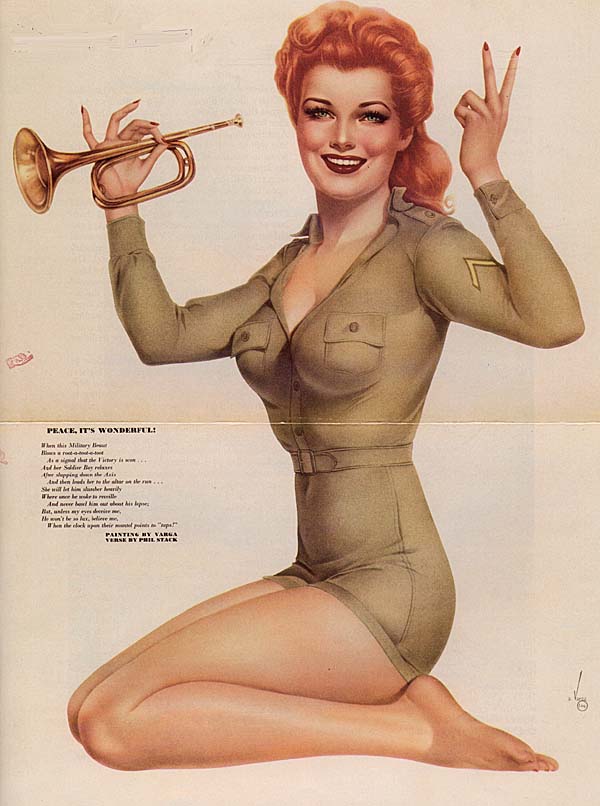 The April 1943 Varga girl and verse that offended the postal censor. (NARA, Records of the U.S. Postal Service, RG 28; © 1943, The Hearst Corporation. All Rights Reserved.)

Esquire further supported the war effort with war bond promotions and morale-boosting activities on the homefront. In the same newspapers reporting the progress of the Esquire case through the courts, we find articles describing the Esquire Award Jazz Concert starring Lionel Hampton, from which half the proceeds went to servicemen's organizations. Esquire's All American Boys Baseball game was coached by Babe Ruth and Ty Cobb. The Armed Services Editions, paperbacks issued especially for service men, featured Esquire Jazz Books for 1944 and 1945. The special armed services collection of Ernest Hemingway stories included "The Snows of Kilimanjaro," first published in Esquire in August 1936.

Under the law, Postmaster General Walker convened a hearing board made up of three of the four assistant postmasters general to hear testimony and issue an opinion. Although Esquire had previously acquiesced in prepublication reviews to ensure its mailability, it now assembled a formidable team of high-priced lawyers and well-known witnesses to oppose the postmaster general's action. Arnold Gingrich and Esquire's lawyers occupied a Washington hotel for the duration of the hearing in October and November 1943. The hearing was only the first administrative procedure, but Esquire wanted to establish a record on which to go to court. The proceeding generated 1,986 pages of testimony and hundreds of pounds of exhibits.

Postal authorities called only nine witnesses, drawn largely from Washington society, to prove its claim that Esquire's smoking-room humor overstepped the bounds of mailability. Clergy played an important role. Among the many clippings in the case file is one that shows the Methodist resident bishop of Washington, Edwin Hughes, eyeing the Varga girl for April 1943. The bishop is quoted as saying "I wouldn't care to exhibit this in my Sunday School class."(20) The accompanying verse, entitled "Peace, It's Wonderful," by Phil Stack was also deemed objectionable. It read, "When this Military Beaut/Blows a root-a-toot-a-toot/As a signal that the Victory is won . . ./And her Soldier boy relaxes/After slapping down the Axis/ And then leads her to the alter on the run . . ./ She will let him slumber heavily/When once he woke to reveille/And never bawl him out about his lapse;/But, unless my eyes deceive me,/He won't be so lax, believe me,/When the clock upon their mantel points to 'taps.'"(21)

At the hearing to determine Esquire's mailability, William O'Brian, the Post Office attorney, asked Bishop Hughes his opinion of the Varga illustration. (NARA, Records of the U.S. Postal Service, RG 28)

Appearing for the Post Office, the Reverend Peter Marshall, Presbyterian minister and chaplain of the United States Senate, addressed the changing role of women. He deplored the trend of modern morals and concluded that equality had lowered the standard of womanhood. The Washington Evening Star titled its account of Marshall's testimony, "Purity of Women Becomes Involved in Esquire Hearings." Next to the article, a photograph showed an American army nurse, coveralls rolled above her knees, wading ashore at Naples from an infantry landing craft. The caption read "Army Nurses Are in Front Lines Too."(22)