Moving On: NARA’s Role in a Presidential Transition 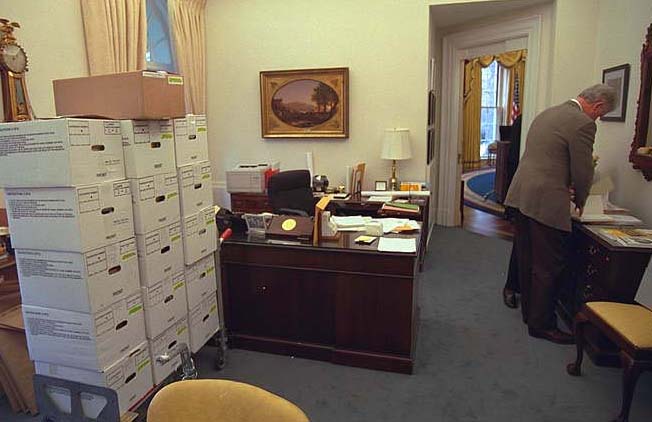 Boxes from President Bill Clinton's White House offices are packed and ready to be moved out. (Clinton Library)

After the pomp and ceremony of Inauguration Day, a new President arrives at a White House that is ready to support a new administration. This readiness is made possible by months of preparation and coordination among people from across the federal government.

The National Archives and Records Administration (NARA) is proud to play a critical role in the transition from one presidential administration to another.

Since the enactment of the Presidential Records Act of 1978, which first applied to the Reagan administration, legal custody of the President’s records are automatically transferred to NARA at noon on the last day of the administration. Right now we’re in the midst of planning a massive move, and because of the experience and expertise of our staff, we’ll be ready on January 20, 2017, when we take legal custody of President Barack Obama’s records.

When a President has served two full terms, as President Obama has, we have time to plan. The decision to build the future Obama Library in Chicago was made in 2015, and this year a temporary storage site was chosen in the Chicago area. Our staff in Washington, D.C., have been hard at work for months, packing artifacts and preparing records for eventual shipment to the Midwest. By January 20, 2017, we will have transferred hundreds of millions of textual, electronic, and audiovisual records, and tens of thousands of presidential gifts.

A significant portion of the presidential material is already in National Archives care. During a President’s administration, NARA provides the White House with courtesy storage for the artifacts and records that do not need to be physically stored in the White House compound. Courtesy storage, offered to Presidents and Vice Presidents, means that the records are in NARA’s physical possession until legal custody transfers to the Archivist of the United States. The incumbent President and Vice President maintain legal custody over the records and artifacts during their terms.

The collections being moved document presidential decision-making and policy formation. The records include the classified files of the National Security Council as well as the files documenting domestic issues, audiovisual files, and the First Lady’s files.

The future Obama Library, like its predecessor presidential libraries, will preserve the records of the events of the past eight years—the highs and the lows—and the evolution of policies that affected the nation and the world. The first presidential library—the FDR Library—opened 75 years ago on the principle that presidential papers are an important part of the national heritage and should be accessible to the public. Each library since then has operated on the same basis, and the National Archives and Records Administration ensures that presidential records in the future will be similarly preserved and available.

Join the Archivist at  his own blog and visit the  National Archives website.