Matthew Henson: From the North Pole to the Custom House

Matthew Henson, arctic explorer and assistant to Robert Edwin Peary, helped co-discover the North Pole in 1909.  He later became a clerk working for the U.S. Custom Service in 1913 in the building now known as the Alexander Hamilton U.S. Custom House, in lower Manhattan.  He worked as a clerk for 23 years on the 3rd floor of the building, the same space now occupied by the National Archives at New York City.

Designed by Cass Gilbert, and completed in 1907, the Alexander Hamilton U.S. Custom House in New York City sits at the tip of Bowling Green park. This beaux-arts masterpiece was built to house New York’s Federal Custom Service to assess and collect duties and taxes on imported goods in one of the nation’s most prosperous ports.  The building is which is open to the public is listed in the National Register of Historic Places , is designated as a National Historic Landmark and both public and interior spaces are landmarked according to New York City's Landmarks Preservation Commission 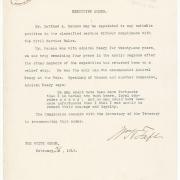