Recently [1991–1995], Prologue: Quarterly of the National Archives has featured articles about World War II in commemoration of the 50th anniversary of the attack on Pearl Harbor and subsequent U.S. involvement in the war. These articles have highlighted specific record series in the custody of the National Archives and related to World War II. This article addresses the record series in electronic form relating to World War II. Electronic records in general and those specifically related to the Vietnam conflict have been previously described.1

The National Archives is the repository for over 16,000 individual data files created by federal agencies and determined to have long-term historical value. These records include a number of data files containing information collected contemporary to World War II. Researchers studying the period or researchers seeking specific information about individuals who were affected by the war may find these data files useful.

Federal agencies have a long history of collecting information in a machine-readable format for statistical manipulation or the sorting of individual records for a variety of administrative purposes. In addition, the National Archives, shortly after its establishment in 1934, debated the record status of "punch cards."2 Punch cards were identified as record material in the first official definition of records, the 1939 Records Disposition Act. In most cases, the electronic records described in this article were originally created in punch card format. Because of changes in technology, and in order to maintain access to the records in machine-readable form for manipulation purposes, records were typically "read," or converted, from the punch card format to magnetic tape. The electronic records in the custody of the Center for Electronic Records are available to researchers either on 9-track magnetic tape or 3480-class tape cartridge.3

Record Group 29: Records of the Bureau of the Census 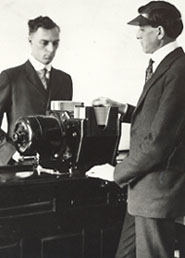 This electronic record series was assembled through a collaborative effort between the U.S. Bureau of the Census and the Center for Demography and Ecology of the University of Wisconsin.4 These data are also available from the Inter-University Consortium for Political and Social Research (ICPSR).

Data from War Relocation Authority Form 26: Evacuee Summary Data ("Locator Index"). The Evacuee Summary Data data file contains information about Japanese Americans interned in 10 camps during World War II by the War Relocation Authority (WRA). The original information was collected on WRA Form 26, coded by employees of the WRA, and keypunched by the agency. Apparently, two sets of punch cards were created: one set is in the custody of the National Archives, and the second was deposited at the Bancroft Library of the University of California at Berkeley following the termination of the WRA.6 The punch cards in the possession of the National Archives are apparently the original set produced by the WRA.7 Those punch cards were manually annotated by the WRA during the period of the camps, with information about internees' aliases, date of departure and place of destination, and other uncoded information. The punch cards deposited at Berkeley did not contain such additional information and were a basic machine copy of the "original" punch cards that were transferred to and remain in the custody of the U.S. government at the National Archives.8 In general, the Bancroft Library is the repository for those WRA records not accessioned by the National Archives.

There are 109,400 records in the electronic file.10 Information about individual internees in the data file include name, relocation project, assembly center, previous address (city, state codes), birthplace of parents, father's occupation in the United States and abroad, education, educational degrees, residence outside of the United States, sex and marital status, race of individual and race of spouse, birthdate, age, birthplace, highest grade completed, language, occupation, religion, and other social and demographic characteristics.

Record Group 330: Records of the Office of the Secretary of Defense

The American Soldier in World War II Series, 1942–1945. "The American Soldier in World War II" is a large set of opinion surveys conducted among U.S. Army personnel during World War II by the Army Research Branch (ARB) of the Army Service Forces.11 The 84 studies comprise 275 data files (137 of machine-readable documentation and 138 of survey data).12 The range of subjects studied includes race relations; the enemy; training; the U.S. Army's own publications, broadcasts, and films; our allies; combat experience; the role of women in the military; and the quality of the "demobilization experience."

These records represent one of the first attempts to collect and analyze data on public opinion and to conduct statistical analyses on the attitudes of soldiers, recruits, and combat veterans. These data were originally compiled by ARB on punch cards during the 1940s. Samuel Stouffer of the Social Science Research Council (formerly of the ARB) copied all unclassified data and used them for further studies.13 Eventually, this set of the punch cards was transferred to the Roper Center (University of Connecticut, Storrs, Conn.) and in 1978, the punch cards were read to magnetic tape. The Army Research Institute, the successor agency to the ARB, transferred a copy to the National Archives.

Record Group 389: Records of the Office of the Provost Marshal General

The punch cards that the Veterans Administration borrowed for their study were limited to records on U.S. military personnel held by the Germans and Japanese during World War II and returned to military control. The War Department had created the punch card records during World War II and transferred them to the National Archives from the Office of the Provost Marshal General as part of a series of records relating to prisoners of war, 1941–1946.15 The Veterans Administration provided the National Archives with copies of the data files created for its study. The European theater data file has 85,541 records; the Pacific theater data file has 19,202 records.

The Veterans Administration did not borrow the punch cards for prisoners of war (military and civilian) who died in camp, escaped, were civilians or non-U.S. citizens, were returned after having been missing, and possibly included other categories of persons for whom the War Department had created a punch card record.16 Therefore those punch cards were not copied to an electronic medium, and the information they contain is available only from the punch cards. In addition, a review of the records of the European Theater electronic data file indicates that some records for former POWs whose last name began with the letters V, W, X, Y, and Z (and perhaps others) were not successfully read to tape and are also excluded from the data file.

The War Department punch cards, as well as the records in the electronic data files, include the following data elements: service number, name, grade (and grade code), branch of service (and its code), dates initially reported and last reported, racial group, U.S. state of residence, type of organization, parent unit, casualty area, source of report, status, detaining power, place of detention, and a repatriation code, which sometimes indicates if the POW was on a Japanese ship that sank or if he died during transport to the Philippine Islands.17

Theodore J. Hull is an archivist in the Electronic and Special Media Records Services Division of the National Archives and Records Administration, College Park, Maryland.

4. The project was supported by National Science Foundation Grant SES-7704135.

6. See Records of the War Relocation Authority, Preliminary Inventory 77 (1955), entry 23, and Japanese American Evacuation and Resettlement: Catalog of Material in the General Library (1958).

7. This statement is based on the opinion of Dr. John Modell of the Department of History, Carnegie Mellon University.

9. This project was conducted under the direction of Dr. John Modell.

12. The computer tape on which the raw data from the surveys is stored also contains documentation data files, arranged sequentially by survey number. All of these documentation data files are together at the beginning of the tape and are followed by the raw data, also arranged by survey number. Additional documentation, in the form of codebooks, explanations of sampling techniques and methods of measurement, field notes, marginalia, original questionnaires, statements of purpose, and related reports are among the textual holdings of the National Archives. For information about these holdings, contact the [Textual Archives Services Division, Modern Military Records LICON (NWCTM), National Archives at College Park, 8601 Adelphi Road, College Park, MD 20740-6001; telephone 301-837-3510]. Selected pages from these textual records have also been incorporated as supplementary documentation for the electronic record version.