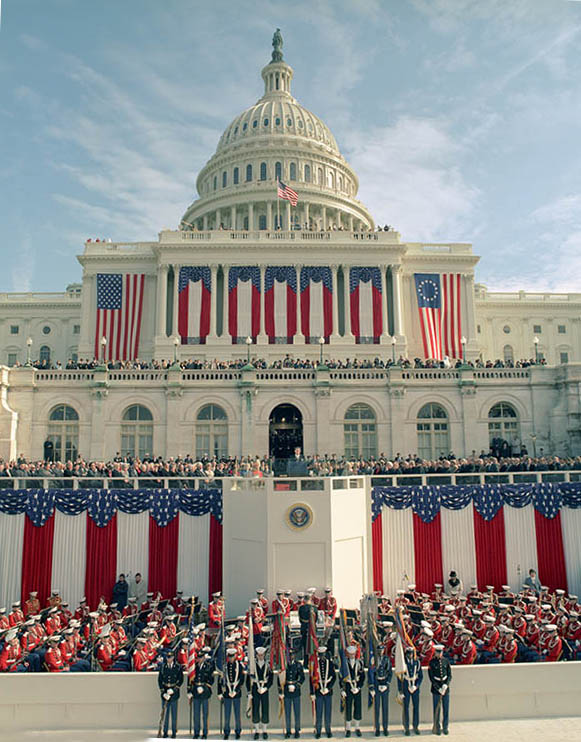 The inauguration, a ceremonial induction into office, symbolically brings together all three branches of the U.S. government when the Chief Justice (judicial branch) of the United States administers the oath of office to the President-elect (executive branch) at the Capitol, where Congress (legislative branch) meets. The ceremony includes the swearing-in of the President as well as the presidential address to the nation. Besides the official passing of the torch to a new administration, the ceremony often has other interludes. President Bill Clinton's second inauguration included an invocation from the Rev. Billy Graham, a reading from poet Miller Williams, and songs by opera singer Jessye Norman.

The oath of office is usually administered by the Chief Justice of the Supreme Court. A notable exception was George Washington's swearing-in ceremony since he had not appointed Supreme Court justices for the first administration. In emergency situations such as the death of the President, the presidential oath can be administered to the Vice President by a nearby official. Several Presidents were never actually inaugurated. John Tyler, Millard Fillmore, Andrew Johnson, and Chester A. Arthur were all sworn in after the death of the President. Gerald Ford took the oath of office in the East Room of the White House on August 9, 1974, after the resignation of President Richard Nixon during the Watergate crisis. None of these men were reelected when their terms came to an end.

Although present-day inaugurations take place on the West Portico of the Capitol, the location of the inaugural ceremony has moved around. In fact, inaugural ceremonies have not always been held in Washington, D.C. George Washington was the only President inaugurated in two cities: New York and Philadelphia. The first presidential inauguration was held on the balcony of the Senate Chamber at Federal Hall in New York City on April 30, 1789. Washington’s second and John Adams’s only presidential inaugurations were held in Philadelphia. Thomas Jefferson was the first to be sworn in as President in Washington, D.C. He had his first and second inaugurations in the Senate Chamber of the Capitol. In 1817 James Monroe offered to take his oath of office in the House Chamber of the temporary "Brick Capitol," located where the Supreme Court Building stands today, since the Capitol was under construction after the fire in 1814. Inauguration organizers could not decide which House of Congress should host the ceremony. Speaker of the House Henry Clay denied the request to have the ceremony in the temporary House Chamber and suggested the first outdoor presidential inauguration take place on a platform next to the "Brick Capitol." Many of the ceremonies occurred on the Capitol’s East Portico, starting with Andrew Jackson’s inauguration in 1829. Franklin D. Roosevelt’s fourth inauguration was held on the South Portico of the White House. Because the nation was still engaged in World War II, it was a small ceremony without all the usual pomp and splendor. Ronald Reagan’s inaugural ceremony on January 20, 1981, was the first ceremony held on the West Portico of the Capitol with its spectacular view of the Mall. Since January 20 fell on a Sunday for Reagan’s second inauguration, there was a private ceremony in the White House on Sunday at noon to fulfill the twentieth amendment of the Constitution. The official public ceremony was held the next day inside the Capitol due to the extremely cold weather.

Traditionally, during the inaugural ceremony, the President will give an address to the nation to lay out the plans and ideas for the new administration. Some inaugural addresses have been so powerful and eloquent that they are still quoted today. President Franklin D. Roosevelt remarked in his inaugural address on March 4, 1933, that "we have nothing to fear but fear itself." President John E Kennedy will be remembered for his immortal words, "And so my fellow Americans: ask not what your country can do for you- ask what you can do for your country." The shortest address in inaugural history was during George Washington's second inauguration. Delivered on March 4, 1793, the brief speech was only 135 words.The longest address was President William Henry Harrison's 8,495-word speech. Delivered on an extremely cold March 4, 1841, he consequently caught pneumonia and died one month later.

The tradition of the inaugural parade began in 1 789. George Washington had the first and longest parade. After the swearing-in ceremony, there was a thanksgiving service and dinner, followed by a tour around New York City to watch the celebration. Originally parades were merely to escort the President from the Capitol to the White House. During Thomas Jefferson's inauguration celebration, the tradition of the open house began, where the American people could come into the Executive Mansion and greet the new President. This tradition got out of hand when the crowds became so numerous and overwhelming that President Andrew Jackson felt the need to flee the White House through an open window. With the growing numbers of inaugural visitors, President Grover Cleveland decided that the festivities needed to be moved outside of the White House. Parade stands were set up to review troops in procession. Now these parades have become entertainment for the whole nation. President Clinton's second inaugural parade featured floats reflecting major turning points inAmerican history as well as marching bands, church choirs, and children's groups from all fifty states and the District of Columbia. 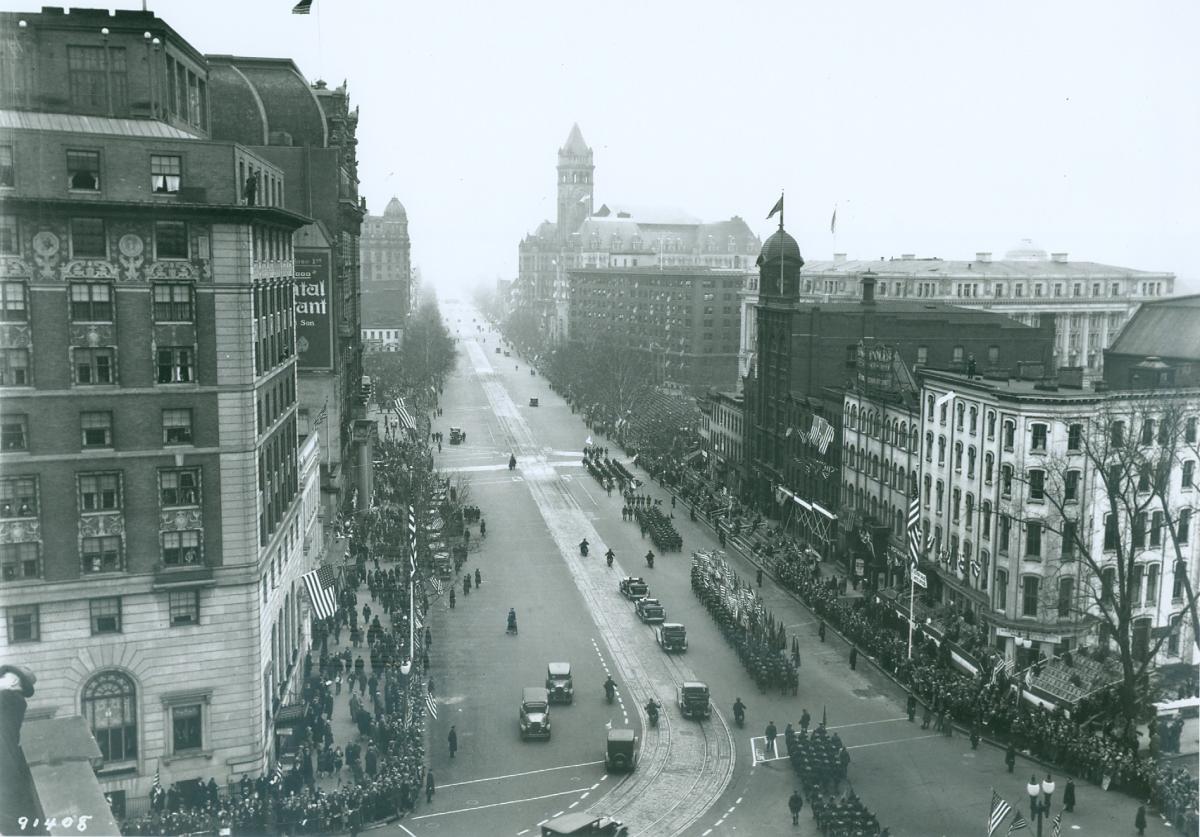 The first unofficial ball was held in honor of the first inauguration. President George Washington attended this event alone since Martha Washington had not yet arrived in New York. The first official ball as part of the inaugural celebration was in 1808 for President James Madison and was planned by his wife, Dolley. It was held in Long's Hotel in Washington, D.C., and was attended by the new President and first lady as well as outgoing President Thomas Jefferson. Guests paid four dollars to attend the festivities. Inaugural balls were also held in temporary structures, built especially for the festivities, which could accommodate more people. Large government buildings such as the Patent Office and the Smithsonian's Arts and Industries Building were also used. From 1885 to 1901, the balls were held in the Pension Building, which had a lovely ambiance and large rooms for dancing. Woodrow Wilson began an era of no official inaugural balls. He did not want to disturb the solemnity of the inaugural ceremony with festivities. Franklin D. Roosevelt brought back the official inaugural ball in 1933, but subsequent inaugurations for Roosevelt were more subdued due to the Depression and World War II. In 1949 President Harry Truman not only brought back the inaugural ball but brought in the idea of several balls so that many more people could participate and see the President and first lady. Although the festivities are part of the whole inaugural experience, each swearing-in ceremony truly marks the beginning of a new phase in American politics. It is a tribute to our forefathers that a successful election leads, time and again, to a peaceful transition of power to the successor. This transfer of power is a fine-tuned machine that ensures that there is always someone to lead the country. On January 20, 2001, another American political journey will begin, and the nation will give the "power of the people" to a newly elected President of the United States. As we celebrate this inauguration, here are some images from past presidential inaugural ceremonies, parades, and balls from the holdings of the National Archives.

[*An inaccurate reference to every President using the phrase "so help me God" was removed from the first paragraph 1/26/2017.] 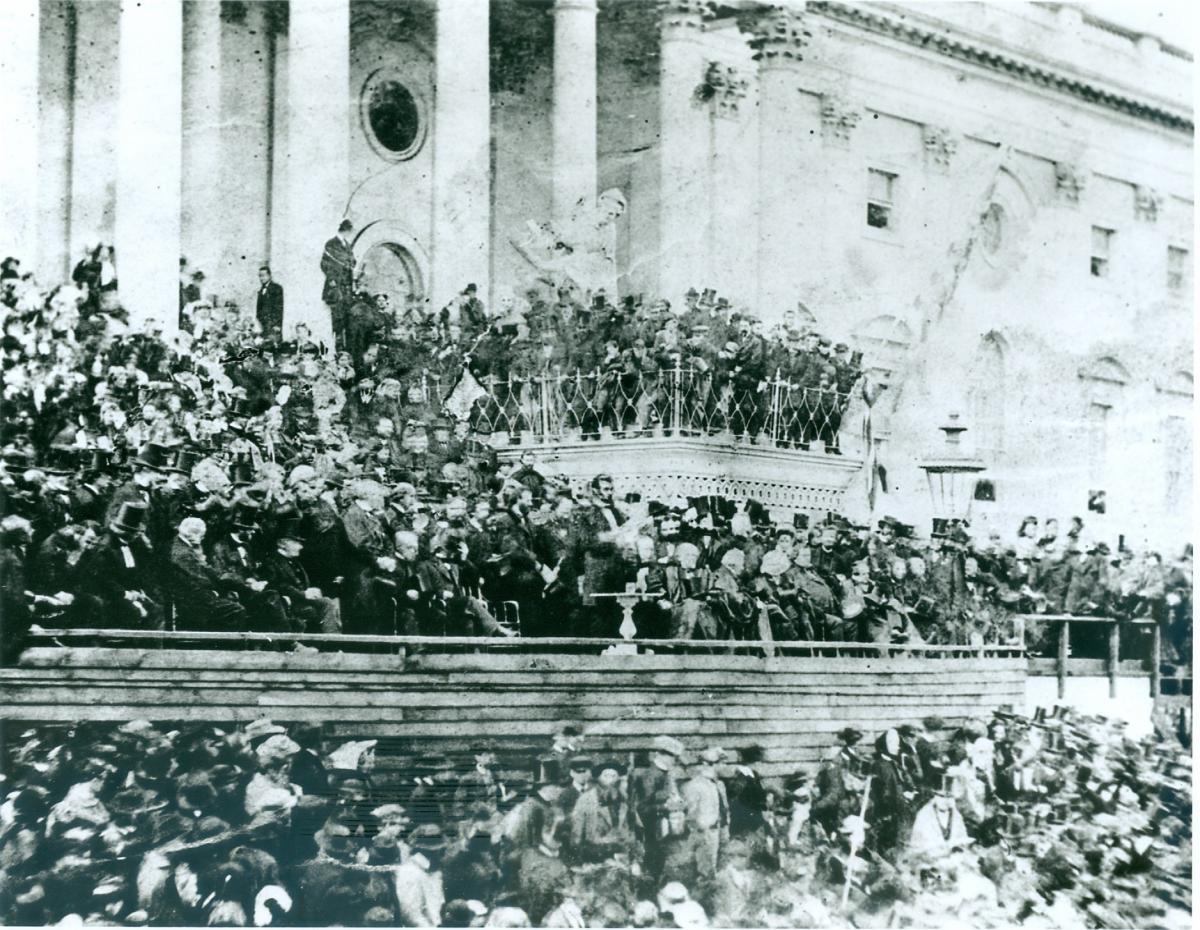 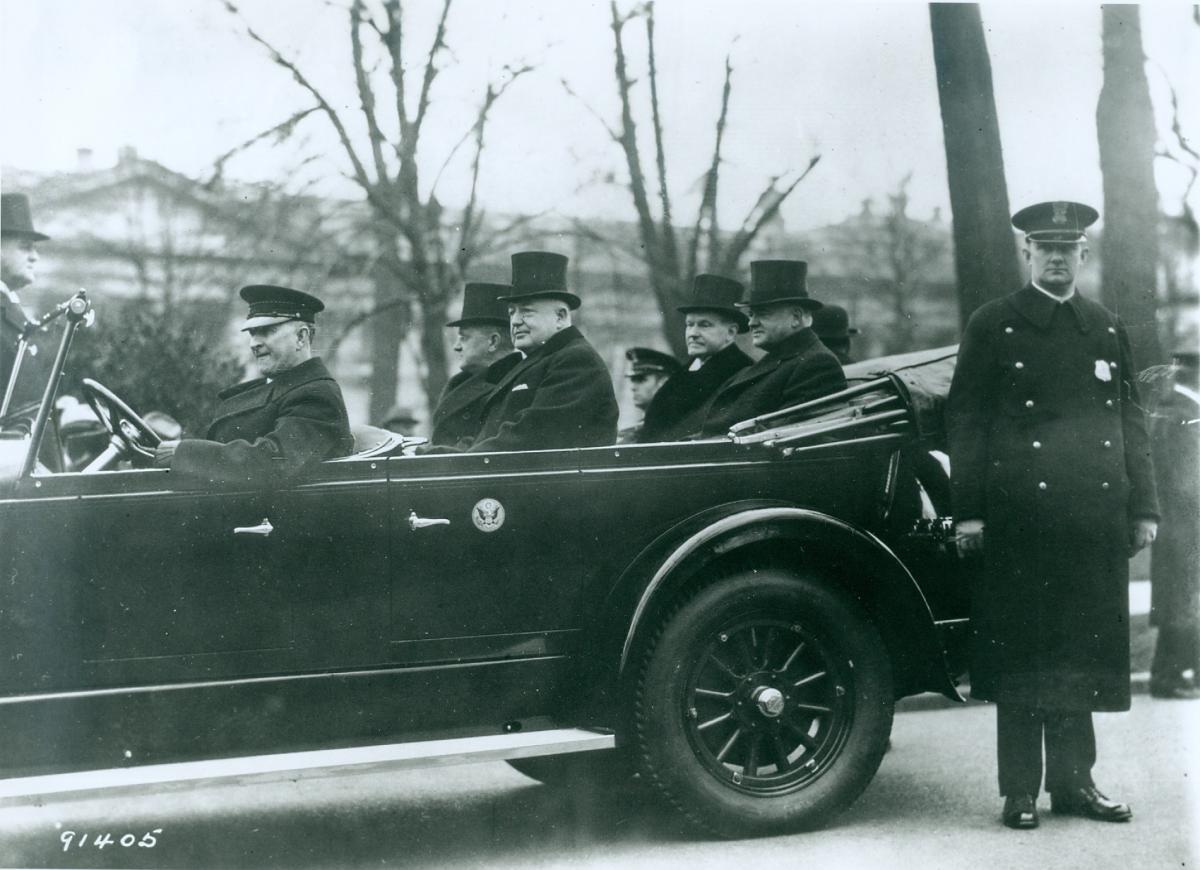 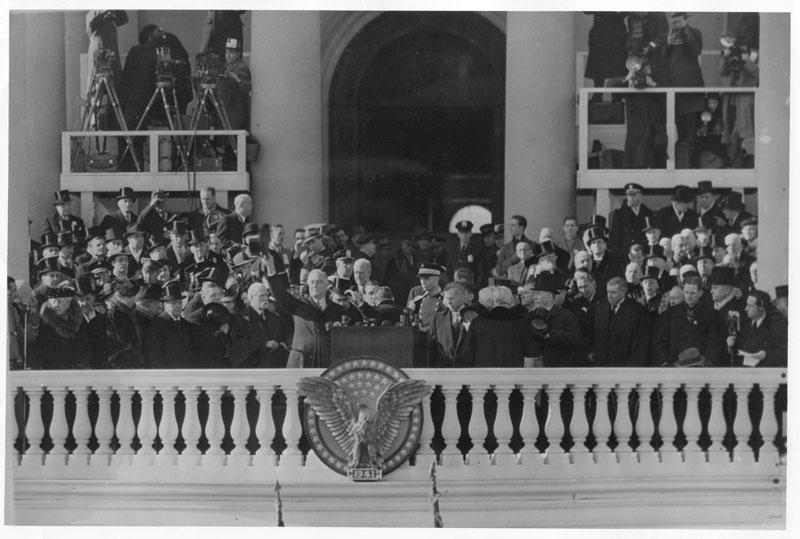 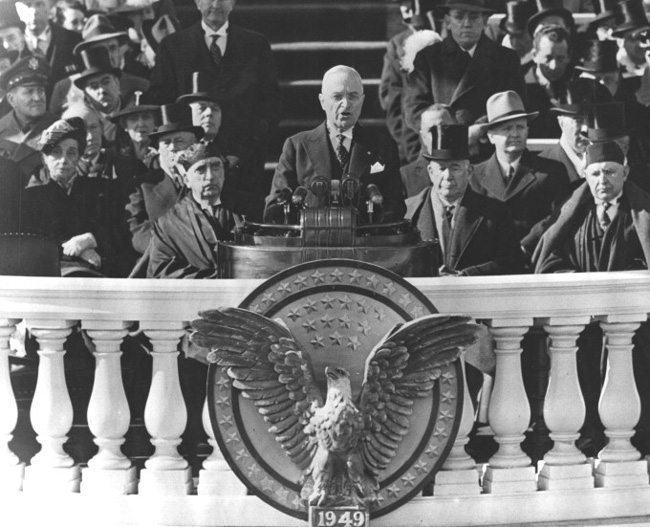 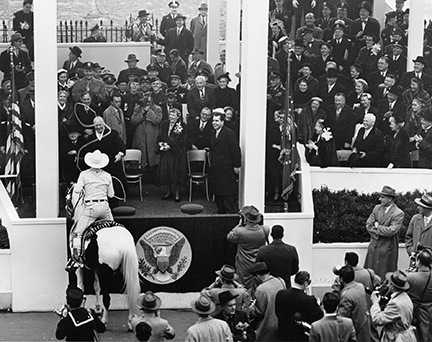 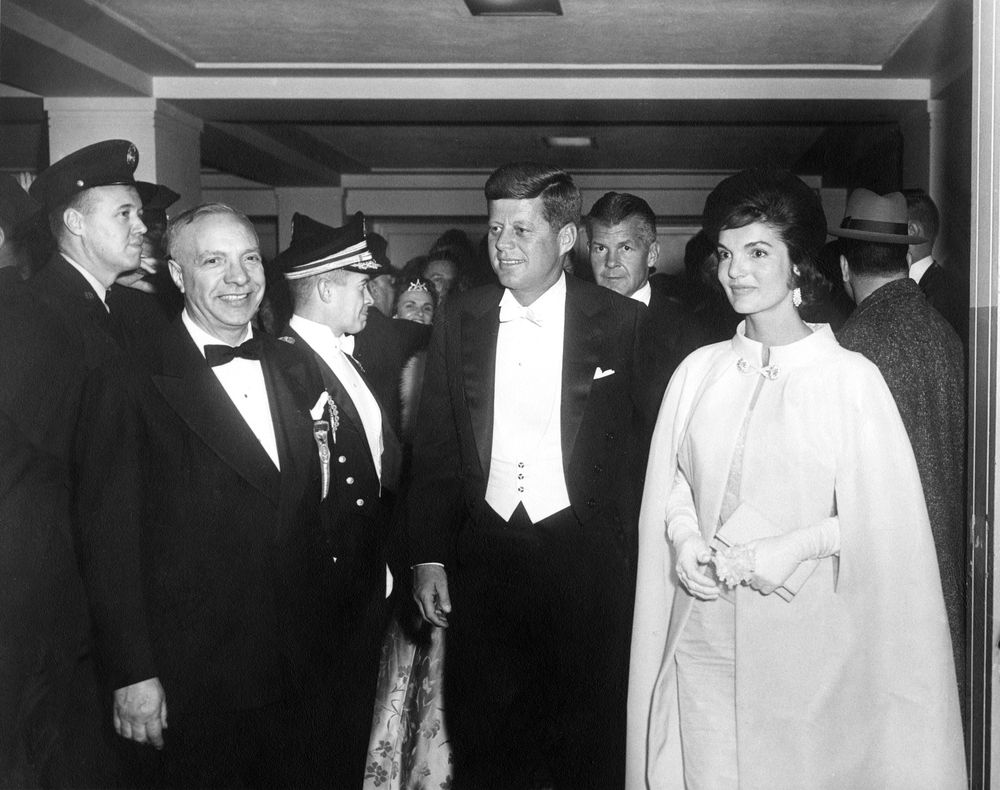 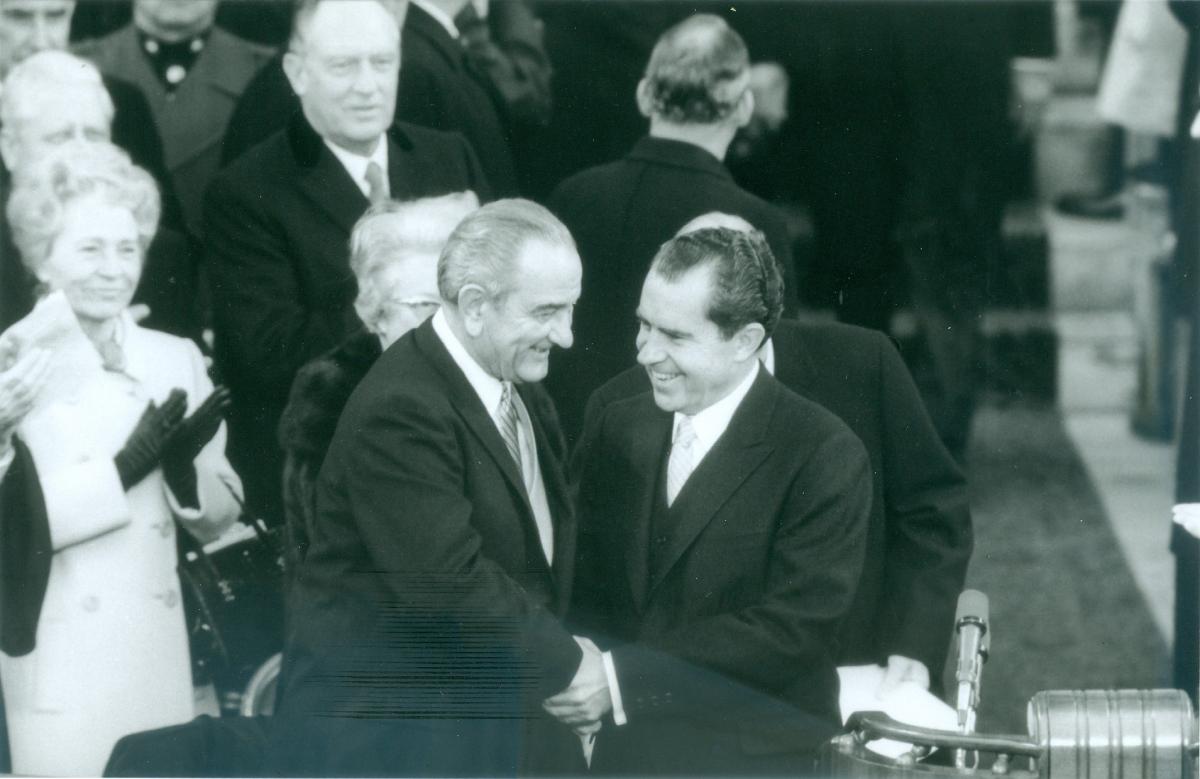 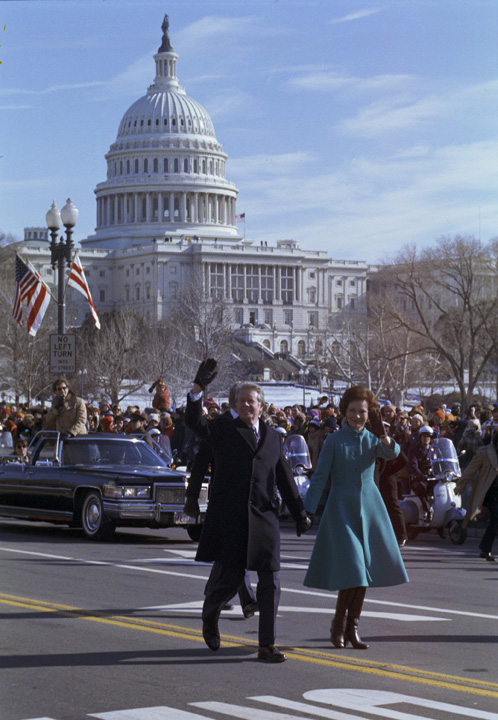 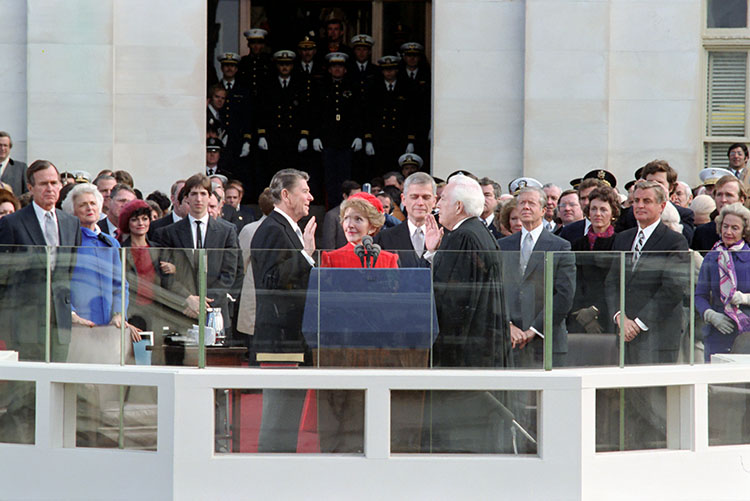 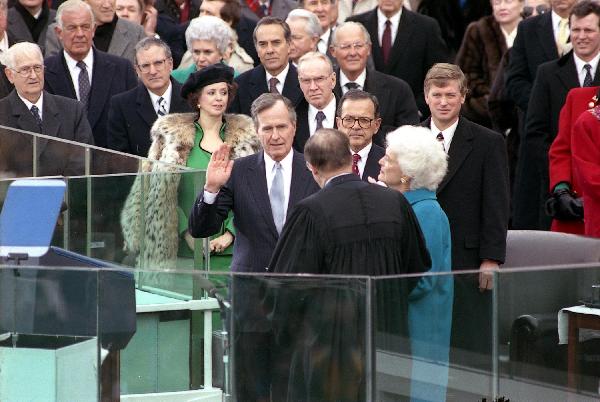 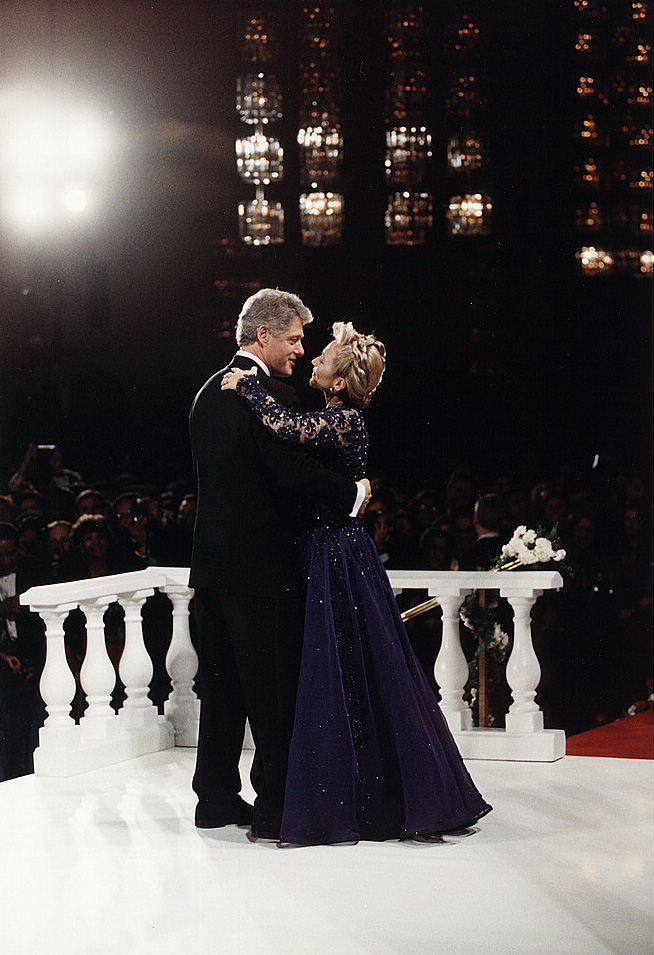