Crafting a Call to Arms 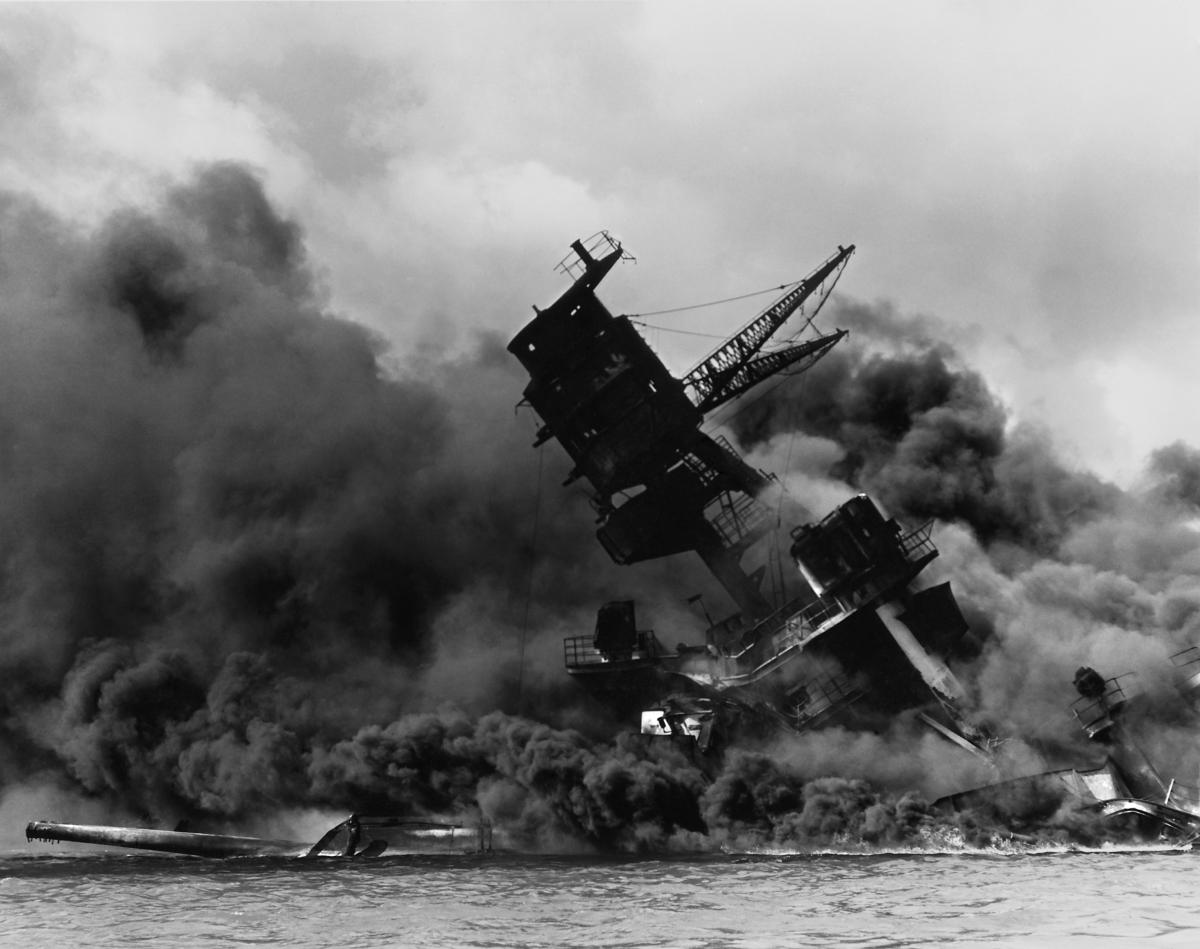 The USS Arizona seen burning after the attack by the Japanese at Pearl Harbor, Hawaii, the morning of December 7, 1941. It was 1 p.m. in Washington. (Franklin D. Roosevelt Library)

In the early afternoon of December 7, 1941, Franklin D. Roosevelt was just finishing lunch in his oval study on the second floor of the White House, preparing to work on his stamp album, when his telephone rang.

The White House operator announced that Secretary of the Navy Frank Knox was on the line and insisted on talking with him. Roosevelt took the call.

The Japanese had attacked Pearl Harbor, Hawaii, just before 8 a.m. Hawaii time, Secretary Knox told the President. Harry Hopkins, a top aide who was with Roosevelt at the time, could not believe the report. But Roosevelt did. "It was just the kind of unexpected thing the Japanese would do. At the very time they were discussing peace in the Pacific, they were plotting to overthrow it," he said. 1

For the rest of that afternoon, sixty years ago, Roosevelt and his advisers were busy at the White House receiving fragmentary reports about the damage to U.S. installations, ships, and planes in Hawaii. Security was increased around the White House, and plans for a bomb shelter for the President underneath the nearby Treasury Department building were under way. Across the nation, news of the attack spread by radio and word of mouth, and Americans began thinking about what life in a nation at war was going to be like.

Roosevelt decided to go before Congress the next day to report on the attack and ask for a declaration of war. In early evening, he called in his secretary, Grace Tully. "Sit down, Grace," he said. "I'm going before Congress tomorrow, and I'd like to dictate my message. It will be short." 2

"Yesterday, December seventh, 1941, a date which will live in world history," he began as Tully took down the words, "the United States was simultaneously and deliberately attacked by naval and air forces of the Empire of Japan." 3

Biographer Nathan Miller recalls: "He inhaled deeply on his cigarette, blew out the smoke, and began dictating in the same calm tone he used to deal with his mail. He enunciated the words incisively and slowly, carefully specifying each punctuation mark and new paragraph. Running little more than five hundred words, the message was dictated without hesitation or second thoughts." 4

Tully typed up what Roosevelt had dictated, and the President went to work on this first draft by hand. 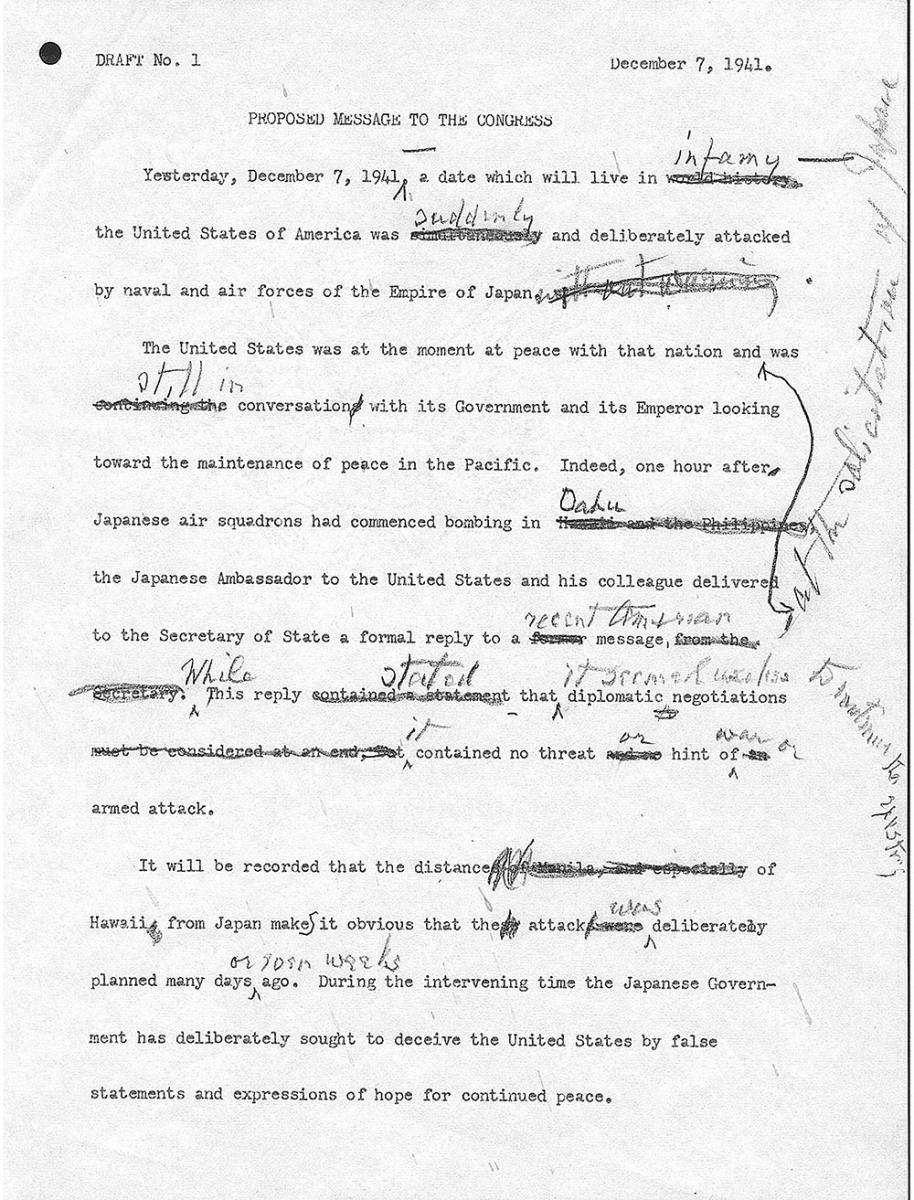 Franklin Roosevelt's changes to the first draft of his speech are clearly visible on "Draft No. 1." In the opening sentence, he changed "world history" to "infamy" and "simultaneously" to "suddenly." At one point, he considered putting the words "without warning" at the end of the sentence but later crossed them out. (Franklin D. Roosevelt Library)

Thus that first historic sentence—the one that is usually quoted from the speech—was born: "Yesterday, December 7, 1941—a date which will live in infamy—the United States of America was suddenly and deliberately attacked by the naval and air forces of the Empire of Japan."

There were other changes in that first draft also. At one point, Roosevelt noted that the distance from Japan to Hawaii meant that the attack must have been planned "many days ago." He changed that to "many days or even weeks ago." Historians now know that the Japanese had considered a surprise attack on Pearl Harbor for many years.

Drafts No. 1 and the third draft have Roosevelt's handwriting all over them, but there are none of his marks on the second draft, which makes only one change from the first draft-that of the famous first sentence.

Apparently Roosevelt took back his marked-up first draft and made more revisions, which became the third draft. Writes Halford R. Ryan: "It [a second draft] contains his emendations from draft one. Curiously, however, he did not make changes on draft two but went back to draft one and made corrections on it. That is, draft one has words on it that are not in draft two but are in draft three: therefore, draft three is actually a compilation of changes on draft one." 5

Roosevelt updated the speech too, as reports of Japanese actions arrived at the White House, adding lines to note Japanese attacks on Guam and the Philippine Islands. He also added a sentence near the end of the text: "No matter how long it may take us to overcome this premeditated invasion, the American people will in their righteous might win through to absolute victory." In other revisions, the President added further sentences to note Japanese attacks on Hong Kong, Malaya, Wake Island, and Midway Island.

Two of Roosevelt's speechwriters, Samuel I. Rosenman and Robert Sherwood, were in New York City on December 7 and did not participate in drafting the speech; the President handled this one mostly by himself. During the editing of the various drafts, Roosevelt rejected a longer version by Undersecretary of State Sumner Welles, which reviewed the events leading up to the attack on Pearl Harbor. 6

However, Hopkins had a few minor word changes and one significant addition (which he labeled "Deity")—the next to the last paragraph, which read: "With confidence in our armed forces, with faith in our people, we will gain the inevitable triumph so help us God." At some point, it was expanded to "With confidence in our armed forces—with the unbounding determination of our people—we will gain the inevitable triumph—so help us God." Along with the first sentence, it became one of the most often heard quotes from the speech. 7 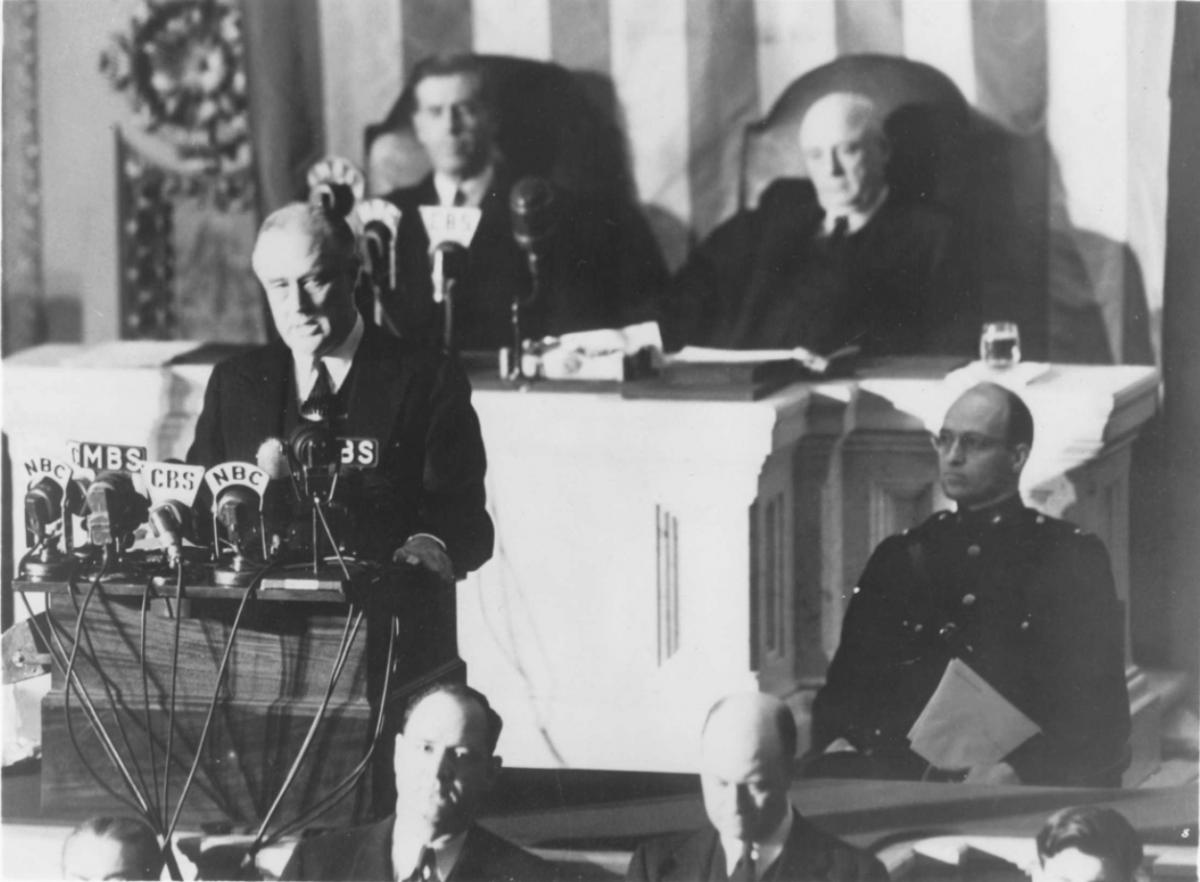 President Roosevelt delivers the "Day of Infamy" speech to a joint session of Congress on December 8, 1941. Behind him are Vice President Henry Wallace (left) and Speaker of the House Sam Rayburn. To the right, in uniform in front of Rayburn, is Roosevelt's son James, who escorted his father to the Capitol. (Franklin D. Roosevelt Library)

Rosenman, Sherwood, and Hopkins were usually involved in drafting major speeches, along with others in the government, depending on the subject. Usually, a speech took from three to ten days to prepare, far longer than the December 8 speech. But Rosenman insisted that all the speeches eventually were Roosevelt's. "The speeches as finally delivered were his-and his alone-no matter who the collaborators were. He had gone over every point, every word, time and again. He had studied, reviewed, and read aloud each draft, and had changed it again and again, either in his own handwriting, by dictating inserts, or making deletions. Because of the many hours he spent in its preparation, by the time he delivered a speech he knew it almost by heart." 8

Rosenman also wrote: "The remarkable thing is that on one of the busiest and most turbulent days of his life, he was able to spend so much time and give so much thought to his speech." 9

Roosevelt's speech amounted to a call to arms for a national audience that would suddenly need to shift to a war footing that meant wage and price controls; shortages of food, fuel, and other strategic materials; and, of course, the induction into the armed forces of their sons, husbands, fathers, and sweethearts.

The next day, at 12:30 p.m., in the House of Representatives, Roosevelt delivered his six-minute address to a joint session of Congress and a nationwide radio audience. He was interrupted several times by applause and departed only a few times from the wording on the final draft of the speech, which included four minor handwritten changes. One of them qualifies the sentence "In addition American ships have been torpedoed on the high seas between San Francisco and Honolulu." Roosevelt used the term "reported torpedoed."

When Roosevelt delivered the speech, most of his on-the-spot changes involved word order. But many people had never heard of Oahu, the Hawaiian island on which Pearl Harbor and Honolulu are located, so it became "the American island of Oahu" to establish the fact that America had been attacked. And the sentence "Very many American lives have been lost" became "I regret to tell you that very many American lives have been lost." In fact, 2,403 Americans died in the attack.

UPDATE 12-2-2016: Since this article was written, an investigation by the Roosevelt Library and the Center for Legislative Archives in 2014 confirmed that the “reading copy” remains a missing document. Neither the House copy nor the Senate copy, both doubled-spaced typewritten, is the “reading copy” that President Roosevelt used while speaking, the investigation concluded.

The “reading copy,” typed triple-spaced and in a loose-leaf binder, has not been seen since James Roosevelt brought it back to the White House after the speech on December 8, 1941, and placed it atop a coat rack.

Usually, when addressing Congress, Roosevelt brought back to the White House the "reading copy" of the speech he had just given. But on this occasion, he did not have it when he returned to the White House. A search of his coat, and that of his son James, who had escorted his father, was made. He even wrote to James, asking about it.

"I have had a howl go up from the Library at Hyde Park and from Grace here that you have taken away with you the war Message to Congress," FDR wrote his oldest son. "As a matter of fact, it probably ought to be in the Government permanently because they have everything else and this particular one is just about the equal in importance to the First Inaugural Address." 10

But James Roosevelt didn't have it either, and it was thought to be "lost"-for forty-three years. In 1984, an archivist at the National Archives and Records Administration discovered the copy in the records of the Senate, which had been sent to the National Archives Building. Roosevelt apparently had left the copy on the lectern after he finished speaking to the joint session or handed it to a clerk. In any event, a Senate clerk wrote "Dec 8, 1941, Read in joint session" on the back and filed it away with Senate records.

Today, NARA's Center for Legislative Archives at the National Archives Building holds both the Senate reading copy (Record Group 46) and another copy, virtually identical to the Senate copy but typed separately, in the House records (Record Group 233). The final "as given" version, with changes made by the President during delivery, is held by the Roosevelt Library in Hyde Park, New York.

The Prologue staff expresses its thanks to Alycia Vivona of the Franklin D. Roosevelt Library for her kind help in providing documents and background material for this article. Our thanks also go to Raymond Teichman of the Roosevelt Library and Rod Ross of the Center for Legislative Archives.