Reports from the Front 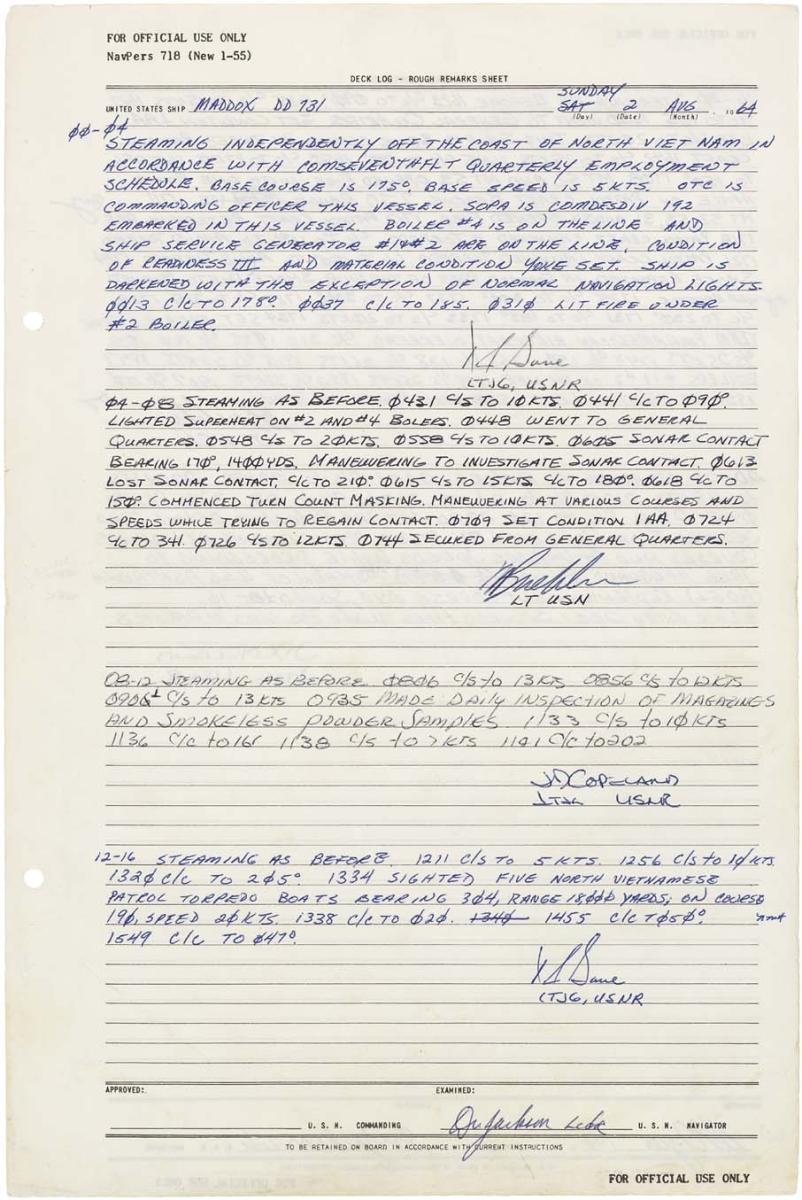 Deck log of the destroyer USS Maddox, which was gathering electronic intelligence in the Gulf of Tonkin on August 2, 1964.

In times of war, events are recorded not just by top military leaders but also by ordinary men and women serving in the field. This is the premise behind "Reports from the Front," a new exhibit being developed for the National Archives Experience.

The National Archives has always taken special pride in preserving the records of those who have served and protected our nation. Among the most compelling of those records are the ones created at the small-unit level. Rather than chronicling the activities of entire armies or fleets, they convey the experience of a battalion, a company, an individual ship.

"Reports from the Front" will showcase small-unit accounts of military engagements from the Revolutionary War to the Vietnam War. Many of these engagements were important or decisive, marking an opening or a turning point in the war. The accounts, however, were simply written in the course of daily duties, during or soon after the battle. The writers did not think of themselves as historians or even as history-makers; they were just doing the paperwork of their jobs. Their reports remind us of the real human beings who lived through these experiences, and they give us a sense of the reality of warfare.

Some of the reports convey the writer's perception of the engagement. One such report was written by Capt. John Parker, commander of the Lexington, Massachusetts, militia, a few days after the Revolutionary War's first battle, in April 1775. In testimony for the Continental Congress, he explained that British officers were "riding up and down the Road, stopping and insulting People as they passed" and that a number of British troops were on the march from Boston. He described how he and his militia met to confer about the situation and how they decided not to "meddle or make with said Regular Troops." His sense of outrage and injustice is clear in the conclusion of his report:

[U]pon their sudden Approach, I immediately ordered our Militia to disperse and not to fire. Immediately said Troops made their appearance and rushed furiously, fired upon and killed eight of our Party, without receiving any Provocation therefor from us.

Some of the reports are poignant. After the fall of Fort Sumter, South Carolina, in April 1861, Maj. Robert Anderson, commander of the Union garrison, painted a vivid picture of conditions at the fort—and of the dignity with which his defeated garrison marched away. In a telegram to the secretary of war, Anderson wrote:

Having defended Fort Sumter for thirty four hours until the quarters were entirely burned the main gates destroyed by fire. The gorge walls seriously injured. The magazine surrounded by flames and its door closed from the effects of heat. Four barrells and three cartridges of powder only being available and no provisions remaining but pork. I accepted the terms of evacuation offered by General Beauregard . . . and marched out of the fort Sunday afternoon the fourteenth inst. With colors flying and drums beating. Bringing away company and private property and saluting my flag with fifty guns.

Much briefer, but no less poignant, is a report from the "Lost Battalion." During World War I, the U.S. Seventy-seventh Infantry Division attacked the Germans near Charlevaux, France. Only one unit penetrated enemy lines: Maj. Charles W. Whittlesay's First Battalion of the 308th Infantry Regiment. The battalion was quickly surrounded by Germans—and then came under friendly fire from its own artillery. Whittlesay used his last carrier pigeon to send this three-sentence plea: "We are along the road paralell 276.4. Our artillery is dropping a barrage directly on us. For heavens sake stop it."

The barrage stopped about an hour later. A few days after that, the battalion was relieved by friendly forces.

Some of the reports are matter-of-fact. Conveyed without emotion, they nonetheless give the sense of the confusion and urgency of battle. One such report consists of a single page from the journal of the operations section of the Thirty-first Infantry Regiment in Korea. The page captures the details of a forty-minute period in the battle to capture a heavily contested position called Pork Chop Hill.

At the top of the page, we join the battle in progress. It is 3:30 in the morning on April 17, 1953. Reports are streaming into the operations center from a variety of participants. Colonel Kern, the regimental commander, is not sure whether critical American units are in position. Corporal Worley notes the repositioning of flare ships—aircraft that drop flares to turn night into day. From an observation post, Corporal Kuhn reports observing hand grenade and small arms fire but does not say whether it is Chinese or American fire. Colonel Kern points out that his reserve is committed; he has no more troops to put into the fight. Gen. Arthur Trudeau, commander of the Seventh Infantry Division, is willing to allocate troops from another unit, but only if absolutely necessary.

Another matter-of-fact chronicle comes from the deck log of the destroyer USS Maddox, which was gathering electronic intelligence in the Gulf of Tonkin on August 2, 1964. The log tells that at 1638 the ship was approached by three Vietnamese patrol craft. At 1718 and again at 1721, the log states simply, "Patrol craft launched a torpedo" and notes that the ship changed course "to avoid torpedo." Smoke is reported in the forward part of the ship. This brief incident, along with a reported incident two days later, would lead Congress to pass the Gulf of Tonkin Resolution, which authorized the President to respond to military aggression without further congressional consultation—and which greatly widened the scope of U.S. involvement in the Vietnam War.

"It was such a small action," said Will Sandoval, one of the exhibit's curators. "It took place on one four-hour watch. But it was such a turning point, and it had such a wide-ranging impact. The ramifications are still being felt today, when you look at Presidents committing U.S. troops around the world."

Exhibit team member Stephanie Moore did much of the research. "What I find fascinating about the exhibit," she said, "is that it's from the perspective of the people actually fighting the fight. Usually, you hear about these incidents from the perspective of a Johnson or an Eisenhower. In these documents, you get a sense of what it was like to be there at that moment. You're being shot at. Torpedoes are being launched at you. Your own side is dropping artillery on you. What do you do? What if your only option is to send a pigeon with a message?"

The documents reveal a great deal about how the nature of both warfare and language have changed over time. The telegram about the fall of Fort Sumter, for example, highlights the formality of nineteenth-century warfare and language, as the defeated commander marches away "with colors flying and drums beating . . . saluting my flag with fifty guns." Compare that with the Lost Battalion's pithy plea: "For heavens sake stop it."

One of the exhibit's reports speaks without words. It's the track chart of the Eighth Air Force's 306th Bombardment Group for August 17, 1943. The map shows a trail of little circles; the circles tell a story of a daring mission with devastating consequences.

During World War II, Schweinfurt was the center of the German ball-bearing industry. Eager to destroy the factories and cripple the German military machine, American military planners decided to try a massive deep-penetration daylight raid. The bombers would be more vulnerable, but the targets would be more visible. 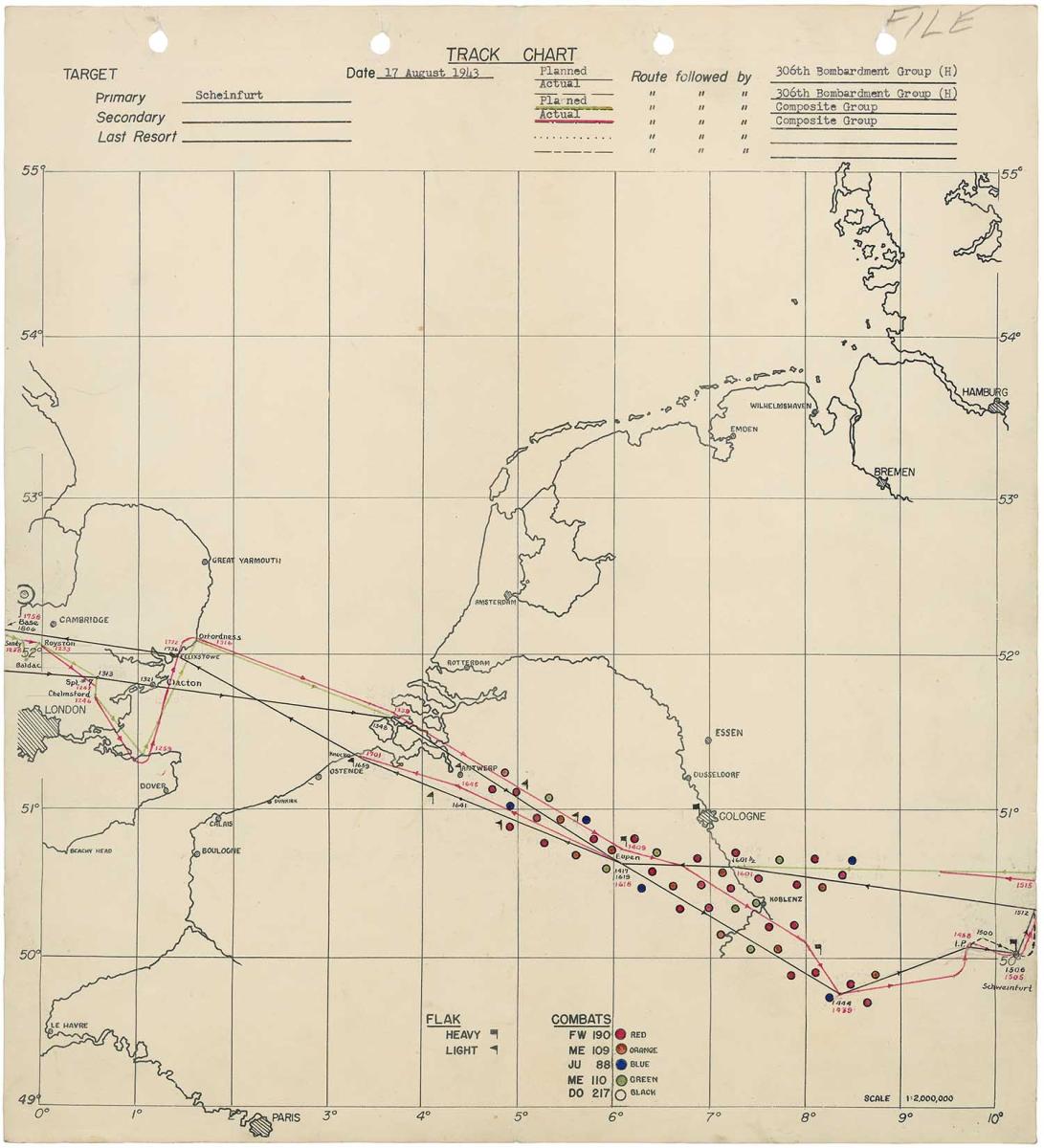 The 306th Bombardment Group flew from bases in England to southeastern Germany. Lines on the map show the flight path. Soon after the lines cross into Germany, circles begin appearing alongside them. What do the circles tell us?

"They tell us that the Americans were getting hammered," said Bruce Bustard, another of the exhibit's curators.

The circles represent all the different kinds of German fighters the bombardment group encountered. The little flags represent flak—anti-aircraft artillery. "You can see they were under attack most of the way," Bustard pointed out. The Eighth Air Force did inflict heavy damage on its German targets, but at a great cost. One in six B-17 Flying Fortresses were lost that day—and more than five hundred aircrew.

The exhibit will open with these six documents, providing glimpses of six major American wars—the Revolutionary War, the Civil War, World War I, World War II, the Korean War, and the Vietnam War. Since the documents are all originals, no one document will be displayed permanently. Over time, they will be replaced by others, allowing a large number of small-unit records to be highlighted. The team is already looking ahead to the next documents, some of which will highlight lesser-known wars. Repeat visitors to the National Archives Experience will gain an ever-expanding understanding of records that capture moments when ordinary Americans changed the fate of our nation.