Brown v. Board of Education of Topeka

"Today, education is perhaps the most important function of state and local governments."
—Chief Justice Earl Warren, Opinion on Segregated Laws Delivered May 1954 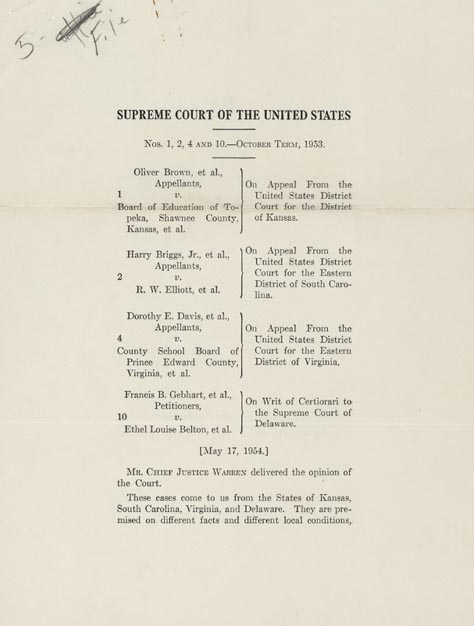 First page of the landmark Supreme Court decision in Brown v. Board of Education of Topeka. (Records of the Supreme Court of the United States, RG 267)

When the United States Supreme Court handed down its unanimous decision in the landmark Brown v. Board of Education of Topeka case fifty years ago this spring, it thrust the issue of school desegregation into the national spotlight.

The ruling that "separate educational facilities are inherently unequal" brought racial issues into the forefront of the national consciousness as never before and forced all Americans to confront a racially divided society and undemocratic social practices. At the same time, the decision opened the floodgates of decades of school desegregation suits in both the North and the South.

But the ruling did much more than that. It gave impetus to a young civil rights movement that would write much of American history during the next few decades.

The school segregation issue was ripe for being brought to the first tier of social concerns. Elsewhere in American society, segregation was breaking down.

In 1947, Major League Baseball saw its first black player in Jackie Robinson. In 1948, President Harry S. Truman ordered the desegregation of the armed forces, which had already seen black and white Americans fighting side by side in World War II. That same year, under the guise of states' rights, racial issues split the Democratic Party.

School segregation came at a high cost even outside of the human costs. For example, school districts had to maintain two school systems within one geographical area. Prior to 1954, Topeka, Kansas, maintained half-empty classrooms in segregated schools in order to keep the races separate. After Brown, this pattern continued with racism disguised as "freedom of choice"—justifying building new schools in outlying areas as merely a response to the population shift to new subdivisions rapidly being built in the western areas of the city (which turned out to be predominantly white and upper class). Left behind were the less affluent, primarily black, residents who had little choice but to send their children to outdated and increasingly inferior schools.

Brown also caused Americans to revisit the role of the national government in regulating local issues. Century-old arguments, reminiscent of the debates over slavery, were revived to defend the primacy of states' rights over federal jurisdiction. The same language used to defend slavery was now being used to defend segregation. Words like "interposition" and "nullification"—which hadn't been heard for more than a century—were used to defend school segregation.1

In recognizing the importance of education as the foundation of a democratic society, the Brown decision expressed the sentiments of Thomas Jefferson that publicly funded education was to be the primary mechanism to develop a natural elite and to ensure that the new republic had a literate citizenry regardless of social class. Jefferson's beliefs were reflected in the words of Chief Justice Earl Warren, who justified the significance of education in the Brown decision as being "the very foundation of good citizenship."2

The Topeka Brown case is important because it helped convince the Court that even when physical facilities and other "tangible" factors were equal, segregation still deprived minority children of equal educational opportunities.

Over the years, numerous scholars have traced the history of the Brown case and analyzed its impact as federal legislation. Yet most of these studies have been written from a national perspective, distant from the day-to-day life of the local people most affected by school desegregation.

The Topeka Brown records provide a glimpse of what people were doing in their local communities, where the struggle for racial justice was a continuing reality, year in and year out. The records help us to understand the reality of school segregation in places like Topeka, where it was only legal in the elementary schools. What was the effect of "separate-but-equal"?

Overview of the National Case before the Supreme Court

These cases all document inadequate funding for segregated schools—meaning that many black children lacked playgrounds, ball fields, cafeterias, libraries, auditoriums, and other amenities provided for white children in newer schools. In Summerton, South Carolina, and Hockessin, Delaware, school buses were only provided for whites, while black children had to walk. In Claymont, Delaware, and Farmville, Virginia, there was no senior high school for black pupils.

The Brown case of Topeka, Kansas, itself included twelve other plaintiffs besides Oliver Brown, whose daughter Linda was being bused twenty-one blocks from her home to a segregated school. The nearest school in her neighborhood was only a few blocks away, but it was for whites only.

All of these cases were appealed to the Supreme Court, and the first round of arguments were held December 9 - 11, 1952. The following June, the Supreme Court ordered that a second round of arguments be heard in October 1953. When Chief Justice Fred Vinson, Jr., died unexpectedly of a heart attack in September, President Dwight D. Eisenhower nominated California Governor Earl Warren to replace Vinson. The Court rescheduled Brown v. Board arguments for December. On May 17, 1954, the Court declared that racial segregation in public schools violated the equal protection clause of the Fourteenth Amendment, effectively overturning the 1896 Plessy v. Ferguson decision mandating "separate but equal." 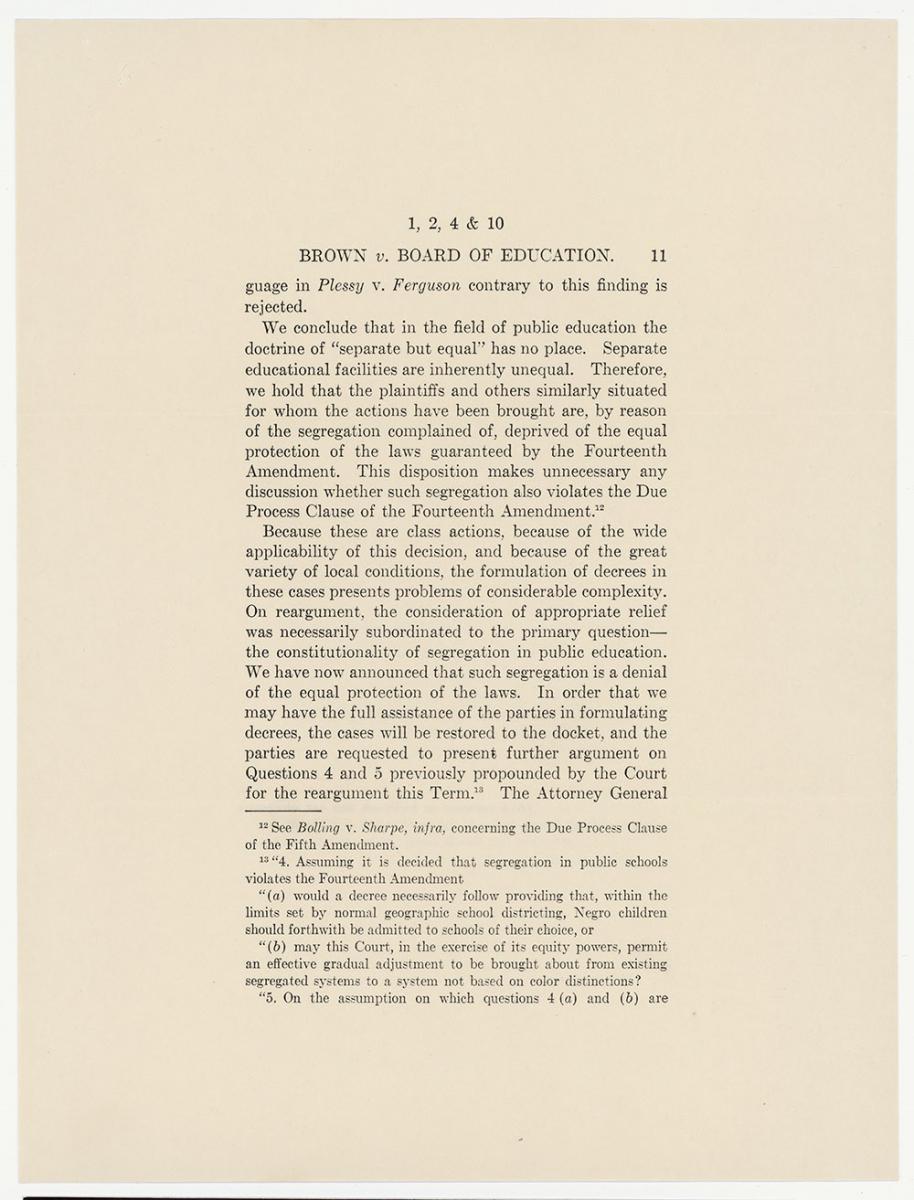 Page 11 of the landmark Supreme Court decision in Brown v. Board of Education of Topeka, which states that the doctrine of "separate but equal" has no place in public education. (Records of the Supreme Court of the United States, RG 267)

Though the 1954 ruling declared racial segregation in public schools unconstitutional, it did not specify how this was to be remedied. Originally the Court scheduled arguments on this subject for later in the year, but it did not hear what would become the third round of arguments in Brown until April 1955.4 On the last day of its term, the Supreme Court ordered desegregation to begin with "all deliberate speed."

In the intervening year, the District of Columbia and some school districts in other states had voluntarily begun to desegregate their schools. However, state-sanctioned opposition to desegregation was already well under way in Alabama, Georgia, Mississippi, South Carolina, and Virginia, where the Court's decision had been declared "null, void, and no effect." Across the South, schools were closed and public education was suspended. Public funds were disbursed to parents to subsidize the education of their children in private schools. Some states even went so far as to impose sanctions on anyone who implemented desegregation.

Effects of the Supreme Court Decision in Kansas

In Topeka, resistance to desegregation was more indirect, subtle, and covert. Historically, the color line in Kansas was more permeable than it was South Carolina or Virginia. Its "border state" ideology was directed more toward racial collegiality and inclusion than animosity and exclusion. Kansas had relatively permissive segregation statutes (compared to some southern states).

For example, segregation was permitted in elementary schools where the population exceeded fifteen thousand (cities of the first class). The one segregated high school—Sumner High School in Kansas City, Kansas—had been established in 1905 after a special act of the legislature allowed segregation of a secondary school in this one instance. However, Kansas's permissive racial statutes served to disguise the underlying reality of an unwritten code of racial separation that rivaled locales where total de jure public segregation was practiced. Topeka's continued segregation of its public school system after Brown illustrates how the dismantling of a de jure system of segregation does not necessarily include the end of racist social practices.

Over the several decades following Brown, covert opposition to desegregation was carried out under cover of school redistricting and convoluted attendance boundaries. It was also aided by real estate developers riding the postwar housing boom, who urged white Topekans to buy new houses and move to the newer—and racially homogenous—western suburbs. The City of Topeka obliged this migration by annexing western territory several times between 1950 and 1979. There was a corresponding rise in demand for more schools from the Topeka Board of Education and its successor, Unified School District #501. Between 1957 and 1966, Topeka witnessed the creation of an "alternative predominantly white, school sub-system generally around the peripheral boundary but specifically concentrated in the southern and western portions of the Topeka school system." New schools built after 1959 would have pupil racial ratios that would be all or disproportionately white. Additionally, classroom additions and portable classrooms would be primarily placed at disproportionately white schools.

Though the official end of segregation in 1954 met with far less hostility in Kansas than in Mississippi or South Carolina, African Americans still encountered obstacles. News correspondent Carl T. Rowan had found Topeka to be a "pretty segregated city" when he lived there as a navy trainee during World War II. Returning to Kansas in 1953, he described his earlier experiences by observing, "Topeka was a paradox. There was no Jim Crow in some areas where you had expected it; segregation had deep roots where it was not expected."

The state's permissive segregation laws meant that overt segregation was strictly limited, while covert segregationist practices arose unrestrained. "There was no segregation on city buses, or in any public transportation," Rowan recalled. "But I was unable to go to a movie or into a restaurant with white navy buddies. Hotels, bowling alleys and other public recreation facilities were closed to Negroes."

A decade later and just a few months before the first Brown decision, Rowan still found it difficult to find a restaurant willing to serve him and his companion, attorney Charles Scott, the original lawyer involved in the Brown case. Despite the legal demise of segregation, informal segregation was still intact. Rowan and Scott were asked by one restaurant owner to eat in the kitchen not because of any law requiring racial separation, but simply because it was his "policy." As an attorney, Scott understood that it was much easier to remove segregation laws than to confront and change the informal racial practices that permeated the embarrassing day-to-day reality of racial segregation. "And it stems from Jim Crow schools," Scott declared to Rowan as they left one restaurant without being served, "because when segregation is part of the pattern of learning it permeates every area of life."

In Kansas, the antecedents of the Brown case can be traced back through eleven previous lawsuits challenging segregation. Beginning in 1880, these suits all challenged the legality of school segregation as it was practiced in Kansas.5 Of the three cases that involved Topeka's schools, two are especially relevant to the Brown case. The earliest case, dating from 1901, involved the introduction of segregation in recently annexed areas (the Reynolds case), and the other case (the Graham case in 1940) involved the decision of whether or not junior high schools fell under the state's segregation statutes.

Similar patterns of racial upheaval and containment, begun with the annexation issues related to the Reynolds case and the limitation of segregation to elementary schools as illustrated by the Graham case, continued throughout the Brown litigation.

"In approaching this problem," Chief Justice Warren wrote in 1954, " we cannot turn the clock back to 1868 when the [Fourteenth] Amendment was adopted, or even to 1896 when Plessy v. Ferguson was written. We must consider public education in the light of its full development and its present place in American life throughout the Nation. Only in this way can it be determined if segregation in public schools deprives these plaintiffs of the equal protection of the laws."

In Kansas, both the Reynolds and Graham cases illustrate the development of the issues that came to fruition nationally in the Brown case.