Blazing the Trail for Women in Law, Part 2

Lockwood's bustling household was situated in the center of downtown Washington, a location that was neither quiet nor fashionable. But more important to Lockwood was the ease with which she could reach the local courts as well as the federal offices and chambers she visited as she expanded her claims, patent, and pensions practice. Until June 1879 the U.S. Court of Claims (the court in which individuals prosecute a claim against the government) occupied 12 rooms up the hill from her house, in the basement of the Capitol. In that year the court was relocated not far from her at 1509 Pennsylvania Avenue. 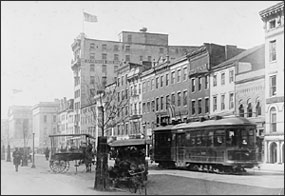 The 600 block of F Street, NW, was an active location for Washington's legal community in the late 19th century. (Library of Congress)

Her F Street home put her across the street from the Patent Office, which also housed the Bureau of Indian Affairs, with which Lockwood did business. Perhaps most fortunate for the Lockwood law firm was the selection of a site barely one block from her home for the new Pension Building, completed in 1887.

The 600 block of F Street was, in fact, a hub of legal activity. Washington's legal tradepaper, The Washington Law Reporter, operated out of rooms at 633 F Street, NW, and several attorneys had offices on that block. Like Lockwood, they were eager to be near the buildings housing federal departments as well as the District courthouse.

In 1881 Lockwood shocked Washingtonians, who thought that riding was immodest for women, by acquiring an adult's tricycle. Lockwood was not immodest. She was a practical 51-year-old woman, a health enthusiast who was comfortable with modern technology and unafraid of publicity. With resolute determination, she took up the tricycle, making herself fair sport for columnists. She rode several miles daily, going to federal departments, the Capitol, and the courts. Cycles were "freedom machines." The head of the Lockwood law firm bought hers after seeing that the male attorneys who used them were completing their work more quickly.

Lockwood practiced law in the fashion of Washington men with small, street-level firms, her days a busy mix of clients, paperwork, and court appearances. A large number of her early civil cases consisted of the collection of debts from loans made, or money owed, for business transactions.

Clients suing for divorce were also a staple of her practice. In March of 1874, Lura wrote in her newspaper column that the divorce business was getting "very lively," with Washington "likely to rival Chicago in this branch of the trade." She was referring to the increased number of divorce petitions as well as a recent suspenseful case in which her mother outfoxed Frederick Folker, a postal employee, who was about to flee to California to avoid paying her client's court-ordered alimony. Using a detective and application for a writ of exeat regno ("to restrain a person from leaving the kingdom"), Lockwood—described by Lura as "the lynx eyed attorney"—brought the court evidence of Folker's refusal to pay and intended flight. The writ was issued and the ne'er-do-well ordered to give bonds for alimony and costs or go to jail.

As a woman, Lockwood always had to think about her image and used gentle forms of humor to soften the public's view of her or to win a favor. When Lebbens Stockbridge brought a suit against her for $847 that he claimed to have placed in her hands as trustee, she reproached him in a 53-line rhyming poem that asked the court's indulgence:

Oh! Cruel creditor thus to sue
For money charged as overdue,
And go into the Court and swear
To things as light as empty air;
And strive to get a judgment sum
Before the day of Judgment come;
You know I'd pay that little bill
Just as you fixed it in your Will . . .

She argued that Stockbridge had given her the money to hold for certain people "to whom she meant to leave it by will" but told the court that she would execute the trust.

Most of the time, she was more restrained. Male attorneys in Washington considered her a proper colleague, and some shared case work. One of these collaborations, Kaiser v. Stickney, provided the opportunity for her first oral argument before the U.S. Supreme Court, a quiet but historic appearance marking the first time that a woman member of the bar participated in argument.

The court heard Kaiser on appeal from the Supreme Court of the District of Columbia on November 30 and December 1, 1880. Lockwood was listed as counsel along with Mike L. Woods. The case involved the execution of a deed that bound local property for the payment of a debt. Lockwood had been lawyer for Caroline Kaiser, the appellant, since 1875. With some irony, she tried to use the much-criticized D.C. married women's property laws to her client's advantage by arguing that Kaiser, a married woman, could not legally be party to a contract that encumbered her own property. The strategy failed, and Kaiser was appealed to the U.S. Supreme Court, which because of the District's unique status, was the court that heard appeals from decisions of the D.C. Supreme Court. 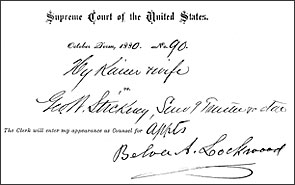 Twenty-one months earlier, Lockwood had become the first woman member of the high court bar. Now she stood with Woods, who began their presentation with the same argument made before the D.C. court. He and Justice William Strong fell into a heated discussion of the law. According to the Evening Star, which gave the story front-page coverage, Lockwood rose at the conclusion of this exchange and asked to be heard. The justices agreed and she spoke for 20 minutes, giving her view of the case and, although she and Woods lost the appeal, making history.

Retirement Was Not for Her

If the docket books are to be trusted, Belva eased out of courtroom work in the mid-1880s. She did not refuse civil and criminal trial work—several dramatic cases lay in her future—but either the money was not sufficient, or her increasingly long trips as a public lecturer, a second career that she cultivated after her first presidential campaign, made it difficult to attract clients. In the place of trial work, Lockwood expanded her pension and bounty claims business, with Lura and Clara handling much of the paperwork. Lockwood later wrote that the office handled 7,000 pension cases from the 1870s through the 1890s. This was a respectable number although small in comparison with pension claims baron George E. Lemon, who told members of Congress that, just in the 15 years after the Civil War, his law firm had processed 50,000 filings and appeals.

In her 70s and early 80s, Lockwood balanced a career in law with tours on the lecture circuit and growing responsibilities as a member of the Universal Peace Union, a small pacifist organization. In 1906, in a multiparty case, she represented the Eastern Cherokee in their appeal before the U.S. Supreme Court. This time, unlike her appearance in Kaiser, she made a successful argument, and her clients shared in a multimillion dollar settlement. In 1912 she took on the last important case of her career, successfully representing Mrs. Mary E. Gage in lunacy proceedings, before a jury, that followed accusations Gage had threatened to kill prominent Washington banker Charles J. Bell.

A woman of great energy, at the age of 83 Lockwood led a group of women on a tour of Europe. Until her final illness, she was marching on the streets of the capital in support of woman suffrage and international peace. She died in Washington, D.C., in 1917 at the age of 86. Three years before, she had told a reporter that a woman might one day occupy the White House: "It will be entirely on her own merits, however. No movement can place her there simply because she is a woman."

The docket books and case files used in this study of Belva Lockwood's early legal career are part of the Records of District Courts of the United States, Record Group 21, National Archives and Records Administration, Washington, D.C. Norgren has surveyed the docket books of the district courts for the years when Lockwood practiced law (1872–1913) and will post the file numbers of all of Lockwood's cases on a web site to be established at the time the biography is published. Archives staff member Robert Ellis provided valuable assistance and is much appreciated for his commitment and contributions to this project.

Belva Lockwood: Blazing the Trail for Women in Law, Part 1

Jill Norgren is a writer and professor emerita of government and legal studies at John Jay College and the Graduate Center, the City University of New York. This article draws upon material from her biography, Belva Lockwood: An Uncommon Life, to be published in 2006; a study supported with grants and fellowships from the PSC-CUNY Research Fund, the National Endowment for the Humanities, and the Woodrow Wilson International Center for Scholars. Norgren is the author of several books, including The Cherokee Cases (University of Oklahoma Press) and, with Serena Nanda, American Cultural Pluralism and Law (Praeger; forthcoming in the 3rd edition).