Dwight D. Eisenhower's name was forever enshrined in the history books on June 6, 1944, when the Allied armies under his command landed on the coast of France and began the long drive to defeat the Nazi army and hasten the end to World War II.

However, Eisenhower's decision to launch the long-awaited invasion of Europe on D-day was not one that was easily made. As the optimal meteorological window for the invasion approached, he received in his rural English headquarters constant updates about troop and equipment readiness, the movements of the German army in France, and of course, the weather over the English Channel.

Now, high school students whose parents were not even born on that day, one of the most historic of the 20th century, are able to experience what Eisenhower and his commanders in Operation Overlord experienced in the spring of 1944.

They can do it at the Dwight D. Eisenhower Library in Abilene, Kansas, in a program called "Five Star Leaders," named in honor of Eisenhower's five-star rank as General of the Army.

In Five Star Leaders, students visit the library for a half-day and assume the roles of Eisenhower and his commanders as they receive reports, in the form of facsimiles of the actual documents from 1944, that provide the information that Eisenhower used in making the decision to invade the continent with landings on Normandy.

The purpose of the program is to teach today's students about democratic leadership and decision making by immersing them in a scenario from the pages of history. Using role-playing, original documents, and dramatic re-creations, students practice newly acquired leadership and decision-making skills as they work their way through a crisis faced by historical figures decades before.

To date, more than 500 Kansas and Missouri students in grades 8 through 12 have traveled to Abilene to participate in Five Star Leaders. In addition, midlevel officers at the School of Advanced Military Studies at Fort Leavenworth, Kansas, have visited the library and participated in the program.

"Five Star Leaders, as well as the White House Decision Center at the Truman Library, are examples of the ways in which National Archives–related entities can make history education more exciting, more engaging, and more meaningful for students," said Archivist of the United States Allen Weinstein. "These programs are enormously helpful in showing how we can strengthen the civic literacy efforts that are a pivotal priority of NARA's Strategic Plan for the coming decade."

Even though the climax of Five Star Leaders is the onsite visit at the Eisenhower Library, a good deal of work (Modules One through Four) is completed at the students' own schools before they come to to Abilene.

Module One and Module Two focus on learning about leadership theories and identifying examples in documents selected by archivists from the library's holdings. In all, 57 "leadership" documents, numbering more than 150 pages, were selected for use in the program. The documents vary in length, reading difficulty, and type—ranging from letters to speeches to reports and memorandums to leadership manuals to oral histories. Many members of the Eisenhower Library staff were involved in the research, development, preparation, and vetting of materials for the program.

Module Three materials feature background for Operation Overlord and biographies of those responsible for planning and implementing it. Students randomly select historical characters they will portray from a cast of 32 political and military leaders.

Because there is not sufficient time for students to examine each document with equal care, students must prioritize and distribute them among team members. They then summarize their findings and assessments in a "briefing report," which they will present at the Eisenhower Library during the re-creation of the May 15, 1944, "dress rehearsal" for Operation Overlord.

Module Five brings students to the Eisenhower Library in Abilene to experience the intense days in the spring of 1944 leading up to the D-day decision. A brief background video covering the period from January through mid-May 1944 quickly draws students into the experience.

Students next relive history in a dramatic re-creation of the May 15, 1944, final briefing for Operation Overlord. A student-narrator sets the scene, followed by inspirational oratory from students portraying General Eisenhower, Field Marshal Montgomery, and Prime Minister Winston Churchill. The six planning teams, each headed by a group captain, brief the assembled leaders on the status of the operation. After the briefing, each team is escorted to an unknown "top secret" location by an Eisenhower Library volunteer. There, a new packet of up-to-the-moment Overlord documents—boldly stamped in red "top secret"—is presented to the group captain.

From time to time, as team members work to decipher and analyze the latest documents, their deep concentration is interrupted by the crackle of a two-way radio delivering the latest intelligence updates. Each team emerges from the 90-minute session with a recommendation for General Eisenhower and his commanders: to launch Overlord for June 6, 1944—or to postpone.

Recommendations for General Eisenhower in hand, the teams convene in the library's auditorium to recreate the famous June 5, 1944, Commanders Conference. Stage props evoke the original scene in Southwick House in Portsmouth, England. As the narrator paints the scene, lighting and sound effects emphasize that this was a gloomy and stormy morning.

Group Captain James Stagg, chief meteorologist, delivers the all-important weather forecast. One by one, each group captain delivers a recommendation for the Supreme Commander. General Eisenhower may question his commanders, but it is he who must make the call.

Following his decision to go ahead with the invasion on June 6, Eisenhower composes his "In Case of Failure" message, sharing his thoughts with the audience as he writes. A sound recording of the "Order of the Day," in Eisenhower's own voice, resonates throughout a silent auditorium. General Eisenhower does have the option of postponing the invasion, which, to date, only one student, portraying Eisenhower, has exercised.

Either decision prompts a press conference at which Eisenhower and his commanders must defend the Supreme Commander's decision. Other students, former planners and commanders themselves, portray World War II war correspondents such as Walter Cronkite, Edward R. Morrow, and William Randolph Hearst, Jr.

As the day comes to a close, the "rest of the story" is revealed through actual film footage of D-day. A decision to postpone leads to a counterfactual history with disastrous consequences for the Allies and for General (and never-to-be President) Eisenhower.

Five Star Leaders traces its roots to the presidential libraries' flagship experiential-learning program: the White House Decision Center at the Truman Library in Independence, Missouri. There, students also use facsimiles of original documents to trace the evolution of major decisions made by President Harry S. Truman, such as the Berlin blockade in 1948 and the beginning of the Korean War in 1950.

The Eisenhower Foundation hired the same consultant who helped the Truman Institute develop the White House Decision Center, Linda Segebrecht, to collaborate with the author in developing Five Star Leaders. The D-day decision had been selected as the first historical scenario early in the process, and work on program development began in earnest in January 2004. 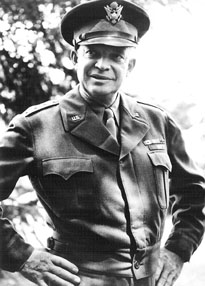 Teaching leadership through decision making was a good fit. Eisenhower's universal appeal as a role model for great leadership translated into strong symbolism for the program. His well-developed leadership style and decision-making preferences provided the foundations for Five Star Leaders.

A second scenario for Five Star Leaders, which focuses on President Eisenhower's actions during the Little Rock school desegregation crisis in 1957, is being developed.

In addition to Kansas high school students, active Army officers also benefit. Parts of the Five Star Leaders program have been adapted for students in the U.S. Army's School of Advanced Military Studies at nearby Fort Leavenworth. Majors, lieutenant colonels, and colonels study facsimiles of the original D-day documents and have been able to apply some lessons to today's military situations.

Input from experienced classroom teachers has been essential, both to the development and the continuing refinement of the program. A group of nine Kansas secondary social studies teachers served on the Teacher Advisory Group. They also participated in piloting the program through the spring of 2005.

In addition, teachers who bring classes to Five Star Leaders complete an onsite evaluation, which is used to fine-tune the program. The program meets state standards for a variety of subjects and lends itself to team teaching and interdisciplinary courses. The program's instructional approach and learning activities earn high marks, as do the teacher materials and student handouts.

When asked if the program is worth the expenditures of money and time—all in short supply in schools today—teachers have responded enthusiastically with comments like, "Yes, most definitely" and "Yes—excellent learning experience."

The assessments of students who have participated in the program to date have been highly complimentary. (Only one student has responded that he or she would not recommend Five Star Leaders to other students.)

Student-participants represent a broad spectrum of interests, backgrounds, and abilities, including special education students, regular classes, and gifted and advanced placement students. Though the composition of each group is unique and each individual distinctive, at the end of the day, the anticipated transformation regularly takes place.

Through the power of an intense shared experience, students practice democratic principles and processes, explore personal responsibility and self-assessment, and learn how to build a consensus that promotes the common good—all the while immersed in the pivotal moment of history when the tide began to turn in World War II.

Dan Holt, director of the Eisenhower Library, said the Five Star Leaders program has far-reaching benefits. While study of original documents provides lessons in history, he said, it also offers lessons in leadership that will stay with the students long after they have forgotten the details of history.

"Participants learn how to apply those leadership principles to decision making as individuals and as members of a team," Holt said. "NARA is providing not only a history lesson in these programs but also leadership development for both young people and adults."

As a lesson in history, it seems to be working. As one student commented: "Now and in the future on June 6, I will think about what the men went through and thank them for what they did for our country."

Kim E. Barbieri is the education specialist for the Eisenhower Library and Museum. She holds a bachelor's degree in Spanish and a master's degree in political science from Kansas State University. Before joining NARA in 2002, she taught for 22 years in public secondary schools.