The National Archives as “First Preserver” 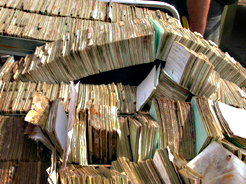 Hurricanes Katrina and Rita, which struck the Gulf Coast states of Louisiana, Mississippi, Texas, and Alabama last year, devastated the lives of millions of Americans who lost loved ones, homes, and jobs.

But also at risk for the victims of Katrina and Rita were records that document the individual and collective memories of this region—"identity loss."

Imperiled were (and still are) records such as property deeds, birth certificates, and personal papers, as well as records documenting rights and entitlements, such as Social Security and veterans' benefits—all crucial in the recovery and rebuilding processes.

Also at risk were records that document the routine operation of the federal government—the actions of regional offices of departments and agencies and federal courts in those areas—as well as records of state and local governments.

As "first preserver" of such documents at the national level, the National Archives and Records Administration helps to assess, recover, and preserve these irreplaceable records. NARA staff spent the post-hurricanes weeks working with federal agencies and our partners in state and local government to begin to identify and recover records. We sent both financial resources and staff from around the country to the affected areas and will continue to do so as long as needed.

Here are some of the things the National Archives has done to date:

Because we also have a professional responsibility to ensure the preservation of nonfederal historical records that tell the story of America, I took several actions in my capacity as chairman of NARA's National Historical Records and Publications Commission (NHPRC).

Emergency grants of up to $25,000 from NHPRC's fiscal year 2005 funds were authorized for the state archives in Texas, Louisiana, Mississippi, and Alabama for disaster assessment and response activities. Additional grants in each state of up to $100,000 from FY 2006 funds will be considered as soon as those funds are appropriated. NHPRC has been working closely with the Council of State Archivists and the Society of American Archivists to identify other funds and sources of support.

Individual units and individual staff members at the National Archives also stepped forward to offer assistance. When the Federal Emergency Management Agency sent out a call for federal employees to volunteer to work for a month in the hurricane-damaged region, quite a few staff members applied.

At the Federal Register, editors stopped the presses to add publication of an important Treasury Department ruling that allowed financial institutions to cash government assistance checks for Hurricane Katrina victims without requiring identification, which in many cases had been lost.

Foundations and institutes affiliated with the presidential libraries contributed nearly $83,000 to a special fund to aid Katrina victims.

NARA has begun working with the 50 state archivists to produce damage response plans for post-disaster records preservation, response, and recovery.

We are also seeking a "seat" at the Federal Emergency Management Administration table, since archivists and officials in charge of public records are not now represented in the Department of Homeland Security's current disaster response process.

In the aftermath of the unprecedented damage to a large part of the Gulf Coast region, we have learned once again the vital importance of access to records, not only to governments and institutions but also to individuals and families.

For our part, the National Archives will continue working diligently to fulfill its mission to provide expertise in the areas of records management, disaster response, and preservation.