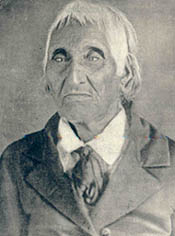 An 1890 Bureau of the Census report on Indians has a few items of genealogical importance. This portrait of Governor Blakesnake was accompanied by the date and place of his death. (Misc. Docs. of the House of Representatives for the 1st Session of the 52nd Congress, 1891—92, serial set volume 3016)

An examination of the annual census records from 1860 to 1890 shows the beginnings of the enumeration of Native Americans in the census. Article I, section 2, of the Constitution requires a census to be taken every 10 years so that seats in the House of Representatives can be apportioned among the states. Section 2 excludes "Indians not taxed"—those Indians living on reservations or those roaming in unsettled areas of the country.

The first federal decennial census that clearly identifies any Native Americans is the 1860 census.1 The instructions to the 1860 census enumerators defined who was to be counted and who was not:

Indians not taxed are not to be enumerated. The families of Indians who have renounced tribal rule, and who under state or territory laws exercise the rights of citizens, are to be enumerated.2

By the phrase "Indians not taxed" is meant Indians living on reservations under the care of Government agents, or roaming individually, or in bands, over unsettled tracts of country.

Indians not in tribal relations, whether full-bloods or half-breeds, who are found mingled with the white population, residing in white families, engaged as servants or laborers, or living in huts or wigwams on the outskirts of towns or settlements are to be regarded as a part of the ordinary population of the country for the constitutional purpose of the apportionment of Representatives among the States, and are to be embraced in the enumeration.3

The 1880 census act clearly states that "Indians not taxed shall be omitted from the enumeration" but then adds:

the Superintendent of [the] Census may employ special agents or other means to make an enumeration of all Indians not taxed, within the jurisdiction of the United States, with such information as to their condition as may be obtainable.4

Because federal government officials made actual counts or estimates of not taxed Indians, we can calculate the percentage of Indians included in each census:

These figures exclude all Native Americans living in Alaska. The Census Bureau reported the 1860 and 1870 not taxed Indian totals as part of the taking of the census for those years. In 1860, an attempt to provide an actual count was made, but in 1870, an estimate for portions of the not taxed Indian population was made. In 1880, the Office of Indian Affairs completed a count of not taxed reservation or agency Indians.6 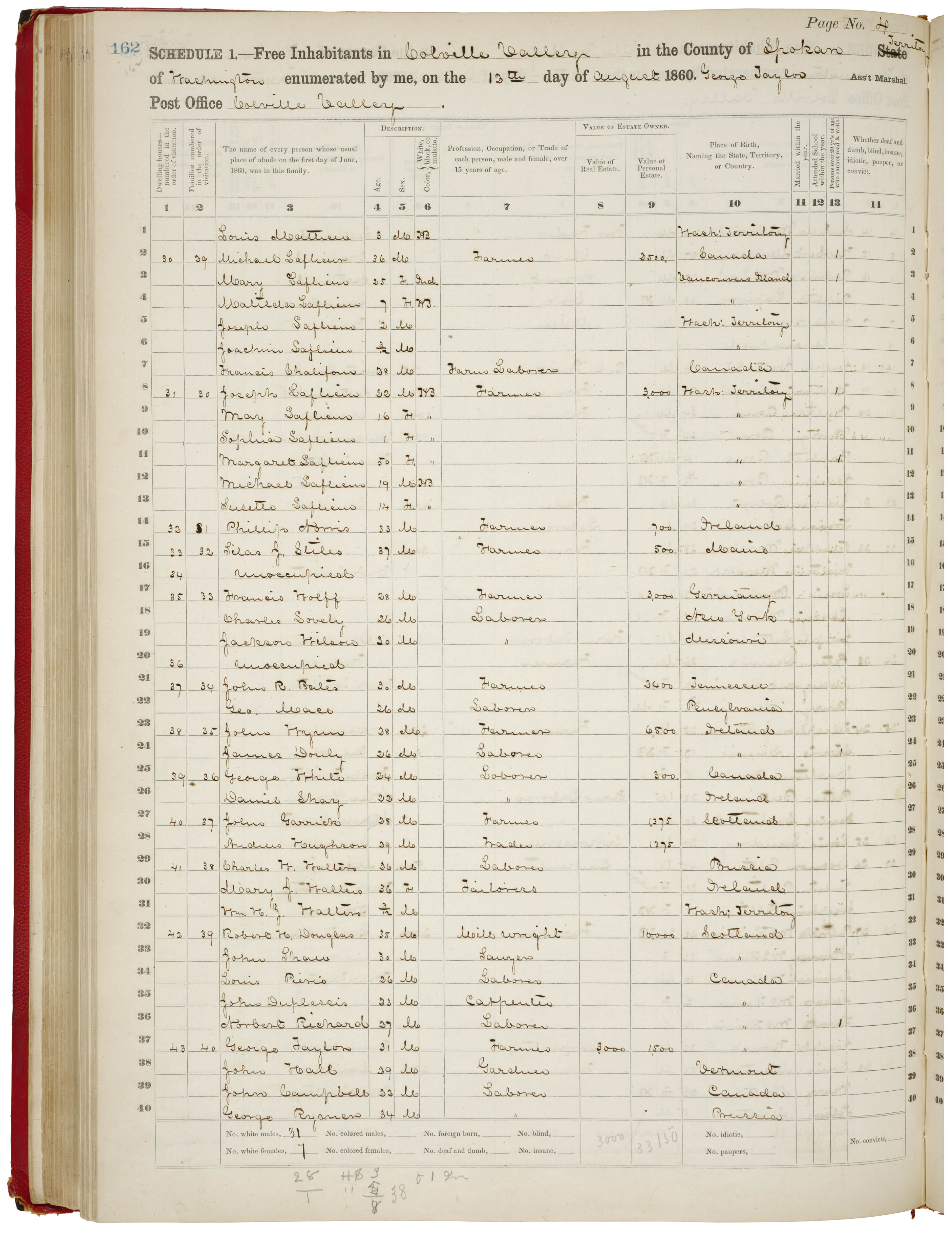 On this page from the 1860 census, the enumerator indicated persons of mixed Indian/white heritage as HB, or half-breed. (Records of the Bureau of the Census, RG 29)

The count of taxed Indians in each census includes a number of persons of mixed Indian/white heritage. A close review of the census returns for Washington Territory identified many instances of mixed heritage, the majority of whom were the children of Indian women and white men.8 For the most part, persons of mixed heritage were identified in the column for color as "HB" (half-breed) or "½ I." A report of the 1870 census describes how persons identified as "half-breed" were counted:

Where persons reported as "Half-breeds" are found residing with whites, adopting their habits of life and methods of industry, such persons are to be treated as belonging to the white population. Where, on the other hand, they are found in communities composed wholly, or mainly of Indians, the opposite construction is taken.9

There are some cases in which the coding for persons of mixed heritage is "I" or "W" and, in rare cases, "Mu" (mulatto) or "B" (black).

Occasionally, Indian reservations are identified in the census, but only rarely are any Indians enumerated. As has been stated, Indians living on reservations were not taxed and, therefore, not counted. A review of the Washington Territory census returns, for example, identified a few reservations, but no Indians were enumerated.

There are rare instances in which Indians living on reservations were enumerated. The 1880 census for Dakota Territory, for example, identifies 17 persons on the Sisseton and Wahpeton Reservation as Indian, but nearly all are of mixed blood.10 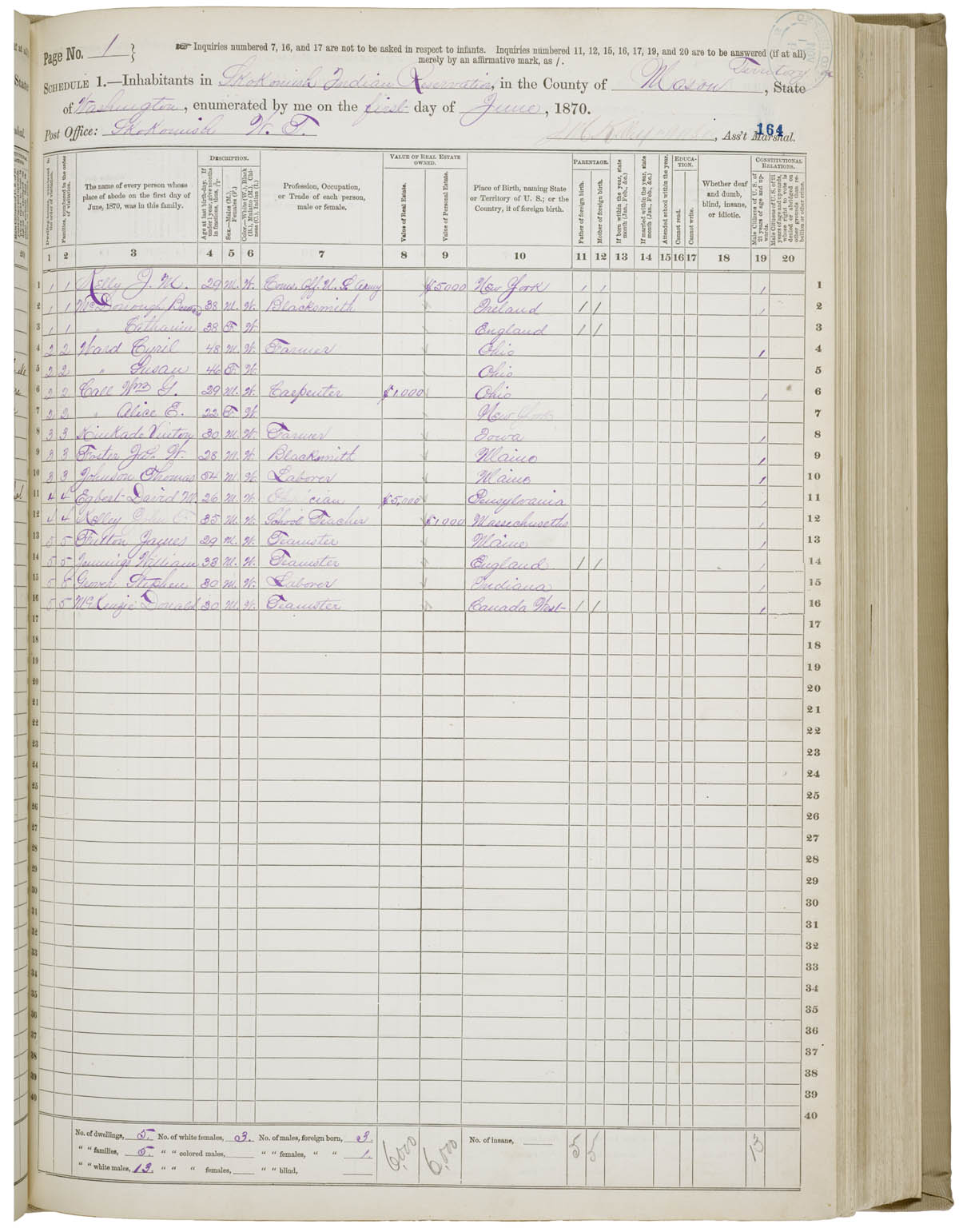 Enlarge
Although reservations are sometimes identified in the 1870 census, Indianas living on the reservation rarely are enumerated. (Records of the Bureau of the Census, RG 29)

The federal government established many reservations in the Indian Territory (present-day Oklahoma) between 1860 and 1880 and before. The 1860 census has an enumeration for the territory identified as "Indian Lands" at the end of microfilm roll 52 for the state of Arkansas, but no census exists for 1870 or 1880. Although the 1860 census of Indian Lands identifies the Choctaw, Cherokee, and Creek Nations and the Chickasaw District, no Indians are included in the enumeration because the Indians there lived on reservations and were not taxed.11

Researchers will find significant variations in the recording of names for Native Americans in the census. Sometimes there are what appear to be names in an Indian language or the probable Indian name translated into English. In many cases, only a single name, either the given or surname, is recorded. Frequently, enumerators recorded an English given name without any surname or used "Indian" as a surname or given name. In the 1880 census, for example, there are 924 enumerations in which the surname is "Indian" and 560 entries in which "Indian" is recorded as the given name with no surname.12 Occasionally, "papoose" or "squaw" is used for given names, or a number is used in place of the given name. One enumerator took the unusual step of making this note in the 1880 census: "Indians won't always give their names. When they do it is unsatisfactoryily [sic] given."13

[Illustration 3: 1880 census, caption: The recording of Native American names in the census varies significantly. Often, only a single name is recorded.]

The Superintendent of [the] Census may employ special agents or other means to make an enumeration of all Indians living within the jurisdiction of the United States, with such information as to their condition as may be obtainable, classifying them as to Indians taxed, and Indians not taxed.14

Unfortunately, a 1921 fire in the Department of Commerce building resulted in the destruction of all but a few fragments of the 1890 census returns.

A 683-page Bureau of the Census report, however, contains detailed descriptions of Indian tribes on reservations, arranged by state. Occasionally, there are specific references to individual Indians. Among the nearly 200 illustrations are portraits of Indians and an occasional map of a reservation that includes the names of the individuals living there. In the New York chapter, for example, there is a portrait of Governor Blacksnake along with information that he died at Cold Spring in South Valley, Allegany Reservation, on December 26, 1859.15 A half-dozen maps of Indian reservations in New York include the names of individuals. If you know the reservation where an individual lived in the late 1800s, check the 1890 report for possible mention of the person being sought, particularly if he or she were of some prominence.

The destruction of the 1890 census is a double blow for those interested in Native American genealogy or history because that census was the first to enumerate all classes of Indians. However, genealogists pursuing Native American ancestry will find the 1860–1880 censuses of some value. When using these censuses, researchers should keep in mind the possible variations of the name of the Native American being searched. No doubt all will agree with a statement contained in The Statistics of the Population of the United States, an 1872 report on the 1870 census:

Now the fact that the Constitution excludes from the basis of representation "Indians not taxed" affords no possible reason why, in a census which is on its face taken with equal reference to statistical as to political interests, such persons should be excluded from the population of the country. They should, of course, appear separately, so that the provisions of the Constitution in regard to the apportionment of Representatives may be carried out; but they should appear, nevertheless, as a constituent part of the population of the country viewed in the light of all social, economical, and moral principles.16

James P. Collins is a volunteer staff aide at the National Archives and Records Administration, Washington, D.C. He has worked on a variety of genealogy-related projects since 1996. The author wishes to acknowledge the assistance of archivist Constance Potter, for without her encouragement and expert advice, this article would not have been written.

1. The instructions for the 1850 census, the first in which all members of the household are listed, did not provide for the enumeration of any Indians. There is at least one instance however, in which Indians were identified: Pueblo Indians are identified as "copper" in Taos County, New Mexico (Seventh Census of the United States, 1850, National Archives Microfilm Publication M432, roll 469).

15. The Miscellaneous Documents of the House of Representatives for the 1st Session of the 52nd Congress, 1891–92, serial set volume 3016.

16. Ninth Census—Volume I, The Statistics of the Population of the United States, p. xvi.