Fala and the Barkers for Britain

Arguably history's best known presidential pet was Fala, a Scottish terrier given to Franklin Roosevelt in 1940 by his distant cousin Margaret Suckley. Fala appeared in political cartoons, news articles, movie shorts, and even FDR's campaign speeches. Secret Service agents called Fala "The Informer" because, during secret wartime presidential trips, the dog was instantly recognized while out on his walks. But this celebrity was put to good use in 1941 when Fala was named national president of Barkers for Britain.

Great Britain was besieged by Nazi Germany's aerial bombing, and U-boat attacks on shipping caused shortages of supplies. In the United States, a nationwide effort to provide nonmilitary aid to the British people was organized under the name Bundles for Britain, which collected cash contributions and donations of clothing, blankets, and other basic necessities.

Barkers for Britain was created as a way for dog lovers to support the nationwide Bundles effort, not by donating goods, but by buying memberships. Local Barkers chapters were established in towns and cities across America, and upon payment of 50 cents, a new member dog received an official Bundles for Britain tag to wear proudly on his or her collar. Fala was issued Tag #1, and as national president he was often asked to sign membership certificates with his paw print.

Barkers for Britain was so successful that nearly 30,000 tags were issued in the United States between April and October 1941, and another 1,000 were exported to Australia for Barkers chapters there. Mrs. Wales Latham, president of the national Bundles for Britain organization, wrote to Fala—"the first dog of the United States and a great leader of all loyal American canines"—and thanked him for raising "his voice in loud barks for the courageous people of Great Britain."

The galleries of the Franklin D. Roosevelt Presidential Library and Museum have a permanent exhibit on Fala, which includes Barkers for Britain items. 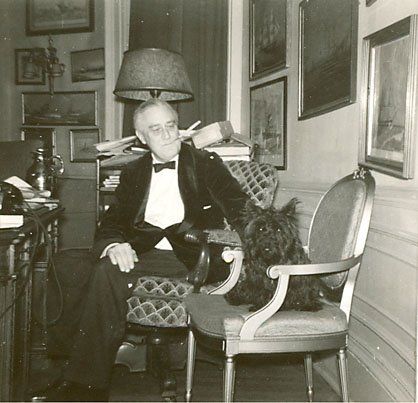 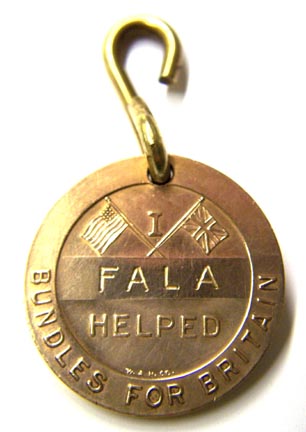 A letter to Fala from a patriotic spaniel in Austin, Texas. (Roosevelt Library) 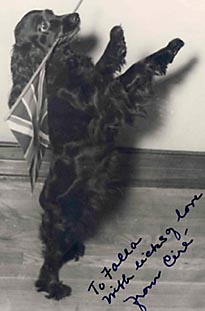 Ciré the spaniel enclosed this photo of herself in her letter to Fala. (Roosevelt Library)