Honoring a Sacred Obligation to History 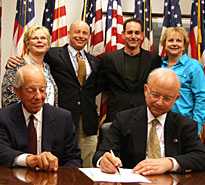 In his poignant farewell remarks to White House staff on August 9, 1974, just hours before his resignation as the nation's 37th President took effect, Richard Nixon alluded to his long career in public life, with its historic victories and humiliating defeats. "Only if you have been in the deepest valley," he said, "can you ever know how magnificent it is to be on the highest mountain."

Nixon was in both places, on multiple occasions, over the course of his extraordinary half-century in public life. And he has left a legacy that has already been well researched and will continue to be studied as more of the documents of his life and his White House tenure are opened.

Those records will now be opened under the auspices of the National Archives and Records Administration. On July 11, 2007, NARA accepted, on behalf of the federal government, the privately run library and museum built by Nixon's supporters and friends in Yorba Linda, California.

The Richard Nixon Presidential Library and Museum will be administered by NARA's nonpartisan professional archivists and other staff working for the library director I appointed, historian Timothy Naftali. The new team will work both to open formerly closed and unprocessed records and to create a nonpartisan, interactive museum that will provide a resource for all Americans interested in Nixon's life and career, the presidency as an institution, and history itself.

The transfer of control of the Yorba Linda facility ends a story that began a generation ago in 1974, when Nixon, facing impeachment proceedings in Congress, resigned amid the Watergate scandal and subsequently fought for custody of his papers and access to them, as is described elsewhere in this issue of Prologue.

The establishment of the library as a federal entity and the eventual consolidation in one institution of the records of Nixon's career is important, whether you are a Nixon admirer or a Nixon detractor, for it will provide a single setting to study the most documented presidential administration in American history.

Although the Watergate scandal brought the Nixon presidency to an end, the Nixon years were notable also for significant changes in the nation's social, political, and economic structure. Historic breakthroughs in foreign affairs—with the Chinese and the Soviets and in the Mideast—were high points of the Nixon years even as the Vietnam War continued. His records also contain a long list of domestic policy initiatives that have had enormous impact—in the areas of health, safety, the environment, and antidiscrimination—brought about by Nixon's centrist Republican administration and a heavily Democratic Congress.

This long-awaited inclusion of the Nixon Library as one of NARA's presidential libraries is also an important step for this agency. It becomes the 12th presidential library in our system, from Herbert Hoover to Bill Clinton, and in the next few years, these libraries will be joined by the George W. Bush Library.

With this historic transfer, it is appropriate to place the Nixon Library not only in historical context but in the context of the mission of the National Archives.

At NARA, we are in the business of preserving records and providing access to them without regard to the impact of their revelations. The exception here, of course, is national security records considered too vital to our defense to be made public until at least 25 years after they are created, often longer.

This "let the chips fall where they may" approach, of course, means that both positive and negative information about our former Presidents will be revealed. President Lyndon Johnson, for example, wanted visitors to his library to see the record of his presidency "with the bark off," and not everything in the archives of NARA's presidential libraries is complimentary to the men whose names are on the buildings.

President Nixon's allusion to the "deepest valley" and the "highest mountain" in his farewell speech also has relevance here. As we assume the stewardship now of all the Nixon records, it is our intention at the National Archives to preserve and make accessible to everyone the records of Richard Nixon's time in the deep valleys as well as on the highest mountain of his career.

This is in keeping with what the mission of the National Archives is all about—access. To fulfill that mission, we send a special message across time to those who fought to preserve our liberties centuries ago and to those who will, in the near and far future, look to our holdings for the history of our times.

That special message is:

We will continue to safeguard these records every moment of every day, and we will honor our sacred obligation to make them accessible to the maximum extent possible. Without exception. Without evasion. Without excision.

The responsibility to provide an accurate, complete, and full record of our history is too great for us not to live up to our mission statement. Historians will need what we preserve for them, and through them, the judgments of history, including those on Richard Nixon, will come in the fullness of time.

I want to thank the Richard Nixon Library and Birthplace Foundation for agreeing to transfer the library and museum to NARA, allowing it to become a part of our system of federal presidential libraries. We look forward to working with the foundation and all those interested in the career of Richard Nixon in the future on many programs to educate and entertain visitors in the study of history and in improving civic literacy for all American citizens.