A Year of Celebration for Our 75th Anniversary

Acting Archivist of the United States

The National Archives, the nation's record keeper, is 75 years old this year.

The Archives officially came into being on June 19, 1934, when President Franklin D. Roosevelt signed legislation creating the agency. Construction of our main building, along the National Mall in Washington, had begun in the final weeks of the Hoover administration in 1933, and by late 1935, Archives staff began moving in.

Now, three-quarters of a century later, we have evolved into a vital component of America's democracy—preserving the nation's records—past, present, and future. And we continue to broaden access to them for use by government agencies, Congress, lawyers, historians, journalists, and ordinary Americans—for tracing their family roots, learning American history, preparing legal actions, researching news or history, or documenting eligibility for government assistance.

We'd like everyone to join the NARA family—staff, volunteers, researchers, and our professional colleagues—this year as we celebrate this milestone. This invitation is not only for those of you who come to our Washington, D.C., area facilities to do research or to see our exhibits or special programs. It's also for those who use our holdings at one of our 13 regional archives or 13 presidential libraries. And we include in that invitation those of you who follow Archives activities or do research through our web site, www.archives.gov, or who keep up with our activities through Prologue.

We have a variety of programs and activities planned. 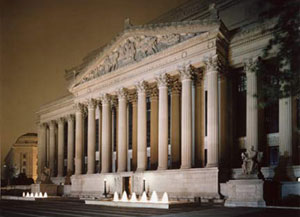 This special web page also has a new photo feature called "NARA Through the Years," which takes you on a visual trip through the Archives' first 75 years—spotlighting everyday staff activities as well as defining moments in our agency's history through the decades.

The biggest item on our celebration schedule is, appropriately, the exhibit "BIG!"—which features big records, big ideas, and big events. It is running in the O'Brien Gallery of the National Archives Building in downtown Washington through January 3, 2010.

Included in the exhibit are a 13-foot-by-13-foot map of the Gettysburg battlefield from the Civil War; the 13-foot scroll of the Articles of Confederation, the nation's first constitution; and a size 22 sneaker that belonged to basketball legend Shaquille O'Neal. And much more.

Also available will be prints of a commemorative anniversary paintingdepicting the National Archives in the 1930s, when it was still a young agency. It has been done by Carol Dyer, a nationally known artist who specializes in an American folk art style.

To further mark this milestone year in our history, we have also established awards in two areas that are top priorities at the National Archives: genealogy and civic literacy.

An "Excellence in Genealogy Research Award" is being presented at our annual Genealogy Fair in April. This annual competition is open to undergraduate and graduate students at an accredited institution of higher education who have completed at least one semester but have not advanced to the doctoral program level. There will be first and second prizes. For more information go to www.archives.gov/press/press-releases/2009/nr09-18.html.

We are also sponsoring two awards in connection with National History Day (NHD). The essays are to be at the junior and senior high school levels and should be in any category that uses the records of the federal government to either illuminate the creation and ratification of the U.S. Constitution or to focus on constitutional issues throughout American history. The winners will be announced during the annual NHD contest at the University of Maryland in June. More details are available on the National History Day website.

There will be some special events outside of Washington, too.

In Kansas City, our Central Plains regional archives is moving to a location in the heart of Kansas City's business, cultural, and tourist areas. And it will open with an exhibit called "It's Big," which will feature large items from the holdings of the Central Plains region. Both the dedication of the new building and the exhibit opening will be on May 23 and are open to the public. For more information, go to www.archives.gov/central-plains/.

On June 13, a special exhibit will open at our Southeast regional archives in suburban Atlanta. "Documented Rights," featuring historical documents from our regional archives around the country, will run though February 23, 2010, at the Southeast regional archives facility, then travel to various other locations around the country. On that day also, there will be a symposium on the legacy of the civil rights movement and its various aspects; for more information, go to. Also, during June and the rest of the year, there will be a series of free public events in the McGowan Theater at the National Archives Building about archival treasures in the National Archives as well as noontime lectures and films.

Our mission at the National Archives is to preserve and make accessible the records that guarantee our rights and entitlements, hold our government officials accountable, and accurately chronicle our national experience.

Please join in celebrating this role in our 75th year of helping to maintain a vibrant democracy.