NARA Is Up to Date in Kansas City

Plan for the National Archives at Kansas City.

The National Archives’ Central Plains regional archives is moving into the heart of Kansas City’s cultural and historic area.

Long situated in a warehouse­-style facility far from the major business district of Kansas City, the Central Plains archives is relocating to the Kansas City Crossroads District, near the city’s historic Union Station and its popular Crown Center. There, it can become a major part of the cultural life of the city as an easily accessible research center and venue for National Archives exhibits.

"The pride, anticipation, and excitement is overwhelming as we move to the specifically renovated historic building within the cultural district of Kansas City, rich in local, regional, and national history," says Diana Duff, regional archives director. "It’s a perfect fit!"

The Central Plains Region will celebrate its reopening on Memorial Day weekend, 2009, with keynote speakers, a history fair, an exhibit celebrating the National Archives’ 75th anniversary, and guided tours. The events are free and open to the public.

(The National Archives Central Plains region is also home to the regional Federal Records Center, which has temporary, physical custody of records that legally belong to the originating federal agency. These records are stored in underground caves in Lee’s Summit, Missouri, and Lenexa, Kansas.)

The regional archives serve as depositories and research centers for records created or maintained by federal agencies and courts and now in the legal custody of NARA. The holdings document actions, activities, and events of national, state, and local importance. The archives serves educators, genealogists, historians, journalists, lawyers, students, and others who are researching historical information.

Opened in 1969, the Central Plains regional archives has grown from its first transfer of 168 cubic feet of court records into more than 50,000 cubic feet of archival holdings, including photographs, maps, film, artifacts, and documents dating from the mid­1800s to the recent past.

Now those materials will be easier for the public to access.

A Building Fit for an Archives

The Central Plains’ new home is a former railroad freight building that has been converted into an archives. The Adams Express Building is a part of Kansas City’s Union Station complex, an area that served as a major point of convergence for railroads during the halcyon days of rail travel, including the Kansas City Southern, the Atchison­-Topeka­-Santa Fe, Union Pacific, and Burlington Northern. The Kansas City Southern Railroad still operates and uses the railyard.

The Adams Express Building is one of several freight storage structures established as a part of the original Union Station complex built in 1913–1914 in the Beaux­-Arts style by Jarvis Hunt, a Chicago architect.

Hunt, a well­-known proponent of the City Beautiful movement during the early 20th century, designed numerous railway stations across the United States including those in Dallas, Texas; Oakland, California; and Joliet, Illinois, as well as Kansas City.

The entire Union Station complex is listed on the National Register of Historic Places. Former nearby tenants include the building’s namesake along with Wells Fargo and American Express.

Through the use of federal historic tax credits and adaptive reuse technology, the building has been converted into an archival facility by the General Services Administration, which is leasing it to the National Archives. Nearby is Kansas City’s noted shopping and entertainment area, the Crown Center.

Kansas City architects Peckham Guyton Albers and Viets worked to design a building that retained the basic architectural features of the original concrete structure and created interior space that met the National Archives’ exacting requirements. An additional structure has been added to the north to provide a temperature­ and humidity­-controlled archival stack area that complies with strict National Archives environmental standards for records preservation.

The new facility features two expanded public research room areas. The textual research room serves those working with original documents. Our nontextual research room, staffed by volunteers, serves those working with online material. For example, federal population censuses for all states, 1790–1930, are available for viewing as well as immigrant arrival records, the Dawes Rolls, and Freedman’s Bureau records. Internet access for those who want to use Archives.gov, Ancestry.com, Footnote.com, and similar web resources will be an additional component to the research room offerings. 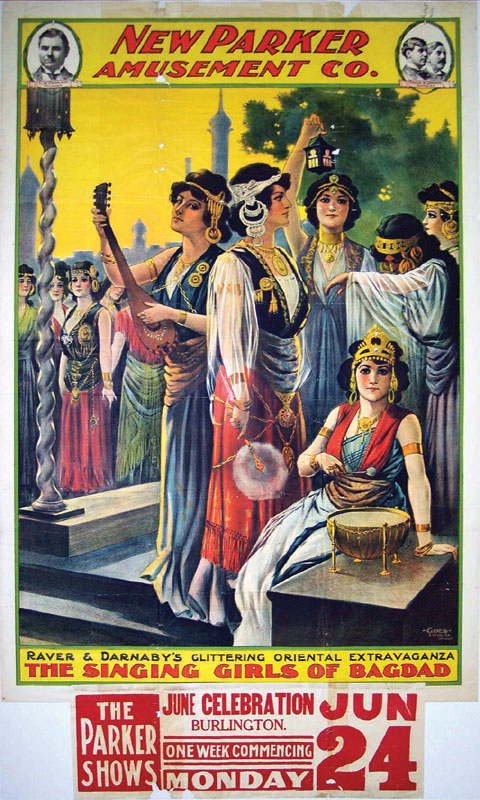 Enlarge
Charles Wallace Parker s carousel factory in Abilene, Kansas, became one of the leading U.S. companies in the carnival business. Large posters like this were used to promote the traveling shows, and are on display at the new Kansas City archives.

The Central Plains holdings range from the original landmark civil rights filing of Brown v. Board of Education of Topeka to the more whimsical Wild West and circus show posters featuring "the singing girls of Bagdad" and the more mundane, such as bankruptcy cases from the 20th century.

Exhibits Will Show a Public Face

By watching Democracy Starts Here, an 11–minute film produced by the Discovery Channel, the public will learn through personal stories how the records of the National Archives make a difference in the lives of real people. At the "Name Dropping" area, visitors will have the opportunity to take home a souvenir copy of a signature found in the Central Plains holdings.

Last, the area includes a video display, highlighting upcoming events and activities, and a "NARA Across America" display showcasing all of the regional facilities.

Premiere Exhibit Will Be "Big"

Unique to this location are two exhibit galleries, a new program activity for the Kansas City office that will allow the region to put forward a public face.

When the facility opens in May 2009, "It’s Big" will premiere in the Concourse Gallery. "It’s Big" is an exhibit developed in conjunction with NARA’s 75th anniversary that will feature big documents, big ideas, big personalities, and big events originating in the Central Plains Region. The documents, maps, and photographs from the archives tell stories of human and historical interest.

Following "It’s Big," the Midwest premier of "Deadly Medicine," created by the National Holocaust Museum, will be on display in partnership with the Midwest Center for Holocaust Education from March 15, 2010, through June 10, 2010. This thought­provoking exhibit focuses on the Nazi medical experiments that occurred prior to and during World War II.

In the summer of 2010, the Concourse Gallery will present " Documented Rights," an exhibit created in the Southeast Region that reveals some of the National Archives documents that give voice to our national struggle for personal rights and freedoms.

In addition, a smaller Regional History Gallery will be a part of an expanded exhibits area and will house temporary exhibits of regional interest through a collaborative partnership with historical societies, libraries, and archives.

"We have invited state archives, historical societies, and other heritage institutions within our region to display their documents and artifacts and tell their stories here in Kansas City," says Regional Administrator R. Reed Whitaker. "We’d like the National Archives to be a center for regional history research and discovery."

As a part of the grand reopening festivities, the Regional History Gallery will feature the Kansas­-Nebraska Act of 1854 with the original act on loan from the National Archives headquarters in Washington, D.C. The exhibit will focus on the act’s impact on the region, its role in the "Bleeding Kansas" conflict, and how it affected national sentiment on the slavery question.

The Central Plains Region has a long history of offering educational outreach programs. The new facility will allow this program to further expand and reach ever larger audiences.

In July 2009, the region will host "Primarily Teaching," a National Archives program for educators. This week-long workshop guides teachers on how to use primary sources in their everyday classroom teaching. Additionally, the new facility has a distance learning area that will support interactive broadcasts to students, educators, and genealogists throughout the region to demonstrate "hands­-on" history using documents and photographs from the National Archives.

"For the first time we will have a large classroom space for conducting workshops and programs for teachers, school librarians, as well as students," says Education Specialist Lori Cox­-Paul. "We will also be upgrading our interactive distance-­learning equipment and plan to be able to extend our educational reach more effectively to all of the states that we serve."

In addition to the expanded exhibits and educational program offerings, The Kansas City Star, owner of Star Books—a regional book publisher—will operate and maintain the gift shop in the new facility. The shop will have 500 square feet of space dedicated to books and publication about the National Archives, Kansas City, and the region. It will also stock souvenir items for visitors who will want a special memento of their visit.

One of the volumes published by Star Books is Great Plains Originals: Documents from America’s Heartland, published in late 2006, featuring more than 200 documents from the National Archives Central Plains regional archives. This spring Star Books will publish a second book, Your Land, Our Land: Two Centuries of American Words and Images from the Regions of the National Archives. The publication will include images and holdings from all the regional archives facilities across the nation.

The Central Plains regional archives’ move to downtown Kansas City, and the expansion of its array of public programs, is another step in the National Archives' efforts to lift the level of civic literacy in this country and encourage citizens of all ages to examine the records that are the cornerstone of our democracy. These are the records that guarantee Americans' rights and entitlements, hold their government accountable, and chronicle the story of the national experience.

Kimberlee N. Ried is the archives and outreach specialist at NARA–Central Plains Region (Kansas City) and has been with the agency since 2003. She holds a bachelor’s degree in American history, with emphasis in cultural anthropology and sociology, and a master’s degree in library science from Emporia State University. She is currently completing postgraduate work at the University of Missouri­Kansas City.

Plan for the National Archives at Kansas City.