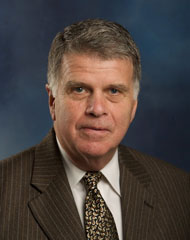 One of our biggest challenges this past summer has been the preparation of our fiscal year 2012 budget request for submission to the Office of Management and Budget (OMB).

The National Archives and Records Administration—like all non-defense, non-security discretionary–funded federal departments and agencies—has been asked to make significant reductions to its FY 2012 budget request.

Here is the situation:

Our appropriation for the fiscal year ending September 30, 2010, was $469.87 million. The President's request for us for FY 2011, the fiscal year beginning October 1, is $460.29 million, a 2-percent decrease. So far, action in Congress on FY 2011 requests has not been encouraging, not just for NARA, but across government.

Now we've been instructed by OMB to cut an additional $41.7 million in FY 2012 from the FY 2011 request—a 9.1-percent decrease. Also, we have been asked to identify five significant program terminations, reductions, and administrative savings to reduce agency costs.

In addition, we must submit an alternate plan that identifies an additional $23.5 million in cuts, bringing the potential reduction to $65.2 million, or 14.2 percent from the FY 2011 requested level.

Identifying reductions in our budget that total $41.7 million, let alone $65.2 million, will not be easy. We must weigh the cost savings of reducing or eliminating a program or activity against the benefits of each program and activity as they relate to our core missions.

Details of these cuts will be embargoed until the President sends his FY 2012 budget request to Congress in February 2011.

We hope OMB recognizes that such heavy budget cuts would be very detrimental to a small agency that is not program-heavy, but service-oriented. Nonetheless, we must comply with the guidance and propose some serious reductions in agency activities.

For starters, I have directed all senior managers to look for ways to reduce spending in their respective areas. And President Obama's Open Government Initiative, which calls for more transparency, participation, and collaboration in government, as well as my own inclination in this situation, made it important to also involve our staff.

After all, the staff knows the agency at all operational levels at our 45 locations from Atlanta to Anchorage and Boston to California. And they will have to continue to perform our core missions under much tighter fiscal constraints.

And so we asked them for their suggestions.

We used a software application called IdeaScale to enable staff to submit ideas for budget cuts and for other staff to comment on and vote for or against those ideas. At the end of this "budget brainstorming" exercise, we had 371 ideas and 921 comments on them from 794 users.

All the suggestions are being evaluated as we work on our budget submission to OMB later this year.

Although we don't yet know which programs and activities at NARA will be reduced or eliminated, we do know that Congress is not waiting until it gets the President's FY 2012 budget request to make cuts; they are already under way.

For example, the Senate Appropriations Committee, in its version of our spending bill, has already cut $13.5 million from the $85.5 million the President requested for the Electronic Records Archives for FY 2011.

Many of the appropriations subcommittees in both the House and Senate have less money to spread around among the agencies they fund, and thus they are not able to provide the level of funding the President has requested.

The Obama administration's concerns and the equally strong concerns in Congress over the nation's budget deficits at the federal level are similar to what has already occurred at the state and local government levels, where drastic cuts have been made in many programs and services.

What we at NARA must do, however, is continue with our core mission:

To preserve and make accessible the important records of our government that document the rights and entitlements of our citizens, hold our government officials accountable, and provide a complete record of our nation's history.