A New Exhibit from the National Archives 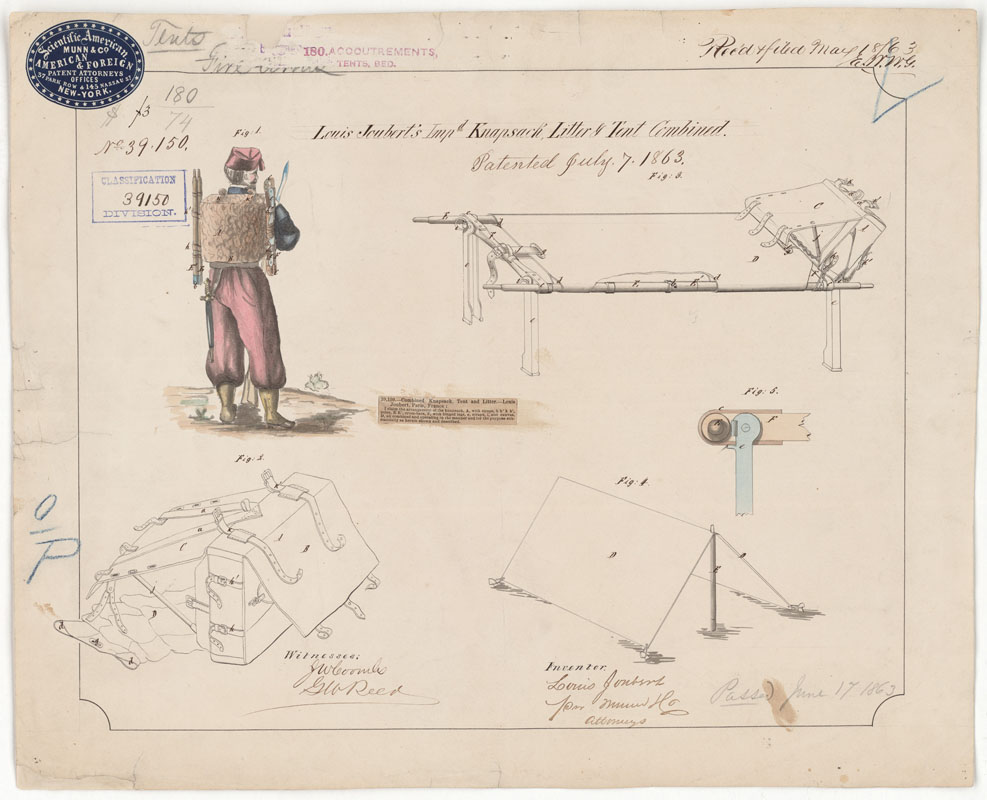 Enlarge
In 1862 Louis Joubert patented this multipurpose device that could serve as a tent, knapsack, or litter. (Records of the Patent and Trademark Office, RG 241)

It ended almost 150 years ago, but Americans still discuss, debate, and disagree about the Civil War. No one alive today lived during this momentous conflict. Time and myth have filtered our views of the war.

So how do we know what happened?

Very often, we find answers and stories in records left by the participants themselves. Much of this evidence—letters, orders, maps, telegrams, photographs, and broadsides—is preserved in the National Archives.

"Discovering the Civil War," a new exhibit that will open April 30 at the National Archives in Washington, D.C., takes a fresh look at the conflict through little-known stories, seldom-seen documents, and unusual perspectives. The exhibit invites visitors to consider and ask questions about the evidence found in the records, listen to a wide variety of voices from the Civil War era, and make up their own minds about the struggle that tore apart these United States. 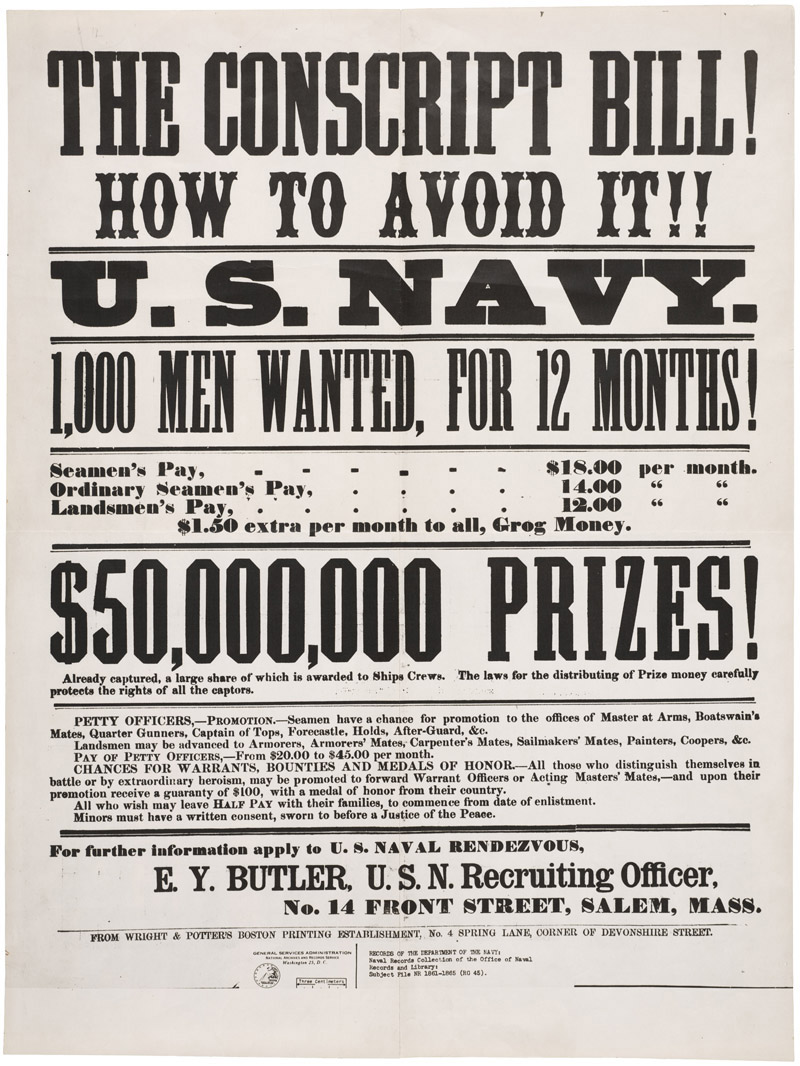 Enlarge
The U.S. Navy used the threat of the draft and the possibility of prize money to encourage men to enlist. (Naval Records Collection of the Office of Naval Records and Library, RG 45)

The exhibit's title, "Discovering the Civil War," reflects a belief that Civil War stories are constantly being uncovered and reexamined and that, more often than not, the records in the National Archives are at the center of these new questions and answers.

The new exhibit will feature original and facsimile Civil War documents in what will be the most extensive display ever assembled from the National Archives' incomparable Civil War holdings, and it will invite people of all ages to explore records usually seen only by historians. Displayed alongside famous milestone documents such as Robert E. Lee's resignation from the U.S. Army and telegrams between President Lincoln and his generals will be hundreds of less well-known ones, such as the unratified 1861 version of the 13th amendment, a message from a Southern governor rejecting Lincoln's call for troops to put down the rebellion, and the Constitution of the Confederacy.

"Discovering the Civil War" is also about re-discovering a familiar subject. It attempts—in the words of historian Edward L. Ayres—to "make the Civil War strange again" for both the buff and novice. Included in the exhibit will be unique discovery documents such as a hand-altered federal court record in which a "foreign born" citizen from New York petitions for Confederate citizenship. 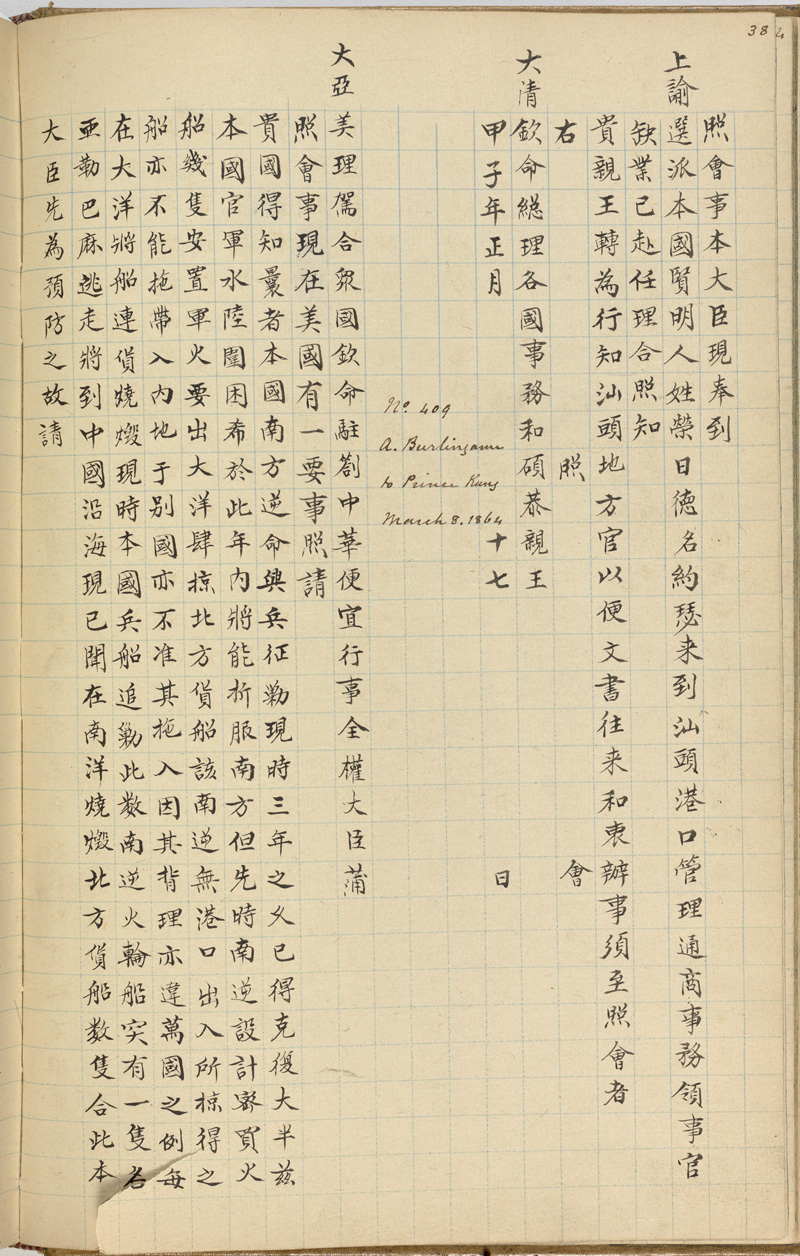 Across the top of the page, the word "United" is crossed out and "Confederate States of America is written in. Also included will be patent drawings for a variety of devices ranging from tents to weapons to artificial limbs. A Chinese-language message from Prince Kung stating that Confederate ships will not be allowed to enter Chinese ports will make the point that the Civil War was in a real sense, a global war.

Finally, exciting interactive experiences will attempt to bring the Civil War into the 21st century. Visitors will use a social media–like device that will demonstrate the strong pre-war relationships among Northern and Southern military leaders. A "word cloud"—a visual depiction of a document's content—will be the entry into an exploration of an intriguing list of men who served as substitutes for others drafted into the Union Army. Visitors will also be able to follow the story of Confederate raider Alabama and its sinking by the USS Kearsarge while they create a graphic novel depicting this story. The discovery continues beyond the walls of the exhibit with a downloadable web-based app to use a secret code from the Civil War.

In Washington, D.C., "Discovering the Civil War" will be shown in two parts. Part one: "Beginnings," will run from April 30, 2010, through September 6, 2010, in the Lawrence F. O'Brien Gallery in the National Archives Building. Part two: "Consequences," will open in the O'Brien Gallery on November 10, 2010. After its Washington venue closes on April 17, 2011, the two parts of "Discovering the Civil War" will be combined and travel to up to eight additional venues around the country beginning in June 2011.