Exploring the Life and History of the "Buffalo Soldiers"

They have lined his walls in his office and home. They have been presented to him as gifts and memorials to his service to the nation. For General Colin Powell, the art work and memorabilia of the historic "Buffalo Soldiers" have profound meaning.

The career of General Powell represents a historical and spiritual link to the United States Colored Troops, (USCT) organized May 22, 1863, and the 9th and 10th Cavalry and the four all-Black infantry regiments organized in 1866. Military service and the giving of one's life for one's country are the ultimate sacrifice. But why did African Americans invest their lives in a country that denied them every opportunity? It is a question that scholars of Afro-American history and Black military history are just beginning to explore.

After the USCT established a Black military presence as volunteer units during the Civil War, the 9th and 10th Cavalry regiments began the historic tradition of a Black military presence in the peacetime regular army. The Congress sought to reorganize and restructure the army after the Civil War, and passed the Army Organization Act on July 28, 1866.

Under the act, Congress authorized four additional cavalry regiments, creating two "to be composed of colored men." From this time to the closing days of World War II, a distinct and unique history of the 9th and 10th Cavalry regiments unfolded within the military.

They participated in the Indian campaigns in the West, fought with Teddy Roosevelt and the Rough Riders in the Spanish American War, enforced the neutrality laws along the Mexican border, saw four tours of duty in the Philippine Islands, and battled Pancho Villa during the Mexican punitive expedition under John J. Pershing in 1916. When the United States entered World War I, many of the non-commissioned officers received commissions and several hundred troopers joined new units preparing to fight in Europe.

In peacetime America, 1920 to 1941, they became efficient horse and marksmanship units, winning many competitions while fulfilling their duties as service troops for the cavalry school at Fort Riley, Kansas.

When the United States entered World War II, the 9th and 10th Cavalry, along with others, became subject to changing military philosophy and the mechanization of the cavalry. These wartime changes, for all practical purposes, meant the end of the mounted cavalry in postwar America. 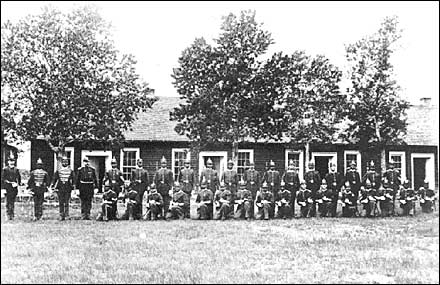 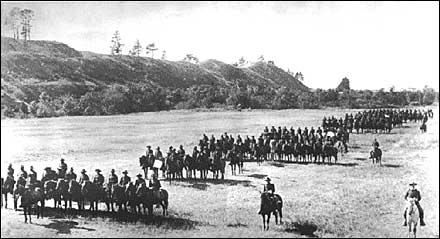 The records in the National Archives relating to the 9th and 10th Cavalry regiments span some eighty years (1866-1946). Whether seeking information on an individual soldier or a military unit, a researcher must understand that information can be gathered from a variety of NARA record groups, and consist of non-textual as well as textual records. The quality and nature of information varies with the records.

The recruitment of men for the 9th and 10th Cavalry immediately following the Civil War coincided with the mustering out of thousands of USCT troops. Record Group 94, Records of the Adjutant General's Office, is fundamental for military history research because the Adjutant General handled the record- keeping of the Army. Recruitment and enlistment files, muster rolls and returns of military divisions, departments, and posts, and correspondence and orders were routinely sent to this office. These records exist as the major source for personnel information on the 9th and 10th Cavalry regiments prior to 1917.

The men of the 9th and 10th Cavalry came from various social and economic backgrounds. Many were veterans of the Civil War. The ranks of the new cavalry units were filled with ex-slaves but they now had a new perspective–freedom. For a composite of who these men were, their former lives, their military experiences, and what happened to them, the enlistment papers in the Adjutant General's records are especially important. In many cases, detailed sketches and outlines of the men's lives can be gleaned from these records.

The organization of the 9th Cavalry took place in New Orleans, Louisiana, under the auspices of the Division of the Gulf (covering Florida, Louisiana, and Texas, August 1866). The unit was immediately sent to San Antonio, Texas, for station duty.

On August 6, 1866, General William T. Sherman, Commander, Military Division of the Mississippi, issued from his headquarters in St. Louis General Order No. 6, which established the first command structure for the 10th. The unit was based initially at Fort Leavenworth, Kansas. As issues and events in the West unfolded, the command structure for both units changed and moved.

The Indian campaigns of the West provided the signature recognition for the 9th and 10th Cavalry. Shortly after both units were transferred to the West, they, along with other cavalry units, engaged Native Americans in battle. The 9th patrolled the Rio Grande River and the Mexican border, escorting and protecting government mail and settlers, and containing Indians, Mexicans, and lawless Americans.

Between 1867 and 1886, the 10th was engaged in extended campaigns against the Cheyennes, Kiowas, Comanches, and Apaches in Kansas, New Mexico, Arizona, and the Indian Territory. According to Benjamin H. Grierson, Colonel, 10th Cavalry, 1867 to 1890, the 10th acquired the name "Buffalo Soldiers" during the 1871 campaign against the Comanches in the Indian Territory. Grierson said that the Comanches respected the soldiers' tireless marching and dogged trail skills. They had earned the name of the rugged and revered buffalo. The 10th made the "Buffalo" its regimental coat of arms years later, but the term "Buffalo Soldiers," became synonymous with both the 9th and 10th units.

The image of Teddy Roosevelt and the Rough Riders charging up San Juan Hill is ingrained in the minds of most Americans. Those men of the 9th and 10th Cavalry alongside Roosevelt are not so prominent. They not only were with him, but they played an important role in the battle. There are official and unofficial reports of the battle in Record Group 391, US Regular Army Mobile Units, 1821-1942. Among the Letters and Endorsements Sent, 1896-99, is a handwritten account of the 9th Cavalry in battle. The 10th Cavalry's Regimental History, 1866-98, also covers the participation of that unit in the battle and other engagements during the war. The Medal of Honor winners from the 10th Cavalry are cited, and there are fading newspaper clippings describing the San Juan Hill action and the heroism of the "Buffalo Soldiers."

Record Group 395, US Army Overseas Operations and Commands, 1898-1942, along with Record Group 391 and records in the various record groups of the Adjutant General's Office, can be used to follow the 9th and 10th in their tours of duty in the Philippine Islands, 1900-09, and the punitive expedition in Mexico, 1915.

Two record groups that should also be consulted are Record Group 153, Records of the Judge Advocate General (Army), and Record Group 159, Records of the Office of the Inspector General (Army). Court Martials were a necessary regulating tool for military behavior. While most soldiers who served did so honorably, others did not, and extenuating circumstances often placed soldiers in a military court of law. Among the Regimental Orders and Circulars Issued, Oct. 1875-Dec. 1891 in Record Group 391, are documents on court martial proceedings and military tribunal appointments. The actual court case files are in the Judge Advocate General records. Court cases typically provide details about people and events not usually found elsewhere.

The history of the 9th and 10th Cavalry regiments is not only a part of the great military tradition of the United States but of the history of Black accomplishment. It is a distinct and unique history.

Walter Hill is an archivist with the National Archives and Records Administration. He would like to acknowledge the assistance of Peggy Cifrino, General Powell's staff, NARA staffers Michael Musick, Elaine Everly, Tod Butler, the late Sara D. Jackson, "my spiritual mentor in Black military history," and various "Buffalo Associations" around the country with whom he has worked.