Based on his latest book, America in the World: A History of U.S. Diplomacy and Foreign Policy, Former President of the World Bank Robert Zoellick will discuss the history of America’s diplomacy tactics with The Washington Post’s David Von Drehle.

Zoellick was President of the World Bank Group from 2007 to 2012, U.S. Trade Representative from 2001 to 2005, and Deputy Secretary of State from 2005 to 2006. He is currently a Senior Fellow at Harvard Kennedy School’s Belfer Center for Science and International Affairs and a member of the Truman Library Institute’s 75th Anniversary Honorary Committee.

This 75th-anniversary program is generously sponsored by Speaks Chapel. 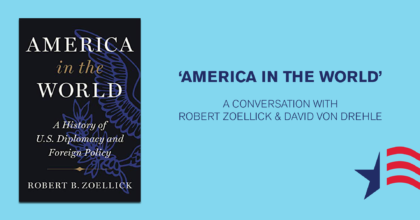