On April 12, 1945, Harry S. Truman dramatically ascended to the presidency, after meeting with President Roosevelt only twice and having received no briefing on the atomic bomb. The first four months of Truman’s presidency became some of the most climactic and significant of our nation’s history.

Wallace will share stories from the key individuals involved in the development of the bomb, including Albert Einstein, Robert Oppenheimer, and most importantly, the untested new president who faced a decision that would change the world forever. Based on significant research conducted at the Truman Library, Countdown 1945 is a #1 national bestseller reflecting on these world-changing events 75 years later. 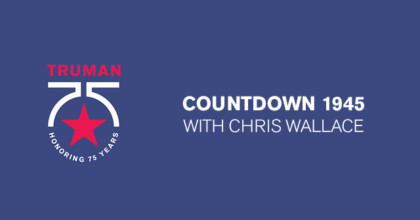