The night before its release, New York Times bestselling author Joe Scarborough will discuss his newest book Saving Freedom: Truman, the Cold War, and the Fight for Western Civilization with the Truman Library Institute community and moderator, former Missouri Senator Claire McCaskill. In Saving Freedom, Scarborough explores a turning point when patriotic Americans of both political parties worked together to defeat tyranny. Led by the untested President Truman, these efforts were a radical shift from 150 years of isolationism that proved to be the pivotal moment that guaranteed Western Europe’s freedom, the American Century’s rise, and the eventual collapse of the Soviet Union.

Joe Scarborough is a Washington Post columnist, co-host of MSNBC’s popular morning program, Morning Joe, and a former United States congressman. He has been named to the “Time 100” list of the world’s most influential people.

Registration for this virtual book launch starts at $29 and includes a signed copy of Saving Freedom. The book will be available after it is released on November 24, 2020. 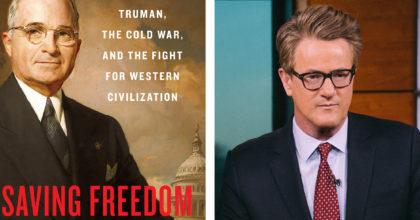