Following the surrender of Fort Sumter to the Confederacy, Abraham Lincoln and his military advisors began to consider a variety of plans to bring the South back into the Union. In less than a week, the Union began its blockade of the southern states in an effort to prevent the trade of goods, supplies, and weapons between the Confederacy and other nations.

Prize law is that part of international law which concerns the capture of enemy property by a belligerent at sea during war. The National Archives at New York City maintains prize cases of ships seized during the blockade from an array of ships. These records are organized by ship name and included with these records are materials confiscated from the seized vessels. Also in these materials, is a copy of two Presidential proclamations from Abraham Lincoln concerning the blockade. These proclamations, like Lincoln's more famous Emancipation Proclamation and Proclamation suspending the Writ of Habeas Corpus, had the force of law despite the fact they didn't follow the legislative process. The constitutionality of these acts of Presidential power continues to be debated to this day. 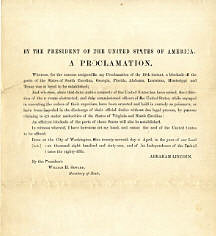