Order of Argument in the Case, Brown v. Board of Education

A reargument was necessary because the Court desired briefs from both sides that would answer five questions, all having to do with the attorneys' opinions on whether or not Congress had segregation in public schools in mind when the 14th amendment was ratified. The document lists the names of each case, the states from which they came, the order in which the Court heard them, the names of the attorneys for the appellants and appellees, the total time allotted for arguments, and the dates over which the arguments took place.

The first case listed, Briggs v. Elliott, originated in Clarendon County, South Carolina, in the fall of 1950. Harry Briggs was one of twenty plaintiffs who were charging that R.W. Elliott, as president of the Clarendon County School Board, violated their right to equal protection under the fourteenth amendment by upholding the county's segregated education law. Briggs featured social science testimony on behalf of the plaintiffs from some of the nation's leading child psychologists, such as Dr. Kenneth Clark, whose famous doll study concluded that segregation negatively affected the self-esteem and psyche of African-American children. Such testimony was groundbreaking because on only one other occasion in U.S. history had a plaintiff attempted to present such evidence before the Court.

Thurgood Marshall, the noted NAACP attorney and future Supreme Court Justice, argued the Briggs case at the District and Federal Court levels. After the U.S. District Court's three-judge panel ruled against the plaintiffs, the case was appealed to the Supreme Court. Marshall also argued the Davis v. County School Board of Prince Edward County, Virginia, case at the federal level. Originally filed in May of 1951 by plaintiff's attorneys Spottswood Robinson and Oliver Hill, the Davis case, like the others, argued that Virginia's segregated schools were unconstitutional because they violated the equal protection clause of the fourteenth amendment. And like the Briggs case, Virginia's three-judge panel ruled against the 117 students who were identified as plaintiffs in the case.

Listed third in the order of arguments, Brown v. Board of Education of Topeka was initially filed in February of 1951 by three Topeka area lawyers, assisted by the NAACP's Robert Carter and Jack Greenberg. As in the Briggs case, this case featured social science testimony on behalf of the plaintiffs that segregation had a harmful effect on the psychology of African-American children. While that testimony did not prevent the Topeka judges from ruling against the plaintiffs, the evidence from this case eventually found its way into the wording of the Warren court's May 17, 1954 opinion. The Court concluded that:

"To separate them [children in grade and high schools] from others of similar age and qualifications solely because of their race generates a feeling of inferiority as to their status in the community that may affect their hearts and minds in a way unlikely to ever be undone." 1

Because Washington, D.C., is a federal territory governed by Congress and not a state, the Bolling v. Sharpe case was argued as a fifth amendment violation of "due process." The fourteenth amendment only mentions states, so this case could not be argued as a violation of "equal protection," as were the other cases. When a District of Columbia parent, Gardner Bishop, unsuccessfully attempted to get eleven African-American students admitted into a newly constructed white junior high school, he and the Consolidated Parents Group filed suit against C. Melvin Sharpe, president of the Board of Education of the District of Columbia. Charles Hamilton Houston, the NAACP's special counsel, former dean of the Howard University School of Law, and mentor to Thurgood Marshall, took up the Bolling case.

With Houston's health already failing in 1950 when he filed suit, James Nabrit, Jr. replaced Houston as the original attorney. By the time the case reached the Supreme Court on appeal, George E.C. Hayes had been added as an attorney for the petitioners, beside James Nabrit, Jr. According to the Court, due to the decision in Plessy, "the plaintiffs and others similarly situated" had been "deprived of the equal protection of the laws guaranteed by the Fourteenth Amendment," therefore, segregation of America's public schools was unconstitutional. 2

The last case listed in the order of arguments, Belton v. Gebhart, was actually two nearly identical cases (the other being Bulah v. Gebhart), both originating in the state of Delaware in 1952. Ethel Belton was one of the parents listed as plaintiffs in the case brought in Claymont, while Sarah Bulah brought suit in the town of Hockessin, Delaware. While both of these plaintiffs brought suit because their African-American children had to attend inferior schools, Sarah Bulah's situation was unique in that she was a white woman with an adopted Black child, who was still subject to the segregation laws of the state. Local attorney Louis Redding, Delaware's only African-American attorney at the time, originally argued both cases in Delaware's Court of Chancery. NAACP attorney Jack Greenberg assisted Redding. Belton/Bulah v. Gebhart was argued at the federal level by Delaware's attorney general, H. Albert Young.

Reargument of the Brown v. Board of Education cases at the federal level took place over December 7, 8, and 9, 1953. While the featured document notes that Briggs v. Elliott was the first case argued, it does not reveal that throngs of spectators were already in line outside the Supreme Court by sunrise on the morning of December 7, although arguments did not actually commence until one o'clock that afternoon. Spottswood Robinson began the argument for the appellants, and Thurgood Marshall followed him. Virginia's Assistant Attorney General, T. Justin Moore, followed Marshall, and then the court recessed for the evening.

On the morning of December 8, Moore resumed his argument, followed by his colleague, J. Lindsay Almond, Virginia's Attorney General. According to some legal scholars, Marshall was so moved by Davis's forcefully condescending argument against the appellants, that Marshall concluded his rebuttal by stating that "the only way that this court can decide this case in opposition to our position.is to find that for some reason, Negroes are inferior to all other human beings."3 The document also notes that the United States Attorney General, J. Lee Rankin, presented the U.S. government's amicus curiae brief on behalf of the appellants, which showed its support for desegregation in public education. In the afternoon Robert Carter began arguments in the Kansas case, and Paul Wilson, Attorney General for the state of Kansas, followed him in rebuttal.

On December 9, after James Nabrit and Milton Korman debated Bolling, and Louis Redding, Jack Greenberg, and Delaware's Attorney General, H. Albert Young argued Gebhart, the Court recessed at 2:40 p.m. 4 The attorneys, the plaintiffs, the defendants, and the nation waited five months and eight days to receive the unanimous opinion of Chief Just Earl Warren's court, which declared, "in the field of public education, the doctrine of 'separate but equal' has no place." 5 The Brown decision was a watershed in American legal and civil rights history because it overturned the "separate but equal" doctrine first articulated in the Plessy v. Ferguson decision of 1896. 6 By overturning Plessy, the Court ended America's 58-year-long practice of legal racial segregation and paved the way for the integration of America's public school systems.

Note: The featured document comes from Record Group 267, Records of the Supreme Court, National Archives and Records Administration, and is available (as are documents from all five cases) on microfilm number M1954. General information about the microfilm holdings of the National Archives can be found online. 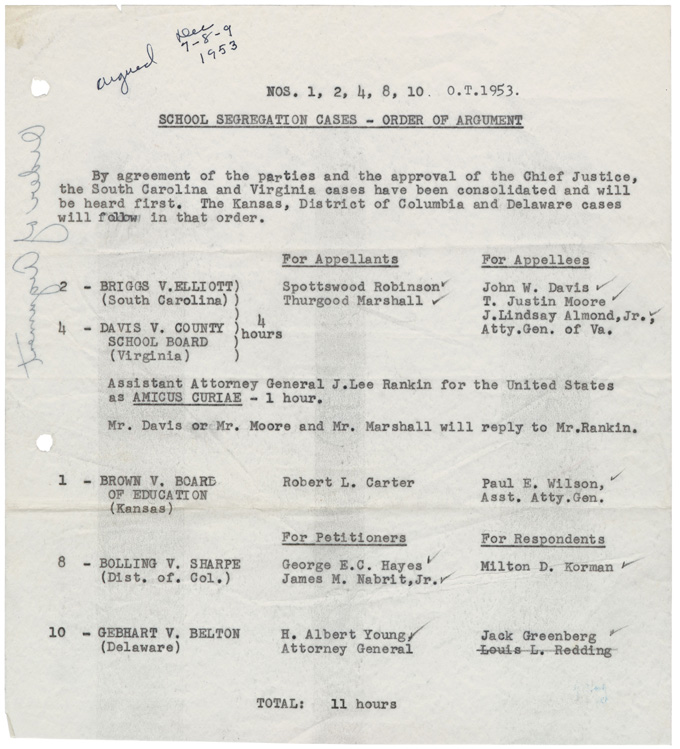 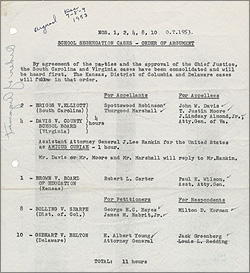