Test Population Schedule for the 1930 Census

In the spring of 1930, the Bureau of the Census temporarily employed nearly 87,800 individuals as enumerators for the Fifteenth Census of the United States. Each was at least 18 years old and a U.S. citizen, and had successfully filled out a test census schedule. The test included a narrative description of families and farms in a hypothetical community and a blank schedule. Potential enumerators read the narrative and completed the schedule based on its contents. Interestingly, the blank schedule that was part of the test was not the final 1930 census schedule. Thus, the purpose of the test was not to familiarize applicants with the 1930 census questions, but rather to assess their ability to follow directions and to make sense of people's answers, so as to record the data correctly. The document featured in this article is an example of a completed test population schedule.

The Bureau of the Census mailed 336,890 test schedules to prospective enumerators and received 197,950 completed tests. After they were corrected and graded by the Bureau in Washington, DC, supervisors across the country were provided with lists of applicants in their district who had successfully passed the test. From these lists, the supervisors, who were responsible for the completeness and accuracy of their district's census, selected enumerators. Preference wherever possible was given to veterans. Because the Census Act of June 18, 1929, did not require enumerators to hold civil service status, to a certain extent political patronage played a role in the selection of enumerators.

Instructions ranged from how to care for schedules and deal with untruthful replies to how to contact a supervisor. Enumerators were to keep schedules in a safe place, not to accept false statements, and to communicate with supervisors through the mail-except in cases of emergency, when use of a telephone or telegraph was authorized. Instruction number 15 gave enumerators their charge. It read, "It is your duty personally to visit every family and farm within your territory; to obtain the information required with reference to them; and to enter the same on the census schedule." Instruction number 20 forbade enumerators from communicating to "any person any information" obtained in the discharge of his or her official duties and explained the penalty for doing so. Disclosing any information could result in an enumerator being fined up to $1,000 and imprisoned up to 2 years.

Most enumerators' territories consisted of a single enumeration district. However, as there were 120,105 separate districts, some enumerators were assigned more than one. Every enumerator was to devote at least 8 hours per day to canvassing, beginning on April 2. They were to work alone and were not to combine their work for the Census Bureau with any other occupation. They were to complete the Population Schedule for every household by hand, and other schedules as necessary, including the Unemployment Schedule and the General Farm Schedule. At the end of each day, enumerators were to mail report cards to their supervisor, informing them of the work completed. The enumeration was to be completed with in 2 weeks for districts that had 2,500 inhabitants or more in the 1920 census and within 30 days in all other districts.

Enumerators were paid a piece rate that amounted to $.04 or $.05 per person enumerated and $.40 or $.50 per farm enumerated. Under exceptional circumstances, enumerators could earn up to $.20 per person and up to $5.00 per farm.

The enumerators' work and the census in general were followed closely in the news media. The New York Times alone carried more than 350 articles about the census in 1930. Prior to April 1, articles focused primarily on the appointment of enumerators, efforts to inform the public about the census, and the questions to be asked. The 1930 population census asked 32 questions about each person (see side bar). One question that had not been asked before was whether the family owned a radio set.

Once the canvassing began, some articles discussed the enumerators' methods and one even described a group of criminals posing as enumerators. Most of the articles were human-interest stories about individual enumerators and their work. Sample headlines from the Times read, "Waukegan Enumerator Names Baby to Count It," "Iowan, Sleeping in 2 Counties, Listed Where Head Rests," "Enumerator Saves Life," "Snow and Bad Weather in Western States Cause Enumerators to Cover Territories on Skis and Horseback."

The greatest coverage that the census received in the news media, however, came in April and May as the results were released by the government. On April 3, the Times announced that Centre Town, MO, was the first to report. On that same day, the paper carried an article with the headline, "Sing, Sing Prison Census Planned; Warden Lawes Recognized as Head of Family of 2,178 Convicts." In May, the paper reported that Culver City, California's population had increased by 1011.5 percent since the 1920 census.

When their work was completed, the 1930 census enumerators had counted nearly 123 million people, 16.1 percent more than in the 1920 census, and from the data they collected, the Bureau of the Census produced 35,700 pages of reports. 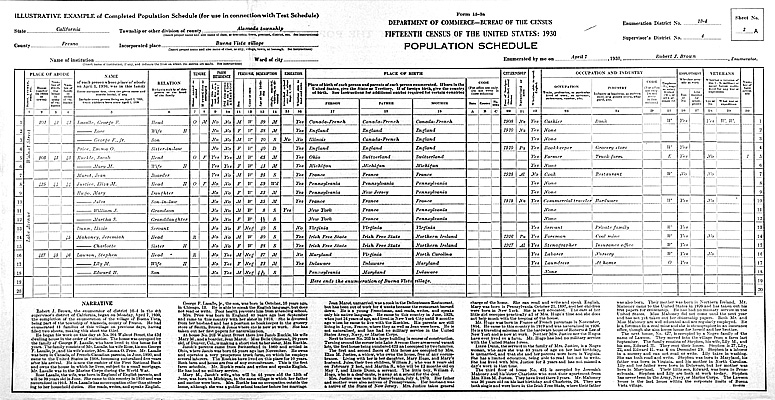 Note
The document featured in this article comes from the Records of Bureau of the Census, Record Group 29, and is housed in the National Archives Building in Washington, DC.