The 1897 Petition Against the Annexation of Hawaii

When the Hawaiian islands were formally annexed by the United States in 1898, the event marked the end of a lengthy internal struggle between native Hawaiians and non-native American businessmen for control of the Hawaiian government. The previous year, an annexation treaty was blocked when the newly-formed Hawaiian Patriotic League, composed of native Hawaiians, successfully petitioned the U.S. Congress to oppose it. Read more... 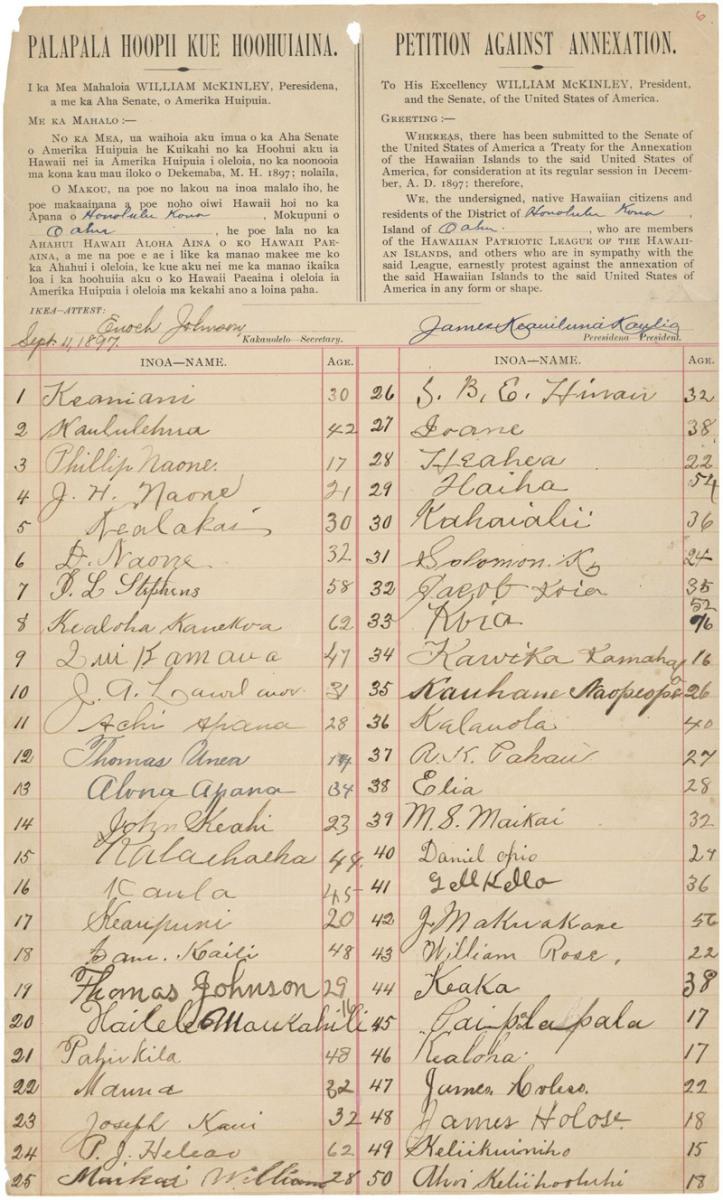 Petition Against the Annexation of Hawaii from Hui Aloha 'Aina (Hawaiian Patriotic League), With 21,269 Signatures of Native Hawaiians, 1897 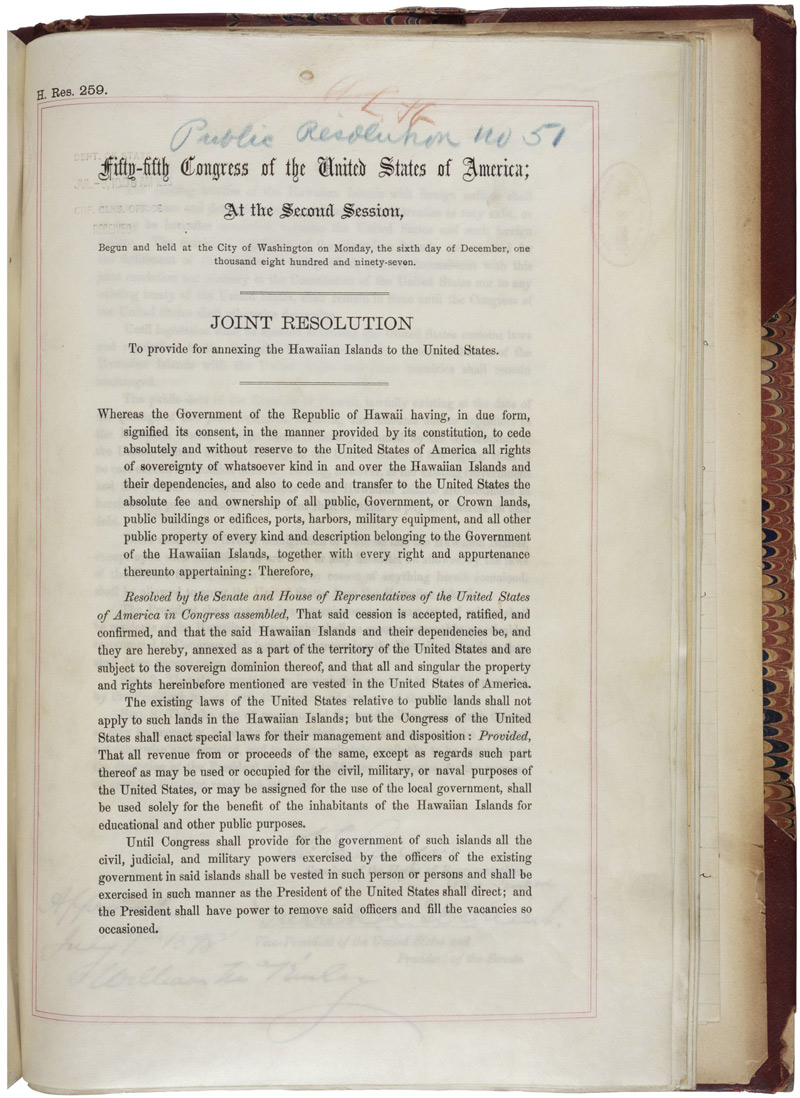 Joint Resolution of Congress to Provide for Annexing the Hawaiian Islands to the United States, 7/7/1898 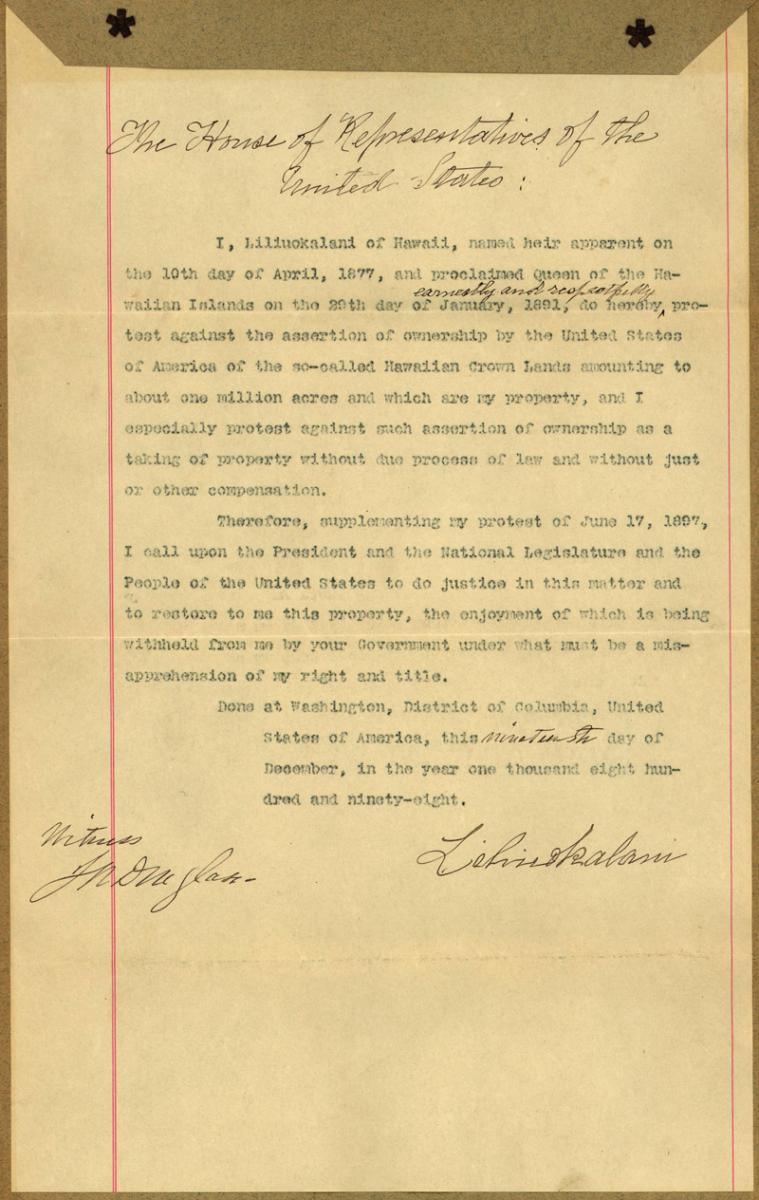 Letter from Lili’uokalani, Queen of Hawaii, to the U.S. House of Representatives Protesting U.S. Assertion of Ownership of Hawaii, 12/19/1898

The Petition Against Annexation of Hawaii on DocsTeach asks students to explore the petition signed by over 21,000 native Hawaiians against a treaty that would have annexed Hawaii to the United States. Students need to figure out what potentially annexed territory the petition is about.

For centuries the islands of Hawaii were ruled by warring factions. In 1810, King Kamehameha unified all of the Hawaiian Islands into one royal kingdom. Later, the traditional Hawaiian monarchy was overthrown in favor of a constitutional monarchy. Eventually, the monarchy itself was abandoned in favor of a government elected by a small group of enfranchised voters, although the Hawaiian monarch was retained as the ceremonial head of the government.

During the 19th Century, Western influence grew. David Kalākaua was the last king of Hawaii, ruling from 1874 to 1891. In 1885, following a tradition of treaties favoring the United States, he signed a trade reciprocity treaty with the United States. This free-trade agreement made it possible for sugar to be sold to the U.S. market tax-free.

By 1887, when the Reciprocity Treaty was renewed, the Kingdom of Hawaii was overrun by white landowners, missionaries, and businessmen. The king promoted Hawaiian culture and traditions, but Hawaiian sovereignty suffered. U.S. sugar plantation owners came to dominate the politics of the islands. Their presence impacted social and economic life as well – the landholding system changed, and many aspects of traditional culture were prohibited, including teaching the Hawaiian language and performing the native Hula dance.

On July 6, 1887, a militia affiliated with the Hawaiian League, a non-native mostly U.S. businessmen's political party opposed to the king, under the leadership of Lorrin Thurston, threatened King Kalākaua. He was forced to sign a new constitution stripping him of his power and many native Hawaiians of their rights. It also replaced the cabinet with non-native politicians and businessmen. The new constitution came to be known as the "Bayonet Constitution" because Kalākaua signed it under duress.

When King Kalākaua died in 1891, his sister Lili'uokalani succeeded him. Though she introduced a new constitution that would restore her power and Hawaiian rights, she would be Hawaii's last monarch. Her move was countered by the "Committee of Safety," a group of non-native U.S. businessmen and politicians with sugar interests. Led by Sanford Dole, they had monetary reasons for doing so – they feared that the United States would establish a tariff on sugar imports, endangering their profits, and wanted to protect Hawaii's free-trade status. The United States was the major importer of Hawaiian agricultural products.

Supported by John Stevens, the U.S. Minister to Hawaii, and a contingent of Marines from the warship, U.S.S. Boston, the Committee overthrew Queen Lili'uokalani in a bloodless coup on January 17, 1893. The Committee of Safety proclaimed itself to be the Provisional Government.

Without permission from the U.S. State Department, Minister Stevens recognized the new government and proclaimed Hawaii a U.S. protectorate. President Benjamin Harrison signed a treaty of annexation with the new government. Before the Senate could ratify it, however, Grover Cleveland replaced Harrison as president and subsequently withdrew the treaty.

Dole sent a delegation to Washington in 1894 seeking annexation. Instead, President Cleveland appointed special investigator James Blount to look into the events in the Hawaiian Islands. The Blount Commission found that Lili’uokalani had been overthrown illegally, and ordered that the American flag be lowered from Hawaiian government buildings.

Lili'uokalani never regained power, however. Sanford Dole, leader of the Committee of Safety and the president of the Provisional Government of Hawaii, refused to turn over power. Dole argued that the United States had no right to interfere in the internal affairs of Hawaii. The Provisional Government then proclaimed Hawaii a republic – the Republic of Hawaii – in 1894, with Dole its first president.

The overthrow of Lili'uokalani and imposition of the Republic of Hawaii was contrary to the will of the native Hawaiians. In fact, there had been a series of rebellions by Native Hawaiians since the imposition of the Bayonet Constitution in 1887. On January 5, 1895, during the "Wilcox Rebellion," an armed revolt was suppressed by Republic of Hawaii forces. The leaders of the revolt were imprisoned along with Queen Lili'uokalani.

In March of 1897, William McKinley was inaugurated as President of the United States. McKinley was in favor of annexation, and the change in leadership was soon felt. On June 16, 1897, McKinley and three representatives of the government of the Republic of Hawaii – Lorrin Thurston, Francis Hatch, and William Kinney – signed a treaty of annexation. President McKinley then submitted the treaty to the U.S. Senate for ratification.

Queen Liliuokalani and her fellow citizens successfully protested the annexation by petitioning Congress. Two Hawaiian groups, Hui Aloha 'Aina and Hui Kulai'aina, one group for men and one for women, organized a mass petition drive. They hoped that if the U.S. government realized that the majority of native Hawaiian citizens opposed annexation, the move to annex Hawaii would be stopped.

Between September 11 and October 2, 1897, the two groups collected petition signatures at public meetings held on each of the five principal islands of Hawaii. The Hui Aloha 'Aina (translated as the Hawaiian Patriotic League) petition – clearly marked "Petition Against Annexation" and written in both the Hawaiian and English languages – was signed by 21,269 native Hawaiian people. That was more than half of the 39,000 native Hawaiians and mixed-blood persons reported by the Hawaiian Commission census for the same year.

Four delegates, James Kaulia, David Kalauokalani, John Richardson, and William Auld, arrived in Washington, DC, on December 6 with the 556-page petition in hand. That day, as they met with Queen Lili'uokalani, who was already in Washington lobbying against annexation, the second session of the 55th Congress opened. The delegates and Lili'uokalani planned a strategy to present the petition to the Senate.

The delegation and Lili'oukalani met Senator George Hoar, chairman of the Senate Committee on Foreign Relations on the following day, and on December 9, with the delegates present, Senator Hoar read the text of the petition to the Senate. It was formally accepted. The next day the delegates met with Secretary of State John Sherman and submitted a formal statement protesting the annexation to him. In the following days, the delegates met with many senators, voicing opposition to the annexation. By the time the delegates left Washington on February 27, 1898, there were only 46 senators willing to vote for annexation. The treaty was defeated in the Senate.

Other events, however, immediately brought the subject of annexation up again. On February 15, 1898, the U.S. Battleship Maine was blown up in Havana Harbor in Cuba. The ensuing Spanish-American War, part of which was fought in the Philippine Islands, established the argument that the Hawaiian islands would be strategically valuable as a mid-Pacific fueling station and naval installation.

The pro-annexation forces in Congress submitted a proposal to annex the Hawaiian Islands by joint resolution, which required only a simple majority vote in both houses. This eliminated the 2/3 majority needed to ratify a treaty, and by result, the necessary support was in place. House Joint Resolution 259, 55th Congress, 2nd session, known as the "Newlands Resolution," passed Congress and was signed into law by President McKinley on July 7, 1898 — the Hawaiian islands were officially annexed by the United States. Sanford Dole became the first Governor of the Territory of Hawaii.

In a last, unsuccessful attempt to return control of her homeland to native Hawaiians, Queen Lili’uokalani sent a letter of protest to the U.S. House of Representatives. She stated that her throne had been taken illegally, and that any U.S. efforts to annex Hawaii without the due process of law would be unacceptable.

As a territory, Hawaii had little power in the U.S. government, holding only one, non-voting representative in the House of Representatives. The territory status allowed rich, white plantation owners to import cheap labor and export their products to the mainland with low tariffs. These landowners used their power to keep Hawaii in territorial status.

Native Hawaiians and non-white Hawaiian residents, however, began to push for statehood. These residents wanted the same rights as U.S. citizens living in one of the 48 states. They wanted a voting representative in Congress and the right to elect their own governor and judges, who were currently appointed.

Over the course of the next 50 years, the Territory of Hawaii worked to achieve statehood. The legislature sent multiple proposals to Congress including a joint resolution requesting statehood in 1903, only to be denied. Other resolutions were similarly ignored.

In 1937, a congressional committee found that Hawaii met all qualifications for statehood and held a vote on statehood in Hawaii. Although this resulted in a vote in favor of statehood, the attack at Pearl Harbor paused all talks as the Japanese population in Hawaii came under suspicion by the U.S. government.

Hawaii’s territorial delegate Joe Farrington, elected in 1942, revived the battle for statehood after the war. While the House debated and passed multiple Hawaii statehood bills, the Senate did not vote on them. Hawaiian activist groups, students, and political bodies sent in letters endorsing statehood in hopes of spurring congressional action.

Finally, in March 1959, a Hawaii statehood resolution passed both the House and the Senate, and President Eisenhower signed it into law. That June, the citizens of Hawaii voted on a referendum to accept the statehood bill.

On August 21, 1959, President Eisenhower signed the official proclamation admitting Hawaii as the 50th state, marking the end of over half a century of work for Hawaiian statehood.

Portions of this text were adapted from the article: Schamel, Wynell and Charles E. Schamel. "The 1897 Petition Against the Annexation of Hawaii." Social Education 63, 7 (November/December 1999): 402-408.