At the height of immigration in the early 20th century, with thousands of immigrants entering the United States every day, the initial immigration inspectors did not have enough time to fully investigate each individual suspected of violating the immigration law. Instead, these suspected immigrants would be referred to a Board of Special Inquiry which would hold hearings to decide the merits of the individual immigrant's case. While the most common violation was to be considered a "likely public charge" (or LPC) on economic or medical grounds, people could be deported for a variety of reasons. Though approximately10% of i mmigrants would experience hearings of the Board of Special Inquiry at Ellis Island, only 2% of immigrants were deported for legal or medical reasons.

The National Archives at New York City's records contain details of these investigations. As part of a Habeas Corpus case filed by the immigrant's family against the Commissioner of Immigration for detaining their family member, evidence would be provided by both sides detailing the immigrant's beliefs, economic conditions, and medical status. Among these records are transcripts of testimony from the Board of Special Inquiry, medical certificates, letters from family members, and other documents. These documents can be used to show students the process of immigration to the United States and the laws established to prevent certain people from walking through the Golden Door. 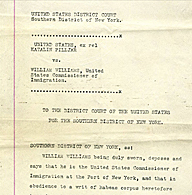 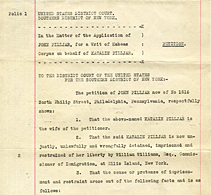 If a teacher finds unique and effective ways to use these documents in their classroom and would like to share them with other teachers, please contact christopher.zarr@nara.gov