US Enters the Korean Conflict

In 1948 the Korea Peninsula was divided between a Soviet-backed government in the north and an American-backed government in the south. War broke out along the 38th parallel on June 25, 1950. On that day, North Korean troops coordinated an attack at several strategic points along the parallel and headed south toward Seoul. The United Nations Security Council responded to the attack by adopting a resolution that condemned the invasion as a "breach of the peace." Read More... 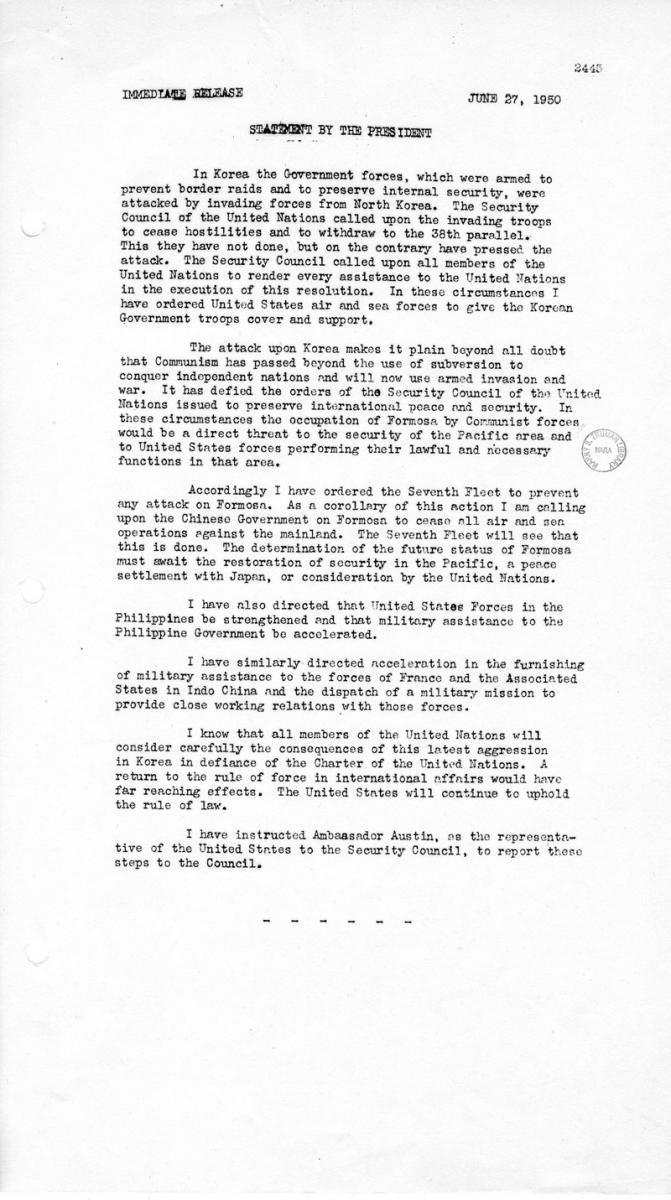 President Truman's Statement on the Situation in Korea, 6/27/1950 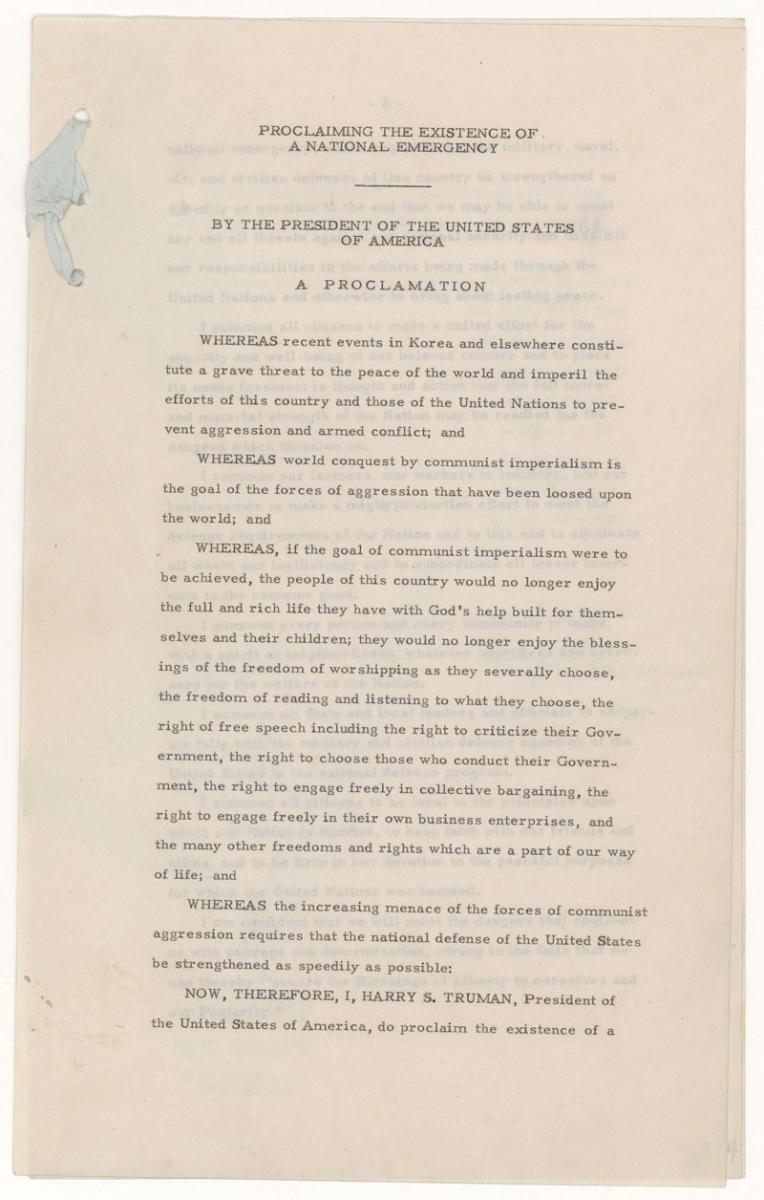 Presidential Proclamation 2914 of December 16, 1950, by President Harry Truman Proclaiming the Existence of a National Emergency in Korea, 12/16/1950 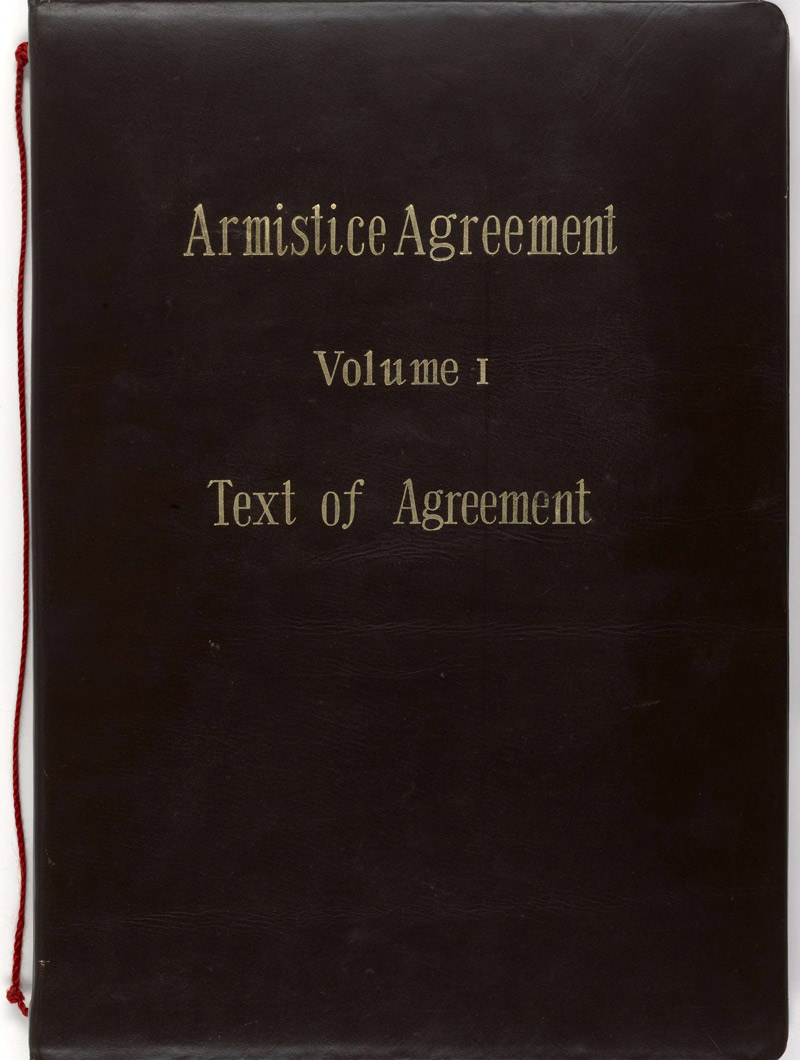 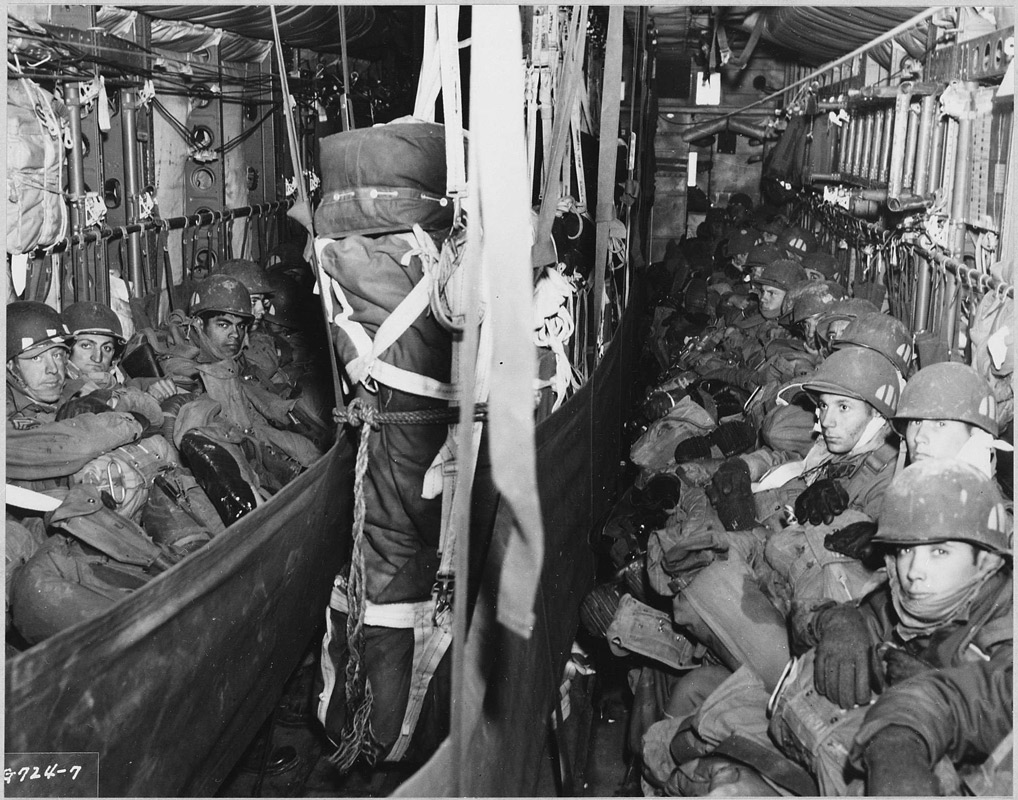 Paratroopers Flying to the Dropzone in Korea, 3/1951 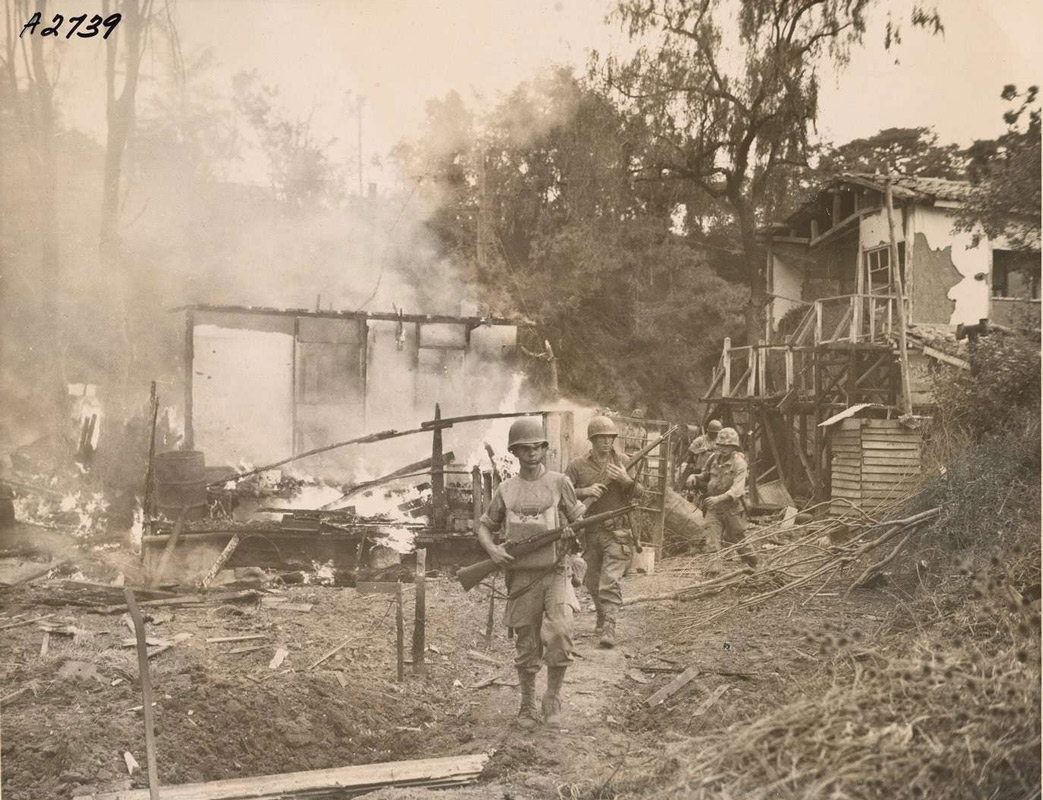 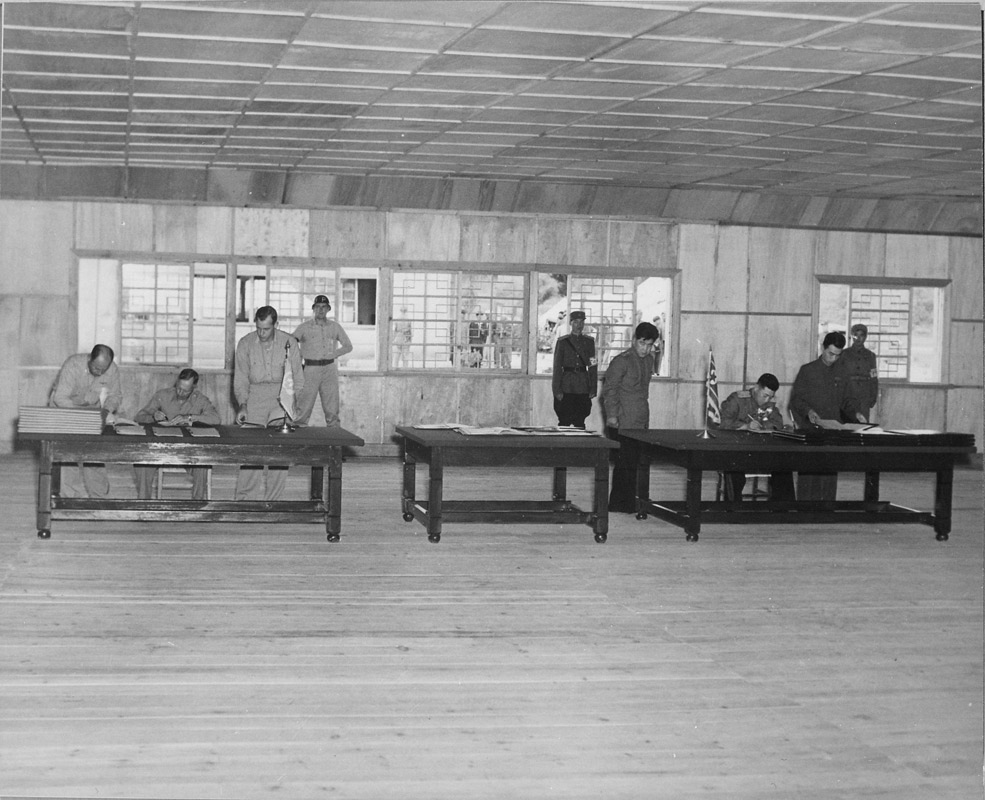 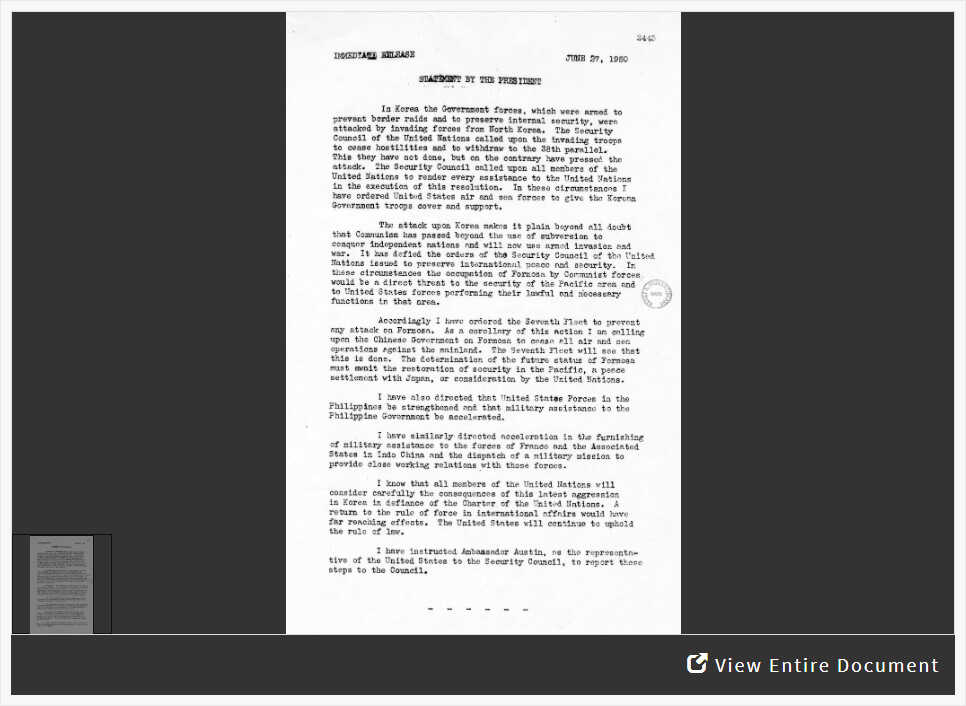 In the activity Containment in Korea: Entering the Korean War, students analyze President Truman's press release of June 27, 1950, announcing that he was committing American forces to a combined United Nations military effort in Korea at the beginning of the Korean War. Students reflect on the language used in Truman's statement to the American people, compare it with Soviet views of events in Korea, and identify how Truman's words reflect the US policy of containment during the Cold War.

Find other teaching activities related to the Cold War on DocsTeach.

While the end of World War II brought peace and prosperity to most Americans, it also created a heightened state of tension between the Soviet Union and the United States. Fearing that the Soviet Union intended to "export" communism to other nations, America centered its foreign policy on the "containment" of communism, both at home and abroad. Although formulation of the Truman Doctrine, Marshall Plan, and the Berlin Airlift suggested that the United States had a particular concern with the spread of communism in Europe, America's policy of containment extended to Asia as well. Indeed, Asia proved to be the site of the first major battle waged in the name of containment: the Korean War.

The division of Korea into two halves had come at the end of World War II. The United States and the Soviet Union agreed to temporarily divide Korea and oversee the removal of Japanese forces. In August of 1945, the Soviet Union occupied Korea, which had been under Japan's control since 1910. The United States quickly moved its own troops into southern Korea. Japanese troops surrendered to the Russians in the north and to the Americans in the south.

The U.S.-Soviet agreement temporarily divided Korea along the 38th parallel, a latitudinal line that bisected the country; this avoided a long-term decision regarding Korea's future. This line became more rigid after 1946, however, when Kim Il Sung organized a communist government in the north –the Democratic People's Republic. Shortly after, nationalist exile Syngman Rhee returned to Korea and set up a rival government in the south –the Republic of Korea (ROK). Each government hoped to reunify the country under its own rule.

On June 25, 1950, North Korean troops coordinated an attack at several strategic points along the 38th parallel and headed south toward Seoul. The United Nations Security Council voted 9-0 to adopt a resolution condemning the invasion as a "breach of the peace." The Security Council did not have a Soviet delegate, since six months prior, the Soviet Union had left to protest the United Nation's refusal to seat a delegate from China.

President Harry S. Truman quickly committed American forces to a combined United Nations military effort and named Gen. Douglas MacArthur Commander of the U.N. forces. Fifteen other nations also sent troops under the U.N. command. Truman did not seek a formal declaration of war from Congress; officially, America's presence in Korea amounted to no more than a "police action."

However, the entry of the United States into the conflict signaled a reversal of policy toward Korea. Although it backed the government of Syngman Rhee, the United States had begun withdrawing its troops from South Korea in 1948. As late as January of 1950, Secretary of State Dean Acheson had implied that the Korea Peninsula lay outside the all-important "defense perimeter" of the United States, a statement that some took to mean that the United States would not defend the ROK from communist attack.

The decision to intervene in Korea, however, grew out of the tense atmosphere that characterized Cold War politics. On the eve of the North Korean invasion, a number of events had made Truman anxious. The Soviet Union exploded an atomic bomb in 1949, ending the United States' monopoly on the weapon. In Europe, Soviet intervention in Greece and Turkey had given rise to the Truman Doctrine and the Marshall Plan, which funneled aid to war-torn Europe in the hopes of warding off communist political victories. In early 1950, President Truman directed the National Security Council (NSC) to conduct an analysis of Soviet and American military capabilities. In its report, known as "NSC 68," the Council recommended heavy increases in military funding to help contain the Soviets.

Events in Asia also contributed to an increased sense of insecurity. In 1949 China underwent a revolution that brought Mao Zedong and his Communist party into power. The nationalists, led by Chiang Kai-Shek, had retreated to the island of Formosa (Taiwan) while they continued their war with mainland China. Mao quickly moved to ally himself with the Soviet Union, and signed a treaty with the Soviets in 1950. The Truman administration faced criticism from Republicans who claimed he had "lost" China. They criticized him for not providing enough aid to the Chinese nationalists. The suggestion by Secretary of State Dean Acheson that the administration recognize the communist government of China only gave them more ammunition for their attacks.

The Truman administration also faced internal criticism regarding its commitment to anti-communism at home. Republican Senator Joseph McCarthy of Wisconsin had recently begun his infamous hunt for communists within the U.S. Government. Although McCarthy was just getting started, the recent trials of Alger Hiss and others for espionage left the Truman administration apprehensive about its anti-communist credentials. Truman and his advisors found themselves under increased domestic pressure not to appear "soft" on communism abroad.

Thus, when North Korean troops invaded the South, the Truman administration seized upon the opportunity to defend a non-communist government from invasion by communist troops. Determined not to "lose" another country to communism, and interested in shoring up its anticommunist credentials, the Truman administration found itself defending a nation a world away from U.S. soil. Yet Truman's response was not merely a response to internal pressure. The invasion of South Korea made Truman genuinely fearful that the Soviet Union and China intended to expand the sphere of communism throughout Asia.

President Truman released a statement on June 27, 1950, illustrating his concern with communist aggression and expansion. He argued that "communism has passed beyond the use of subversion to conquer independent nations and will now use armed invasion and war." Truman's statement suggests that he believed the attack by North Korea had been part of a larger plan by communist China and, by extension, the Soviet Union. The President believed that the Korean situation was similar to that of Greece in 1947. He informed his advisors that he believed the invasion was "very obviously inspired by the Soviet Union." This gave America a moral imperative to act. "If we don't put up a fight now," Truman observed to his staff, there was "no telling what they'll do."

His concern over the future of anti-communist governments in Asia showed in his public statement. Truman pledged to defend Formosa (Taiwan) from attack and to support French forces in Indochina, a conflict that would eventually escalate into the Vietnam War. Yet Truman had no wish to provoke a full-scale war with the Soviets. By blaming "communism" in the statement, as opposed to the Soviet Union, Dean Acheson later explained, the administration sought to give the Soviets a "graceful exit" and not provoke open confrontation with Russia.

Truman's statement also reflected a new military order. Although the United States took the lead in the Korean action, it did so under the rubric of the United Nations. Truman made it clear that his actions fell within the measures recommended by the United Nations, and reminded "all members of the United Nations" to "consider carefully the consequences of this latest aggression in Korea" and that America "will continue to uphold the rule of law."

Truman's statement was released to newspaper reporters. That afternoon, Truman attended a meeting of the United Nations and proposed a resolution urging all UN member nations to give assistance to South Korea. The meeting had been originally planned for the morning but was postponed to accommodate one of its members. Secretary of State Dean Acheson later reflected that the Soviets liked to point out that since the U.N. meeting occurred after the President's statement, Truman could not truthfully claim that his decision to commit forces was influenced by the wishes of the United Nations. When it did meet later that day, the United Nations passed his resolution, although a handful of dissenting countries abstained.