At the Constitutional Convention in 1787, delegates fiercely debated the issue of slavery. They ultimately agreed that the United States would potentially cease importation of slaves in 1808. An act of Congress passed in 1800 made it illegal for Americans to engage in the slave trade between nations, and gave U.S. authorities the right to seize slave ships which were caught transporting slaves and confiscate their cargo. Then the "Act Prohibiting the Importation of Slaves" took effect in 1808. However, a domestic or "coastwise" trade in slaves persisted between ports within the United States, as demonstrated by slave manifests and court records.

A warrant was issued for the ship Charming Sally in 1803. It ordered the marshal and deputies of the Massachusetts district to arrest and take into custody the ship Charming Sally and her appurtenances (equipment and cargo). A libel had been filed by Isaac Sherman of Boston. A libel is an accusation brought against someone or something claiming property ought to be seized, in this case the ship and its cargo for "transportation of slaves contrary to law." Court documents include depositions from Lewis Ferris, a boatswain in charge of the equipment and crew on the Charming Sally; and Phineas Dean, who described mistreatment of the enslaved people on the ship, including kicking and shackling. 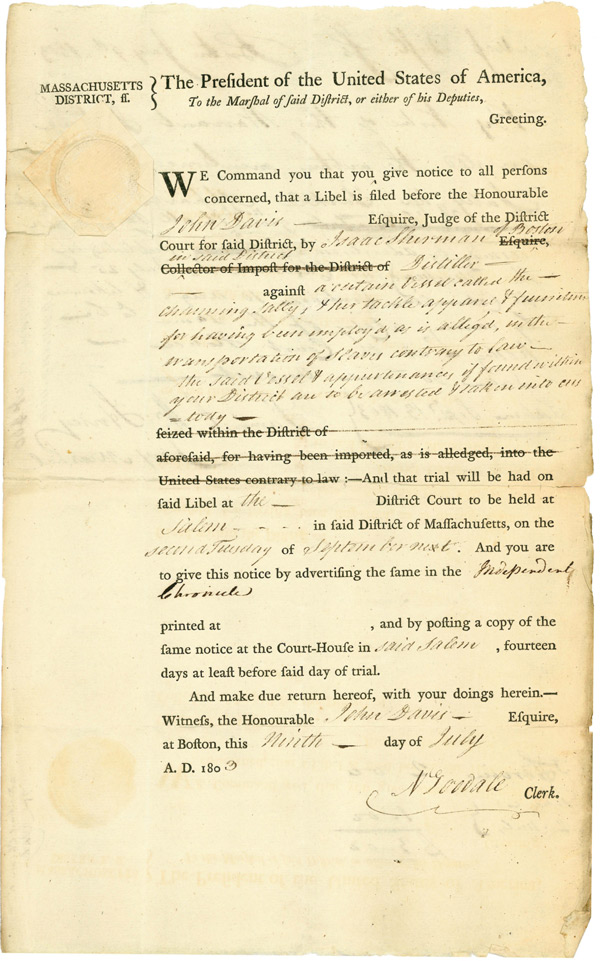 Warrant for the Ship Charming Sally 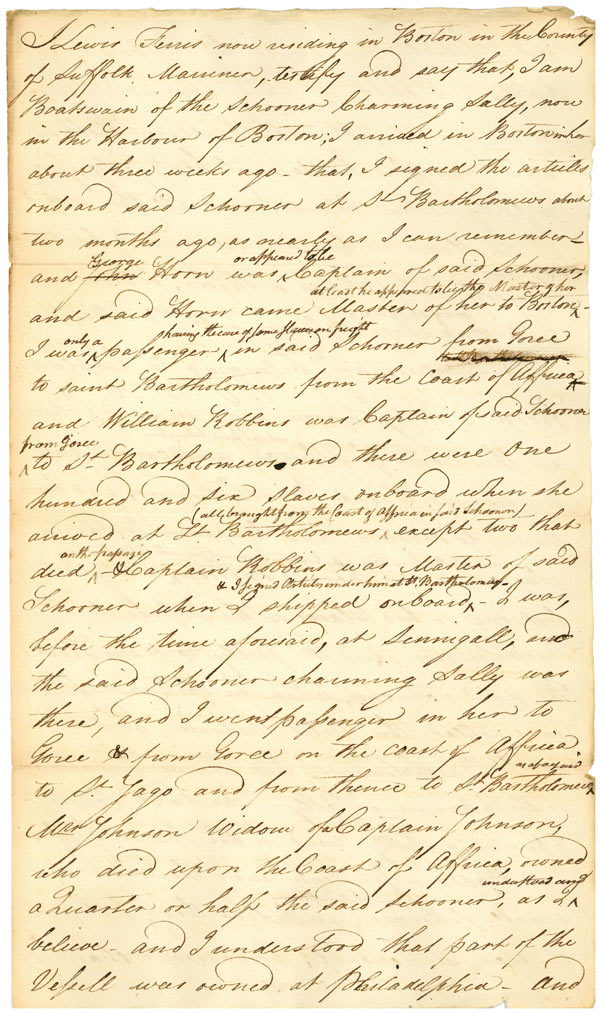 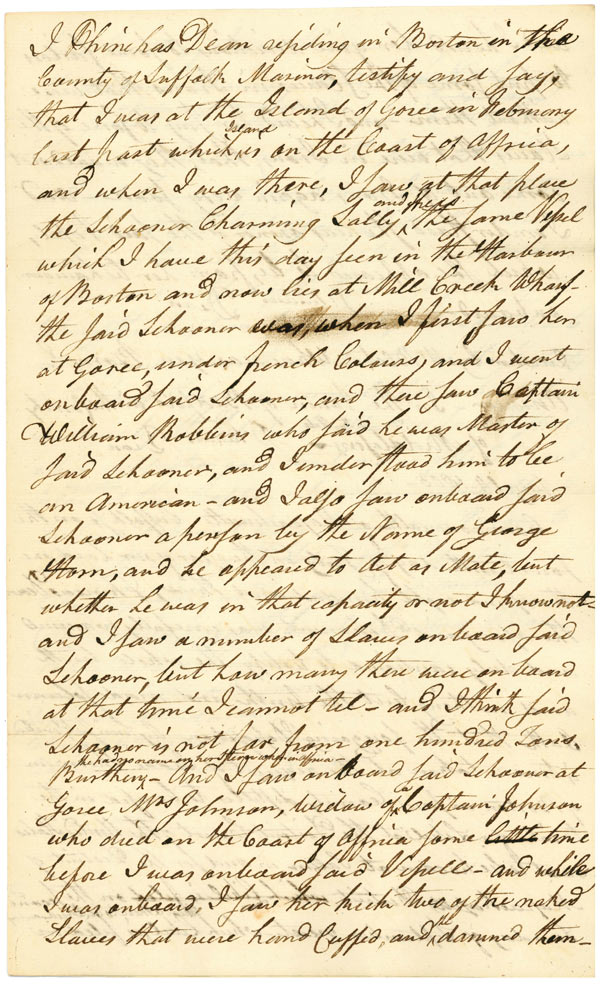 The Act Prohibiting the Importation of Slaves, 1808 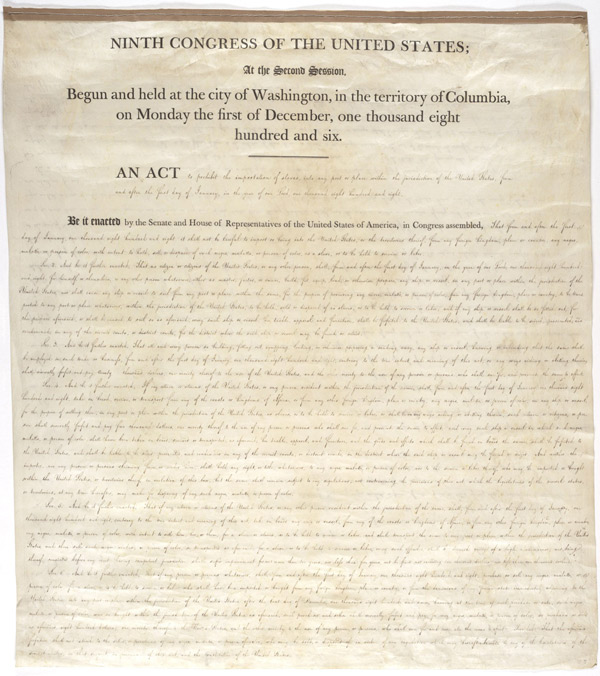 Act Prohibiting the Importation of Slaves

Article 1, Section 9 of the Constitution stated that Congress could not prohibit the "importation" of persons prior to 1808. Twenty years later, the Act "to prohibit the importation of slaves in any port or place within the jurisdiction of the United States, from and after the first day of January [1808.]" was passed. The 1808 Act imposed heavy penalties on international traders, but did not end slavery itself nor the domestic sale of slaves. Not only did it drive trade underground, but ships caught illegally trading were often brought into the United States and its passengers sold into slavery. 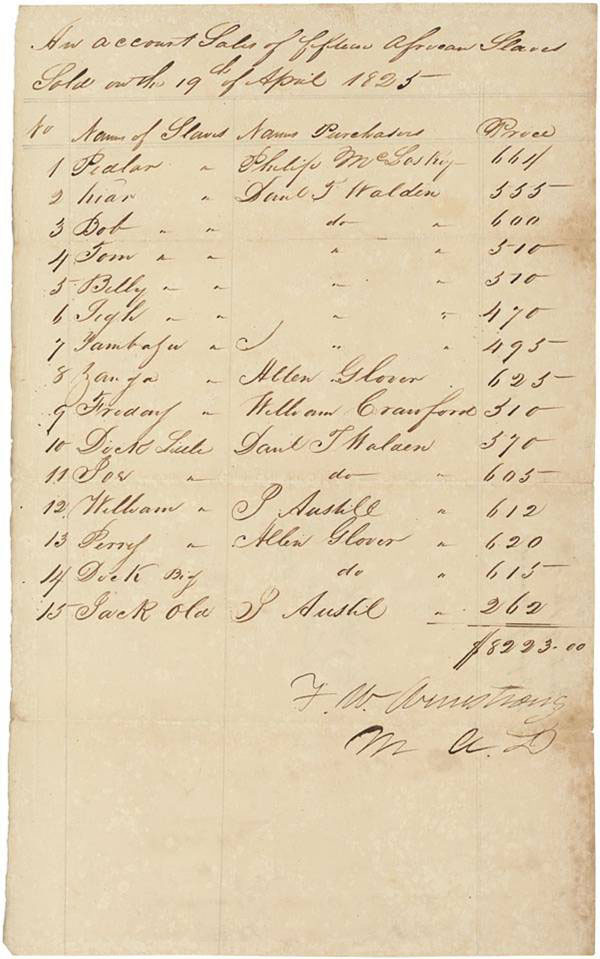 This case from 1825 tells the story of the illegal importation of slaves. A ship captain was convicted and the ship's cargo, including the enslaved people on board, was sold, with the proceeds of the sale turned over to the court. The account of the sale of "Fifteen African Slaves" sold on April 19, 1825 lists the enslaved people and their sale price. 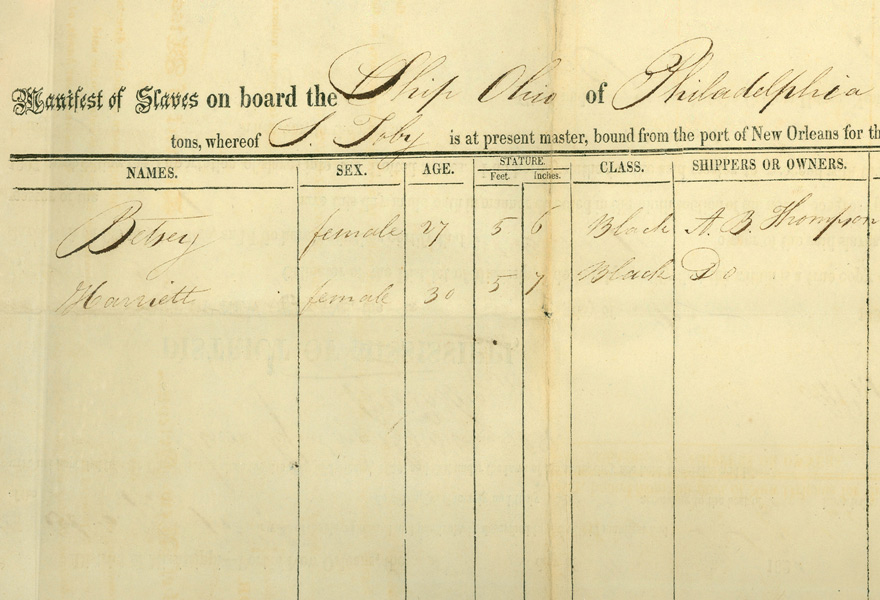 Slave Manifest for the Ship Ohio

This manifest (a list of passengers or cargo aboard a ship) shows two enslaved women named Betsey and Harriet who were being transported aboard the ship Ohio from New Orleans to Philadelphia in 1821. It includes the sworn statement of the ship captain that he was not engaged in the transatlantic slave trade. Though the Act Prohibiting Importation of Slaves had been enacted in 1807, the interstate sale of slaves remained legal. 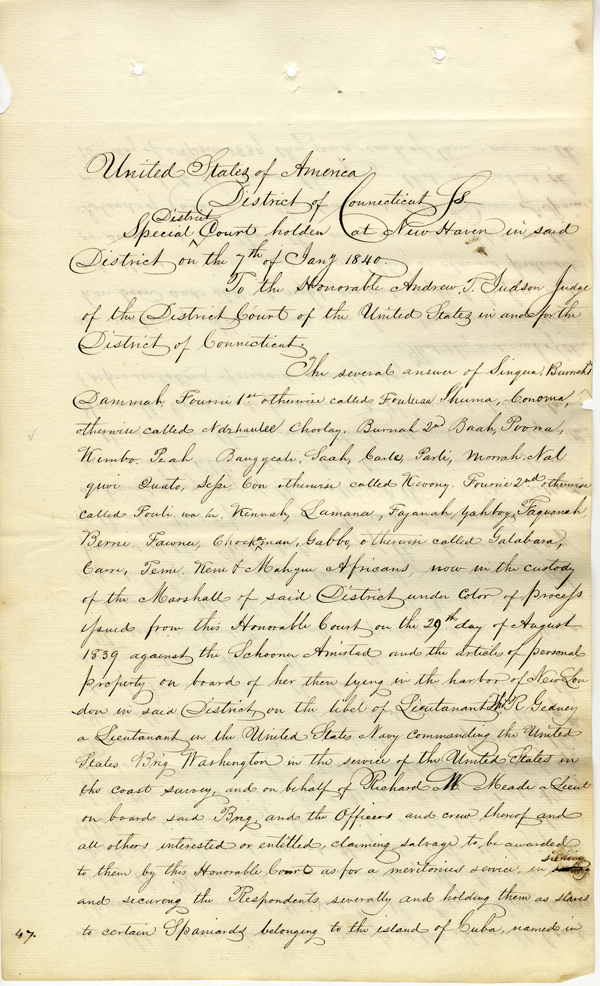 Answer of the Proctors for the Amistad Africans in the District Court Case, Conveying Their Position That They Are Free and Not Slaves

In 1839, Portuguese slave hunters abducted a large group of Africans from Sierra Leone and shipped them to Havana, Cuba, a center for the slave trade. Two Spanish plantation owners purchased 53 Africans and put them aboard the Cuban schooner Amistad to ship them to a Caribbean plantation. The Africans aboard killed the captain and cook and took over the Amistad, sailing north. The U.S. brig Washington captured the Amistad off the coast of Long Island, NY. Murder charges against the Africans were dropped, but the commander of the Washington submitted a libel – an accusation claiming the Amistad and its cargo ought to be seized for violating the law forbidding the slave trade – in order to receive compensation or "salvage rights" for apprehending the ship. Abolitionists hired attorneys to serve as proctors for, or represent, the Africans. The case ultimately went to the Supreme Court in 1841, when former President John Quincy Adams defended the right of the accused Africans to fight to regain their freedom. The Court decided in favor of the Africans.

Read more about The Amistad Case. 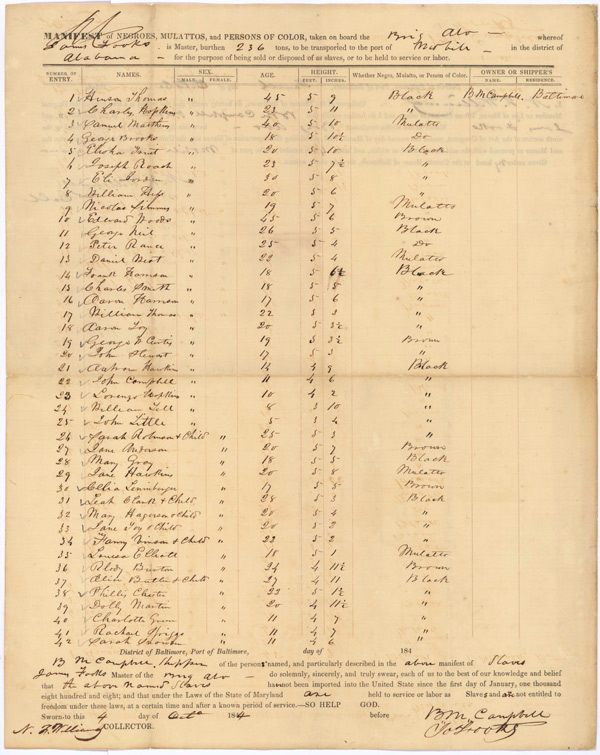 Slave Manifest from the Brig Alo

After Congress prohibited the foreign importation of slaves into the United States in 1808, slaves were still sold and transported within the boundaries of the United States. In order to document the movement of this human cargo from port to port, and to verify that they hadn't been imported, the Customs Service created specific manifests. This is a list of 48 enslaved people who were transported to Mobile, Alabama, aboard the Brig Alo in 1844.

The Schooner Patuxent left the port of New York for the coast of Africa. While off Cape Mount, she was seized by the U.S.S. Yorktown. The Yorktown was part of the "African Squadron" commissioned to help curtail the slave trade.

The Patuxent was found to be carrying supplies of rice and water large enough to feed approximately 250 slaves. The ship also contained a large quantity of pre-cut planking, which could possibly have been used to build a temporary slave deck. In the court case, the prosecution's other main piece of evidence was that Davis had taken on a short-term passenger named Captain Theodore Canot, who held a reputation as a slave trader.

The defense attorney claimed that Davis's rice cargo was for trading up and down the African Coast and that the planking was to be delivered for a building project. Davis admitted to transporting Captain Canot, but many people testified that it was general knowledge Canot had given up the slave trade. The defense had several people testify on Davis's behalf as to the quality of his character and the legitimacy of his cargo. The jury returned a unanimous verdict of not guilty. 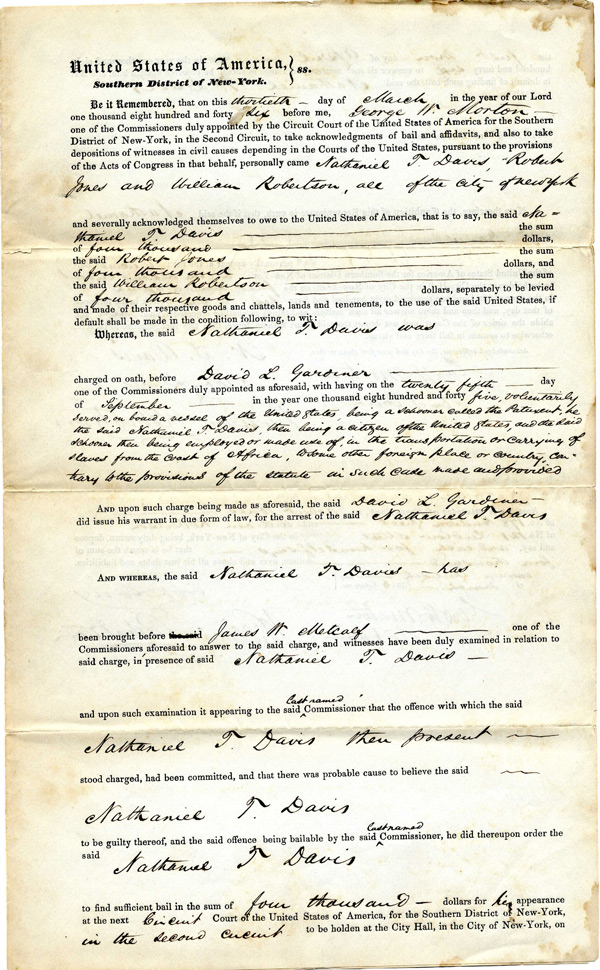 Subpoena of Captain Davis to Appear in Court 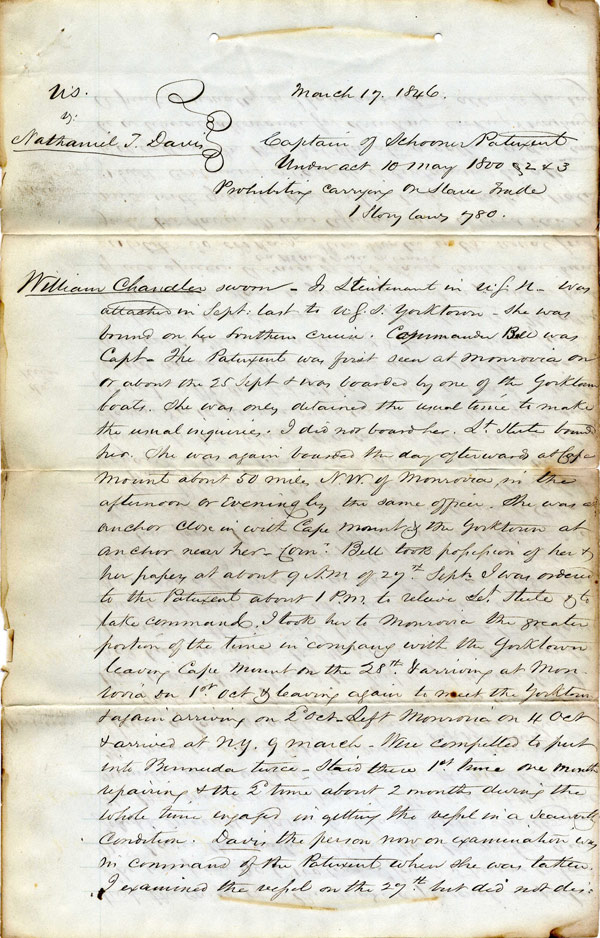 Deposition of William Chandler, of the U.S.S. Yorktown, Stating his Belief that the Patuxent was Rigged and Carried Supplies for Transporting Slaves

Even though Abraham Lincoln issued the Emancipation Proclamation in 1863, slaves were still being bought and sold in the south. Multiple bills of sale for slaves in Georgia were recovered when the U.S. Navy intercepted the southern ship Mary during the Civil War and claimed both the ship and its contents as a prize. 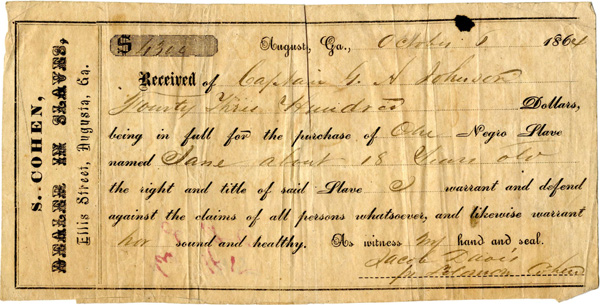 Receipt for the Purchase of an Enslaved Woman Named Jane 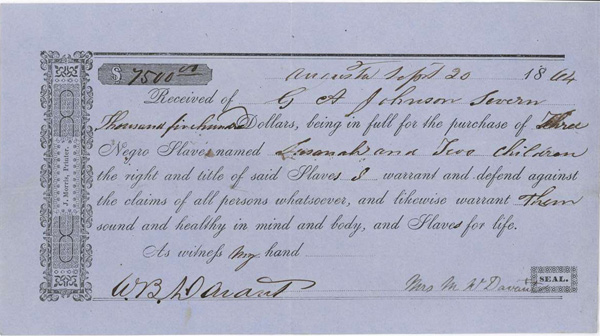 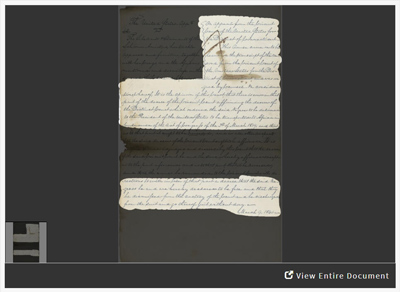 Find other teaching activities related to slavery on DocsTeach.