After World War II ended in 1945, the United States and the Soviet Union were the two dominant countries in the war-ravaged world. Each sought to maintain its supremacy by forging close economic, social, and military ties with neighbors and allies, and although some leaders had hoped to reduce arms levels, an arms race began after war ended. This constant pursuit for respect and supremacy was called the Cold War.

President Dwight D. Eisenhower campaigned in 1952 for the Republican nomination for president, hoping his wartime service as the supreme allied commander in Europe would prove his ability to lead and defend America. The outgoing president, Harry S. Truman, had been forced to recognize that the wartime alliance with the Soviets had collapsed, and conflicts between the two superpowers were growing worse. Events like the Berlin crisis, the Berlin airlift, the fall of Chiang Kai-shek in China, the Soviets' first atomic bomb tests, and the Korean War suggested more conflict lay ahead. Eisenhower was elected by a landslide, and he believed he could build upon the warm working relationship he had with the Soviets during World War II. Joseph Stalin, the Soviet leader, died in 1953, and the Eisenhower administration had hopes of improving relations with his successor, Nikita Khrushchev, especially after the Soviet Union withdrew their military forces from neutral Austria in May 1955 and a summit meeting was held in Geneva, Switzerland, that July.

The Soviet Union's brutal crackdown on Hungarian attempts to democratize in 1956 appalled the West. Further demonstrative pronouncements from Khrushchev, such as his threatening warning "We will bury you," did little to reassure moderates. The United States began to monitor the Soviet Union more carefully and used intelligence assets, such as the U-2 spy plane, to reconnoiter the Soviet buildup of military forces. Western military officials were greatly afraid of a "bomber gap" that they thought was allowing the Soviet Union to produce more nuclear-capable bombers than NATO, and especially the United States, possessed. Neither the United States nor the USSR had yet launched a missile powerful enough to deliver a nuclear weapon to the other or to launch a satellite into Earth orbit. However, scientists were hard at work on both sides of the Iron Curtain trying to achieve the distinction of being the first to do so. U.S. military officials had two separate, competing programs trying to develop a missile with intercontinental capability. The rivalry between the Army and Navy resulted in delays, and, unfortunately for the United States, a decision by the Department of Defense gave priority to the fledgling, untested Navy offering called Vanguard. Meanwhile, the Army's Redstone program conducted test flights but was not allowed to launch satellites or to advance development ahead of the Navy's program, which was tasked with deploying America's first satellite. In the Soviet Union, an announcement in May 1957 hinted to the Soviet people that a launch would come soon. The propaganda value and scientific respect gained from such a launch would be great. In 1954 Werner von Braun, the head of the Army's program, had written, "It would be a blow to U.S. prestige if we did not do it first."

On October 4, 1957, the USSR launched the world's first intercontinental ballistic missile, with the first artificial Earth satellite, Sputnik, aboard. At first, some in the Eisenhower administration downplayed the satellite as a "useless hunk of iron." As David Halberstam wrote in The Fifties, "The success of Sputnik seemed to herald a kind of technological Pearl Harbor, which was exactly what Edward Teller said it was." Others in America and around the world saw Sputnik as an ominous leap ahead in prestige and military ability, whether or not the new missiles could actually hit a target with nuclear weapons. President Eisenhower and some of his advisors, when they realized the significance of the Soviet achievement, met to discuss the alarming developments. A memo of that meeting preserved the initial reactions of those present.

The launch of Sputnik gave the Soviet Union an enormous boost in world respect and influence. Politicians and average Americans reacted in shock, and demanded increases in military and science education spending. The eventual launch of Explorer I in January 1958 finally allowed the United States to enter the space race. However, it took later successes in the 1960s for the United States to surpass the propaganda coup achieved with the launch of Sputnik. 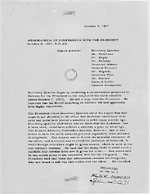