John Glenn blasted into orbit on February 20, 1962, part of a space race between the United States and the Soviet Union in which the Americans were lagging. The successful completion of Glenn's mission (he orbited the Earth three times) did much to restore American prestige worldwide.

Encased in a bulky, pressurized suit, strapped into a seat, and crammed into a tiny capsule, Glenn put his life at risk as he traveled at 17,500 miles per hour 160 miles above Earth. With great skill, courage, and grace, Glenn piloted the spacecraft manually as the autopilot function failed, and Mission Control wondered whether the capsule's life-saving heat shield would hold while reentering the atmosphere. Glenn returned to Earth after 5 hours, suffering no injury more severe than scraped knuckles, sustained as he prepared to exit the capsule after a safe splashdown.

After Glenn began his second orbit, Mission Control received a signal that the heat shield, designed to prevent the capsule from burning up during reentry, was loose. Although it could have been a faulty signal, Mission Control took no chances. Normally, the retropacket package would be jettisoned after the rockets were fired to slow the capsule for reentry. In this case, however, Glenn was ordered to retain the retropack to hold the heat shield in place.

These pages of the official flight transcript of Glenn's 1962 spaceflight document the reentry. While struggling to maintain control of the spacecraft, Glenn watched as huge chunks flew past the window and wondered whether it was the retropack or heat shield breaking up. The heat shield held. If it hadn't, Glenn and his capsule would have been incinerated. 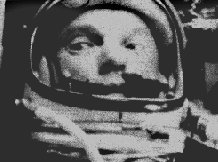 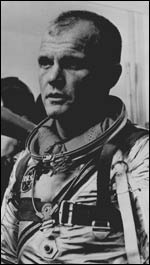