New York Ratification of the Bill of Rights 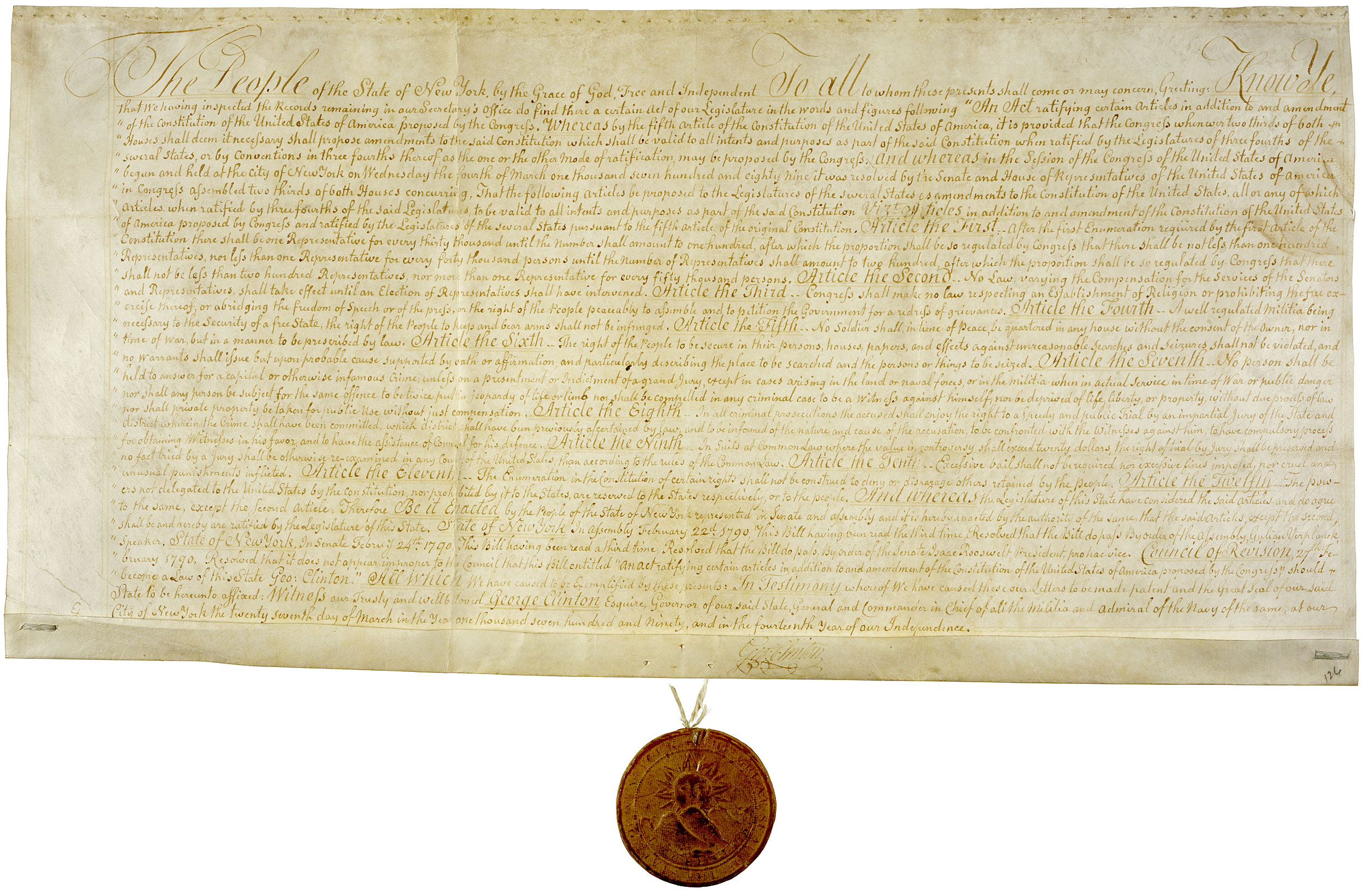 New York Ratification of the Bill of Rights March 27, 1790, General Records of the U.S. Government Document as seen in the Annals of Congress, 1st Congress (Library of Congress)

Throughout the summer of 1789, the first U.S. Congress engaged in intense debate about amending the Constitution of the United States. On September 25, by joint resolution, Congress passed 12 proposed articles protecting citizens' individual rights, enlarging the House of Representatives, and limiting the ability of members of Congress to alter their salaries. On October 2, at the request of Congress, President George Washington forwarded parchment copies to all of the state executives, including the states of Rhode Island and North Carolina even though they had not yet ratified the Constitution and therefore could not act on this resolution.

The states began the process of ratifying these 12 articles. Ratification of any article by at least three quarters of the states meant acceptance of that article as an amendment to the Constitution.

On January 11, 1790, the New York legislature convened in New York City. Two days later, Governor George Clinton sent the proposed amendments to them. The legislature ratified 11 of the 12 articles on February 24. Three days later, the state Council of Revision approved the act, making it law. The legislature then requested that Governor Clinton have an exemplification of the act (official copy of the ratification) made to send to the Federal Government. The document was prepared, and on March 27 Governor Clinton signed it and had the Great Seal of State affixed to it. Clinton sent the document to President Washington in New York City on April 2. Three days later, Washington forwarded New York's ratification to Congress.

On December 15, 1791, when the final votes from all the states were counted, the last 10 of the 12 articles were ratified. They became the first 10 amendments to the U.S. Constitution, known as the Bill of Rights. The first two articles were not ratified by the required three-quarters majority of states. Article I, which New York did ratify, would have enlarged the House of Representatives in increments from the original body of 65 to 100 and then to 200, after which Congress would regulate the size of the House with no more than one representative for each 50,000 people in a state. The second article, which New York did not ratify at the time, regulated the ability of Congress to alter its members' salaries. This article was eventually ratified on May 7, 1992, as the 27th Amendment to the Constitution.

The New York Ratification of the Bill of Rights is part of the chain of evidence in the stewardship of the National Archives that documents our rights as citizens.

The original New York Ratification of the U.S. Bill of Rights was on display for the exhibit New York: An American Capital from December 14-17, 2006 (and replaced thereafter with a facsimile copy). The display marks the first time the document has been exhibited in New York City since it was signed in 1790, according to the records of the National Archives.