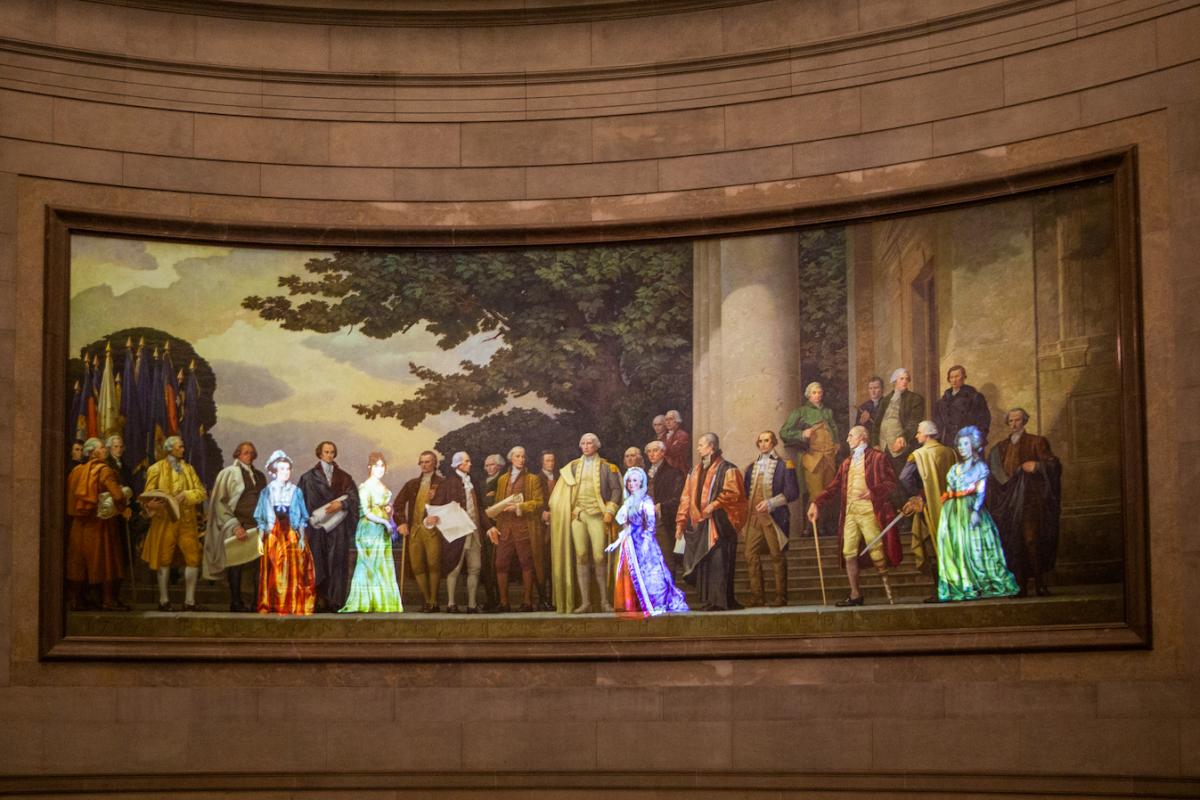 In honor of Cokie Roberts, the National Archives Foundation commissioned artist Samara King of Port Townsend, WA, to bring equality to the Rotunda murals with the addition of Abigail Adams, Dolley Madison, Martha Washington, and Eliza Hamilton (from left to right, shown at their ages in 1787).

Roberts died September 17 from cancer. The National Archives Foundation posthumously bestowed its 2019 Records of Achievement Award on Roberts during a November 13 event that celebrated her life and legacy. Her husband, Steven, who co-authored two books with her, accepted the award.

“Cokie dedicated her life to learning about and telling us the stories of women and their roles in our founding and in our government,” Ferriero said. “Her work extended far beyond the scope of well-known politicians and suffragists, often looking to ordinary women and their influence. She did so much to highlight the contributions of other women, it was a privilege to honor Cokie for her many contributions at the National Archives.”

The event included remarks from Speaker of the U.S. House of Representatives Nancy Pelosi and a panel discussion moderated by David M. Rubenstein with Amna Nawaz, Rebecca Roberts, Robin Sproul, and Nina Totenberg.

“Over 10 years together, Cokie and I often found ourselves in the Rotunda of the National Archives where the conversation turned to the Barry Faulkner murals depicting the signing of the Declaration of Independence and the Constitution,” Ferriero recalled. “Cokie always bemoaned the fact that there were no women depicted.”

In that spirit, the Foundation commissioned artist Samara King of Port Townsend, WA, to bring equality to the murals with the addition of Abigail Adams, Dolley Madison, Martha Washington, and Eliza Hamilton to ensure that, as Roberts would say, “We remember the ladies!” The images were projected onto the mural in the National Archives Rotunda in tribute to Roberts' dedication to learning about and telling the stories of women and their roles in our nation's founding and in our government.

Roberts was a frequent presence at the National Archives, often appearing at book talks, acting as the moderator for high-profile programs, and supporting the agency in a number of ways. These included interviewing former First Lady Laura Bush for the 2018 Records of Achievement Award; giving public talks on her books, Founding Mothers and Capital Dames; moderating the fifth and 11th annual McGowan Forums on Women in Leadership; starring in a film about the National Archives, called Democracy Starts Here; and in many other ways.

As part of the event, the National Archives Foundation also announced the Cokie Roberts Research Fund for Women’s History, which will support future historians researching women’s history at the National Archives. The Foundation declared November 13, 2019, a national day of remembrance in honor of Cokie Roberts. Organizations and individuals across the country took to social media to reinforce her influence and remember her legacy.

"Her wise counsel, intelligence, wit, and passion for the role of women in our society will be missed—but never forgotten,” Ferriero said.

The Records of Achievement Award is the highest honor given by the National Archives Foundation to an individual whose contributions have fostered a broader national awareness of the history and heritage of the United States as exemplified in National Archives records.

“Today’s tribute was a testament to the legacy Cokie Roberts has had on countless historical and cultural institutions across the nation,” said National Archives Foundation Executive Director Patrick Madden. “Her brilliance and warmth will continue to guide the Foundation’s work for years to come.”