Amelia Earhart and Fred Noonan disappeared during their attempt at a round-the-world flight in July 1937. The National Archives contains records relating to the proposed flight and the search for their airplane. 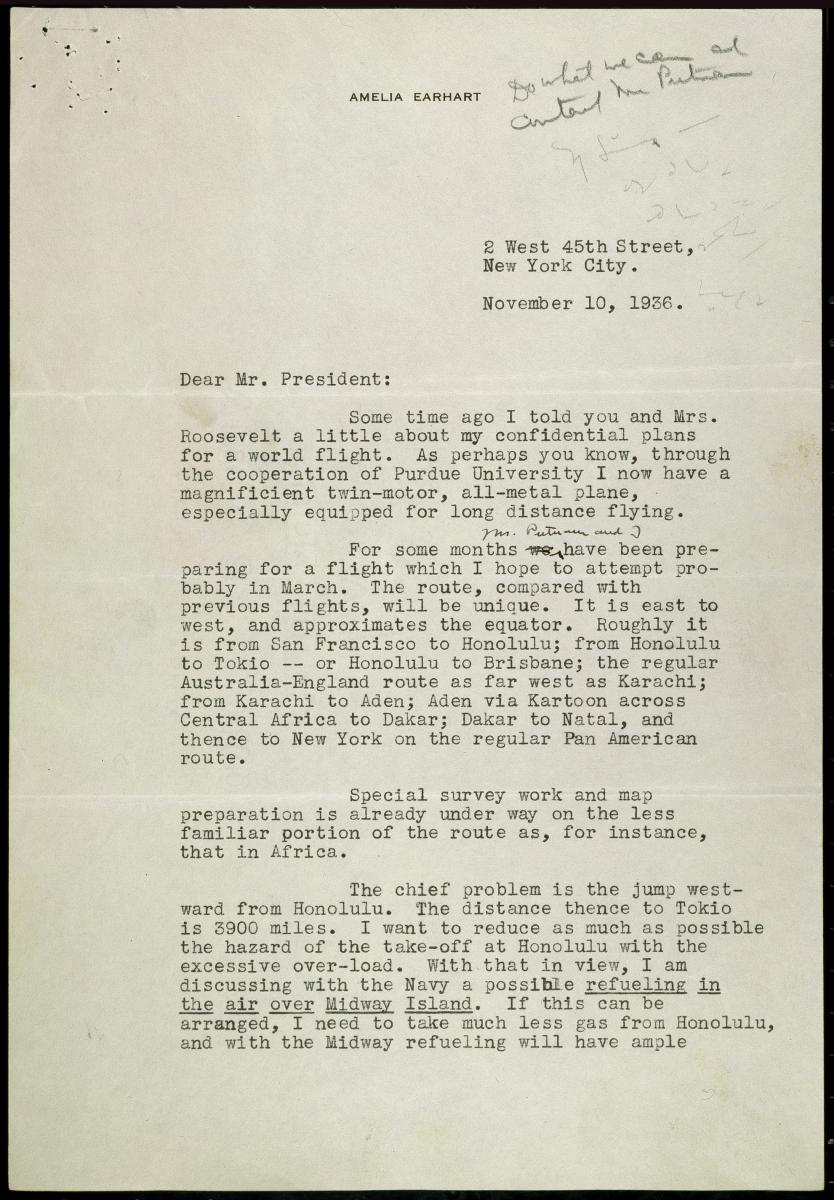 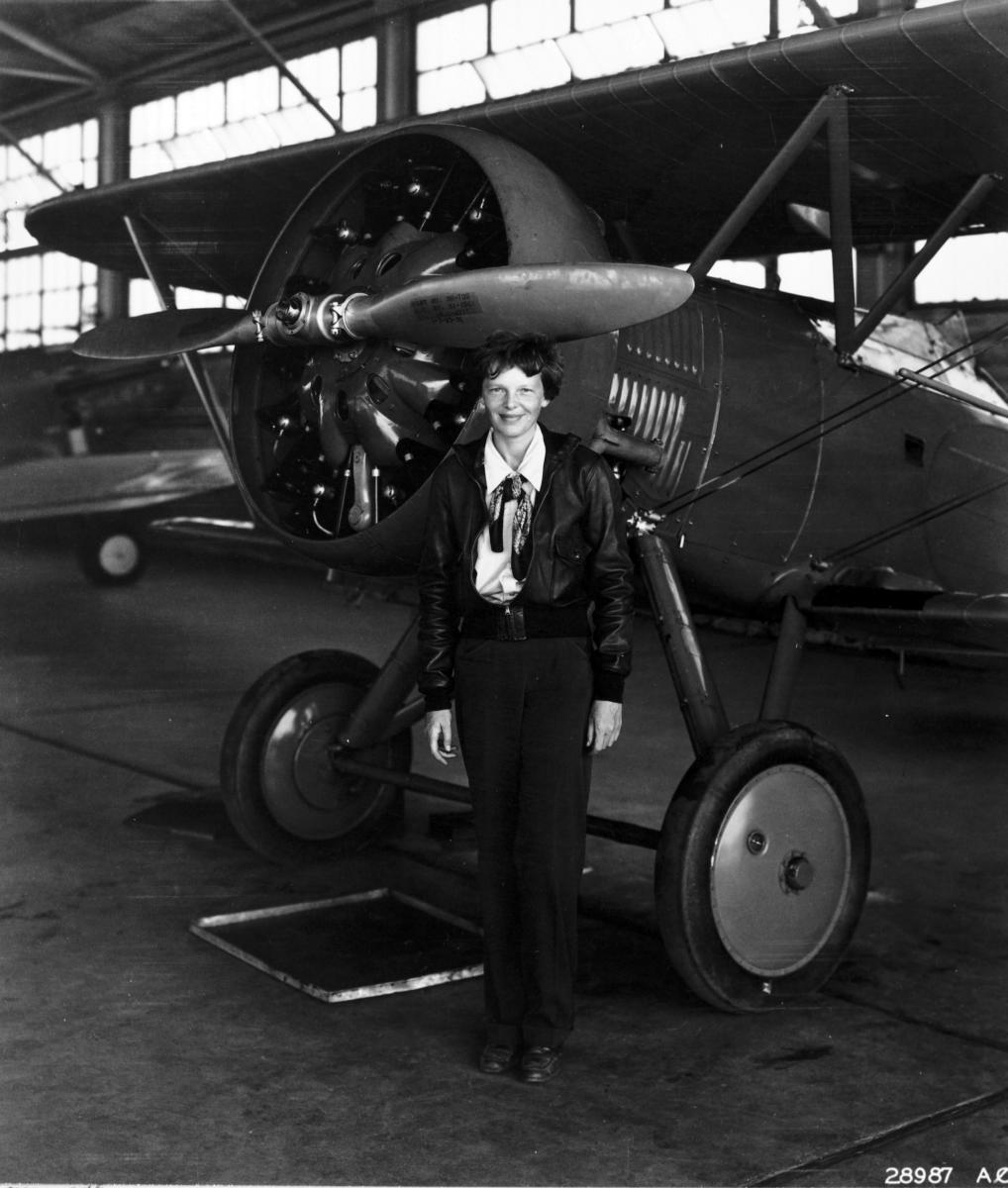 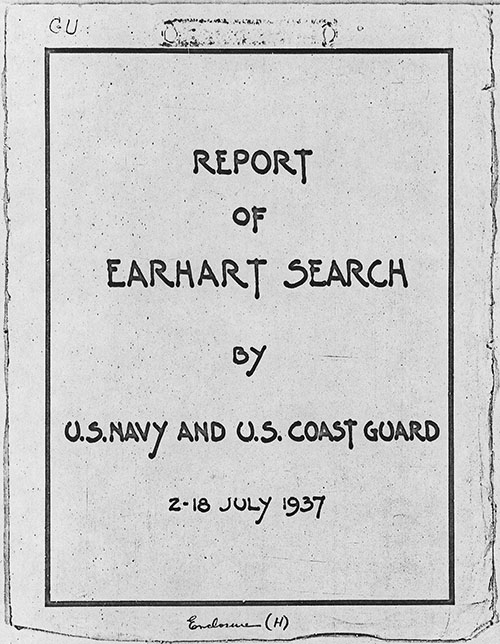 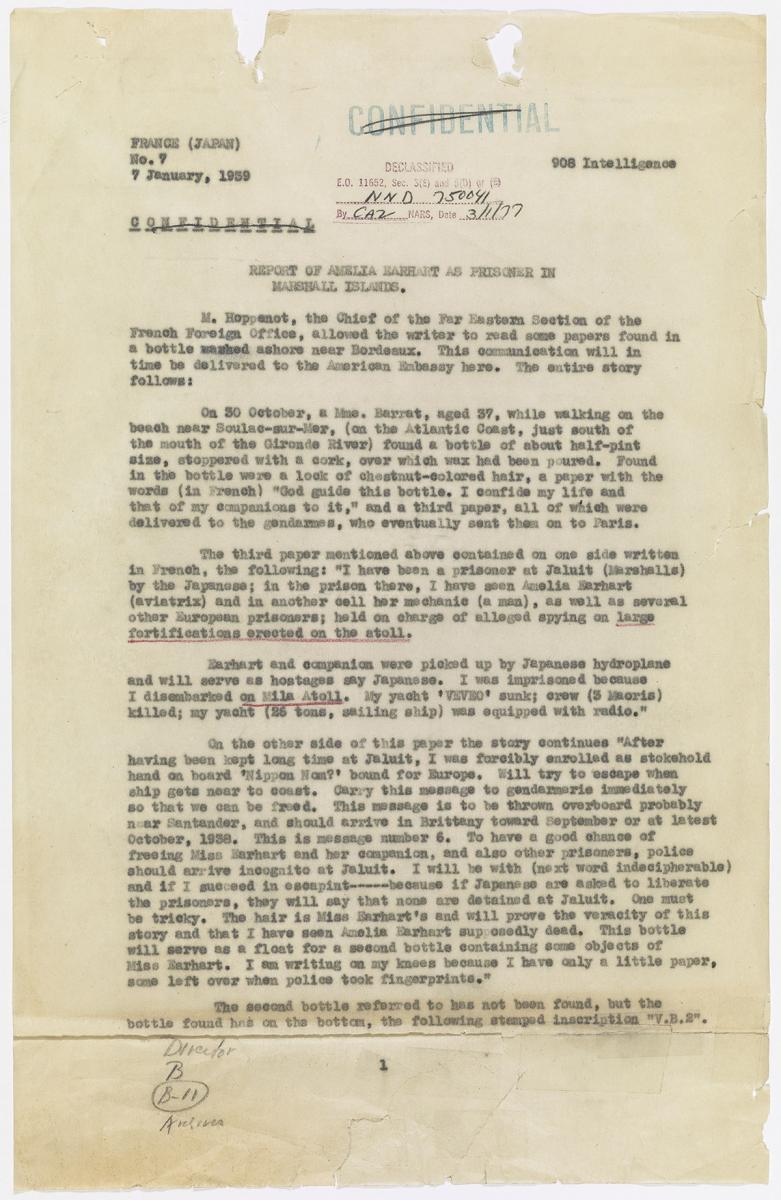 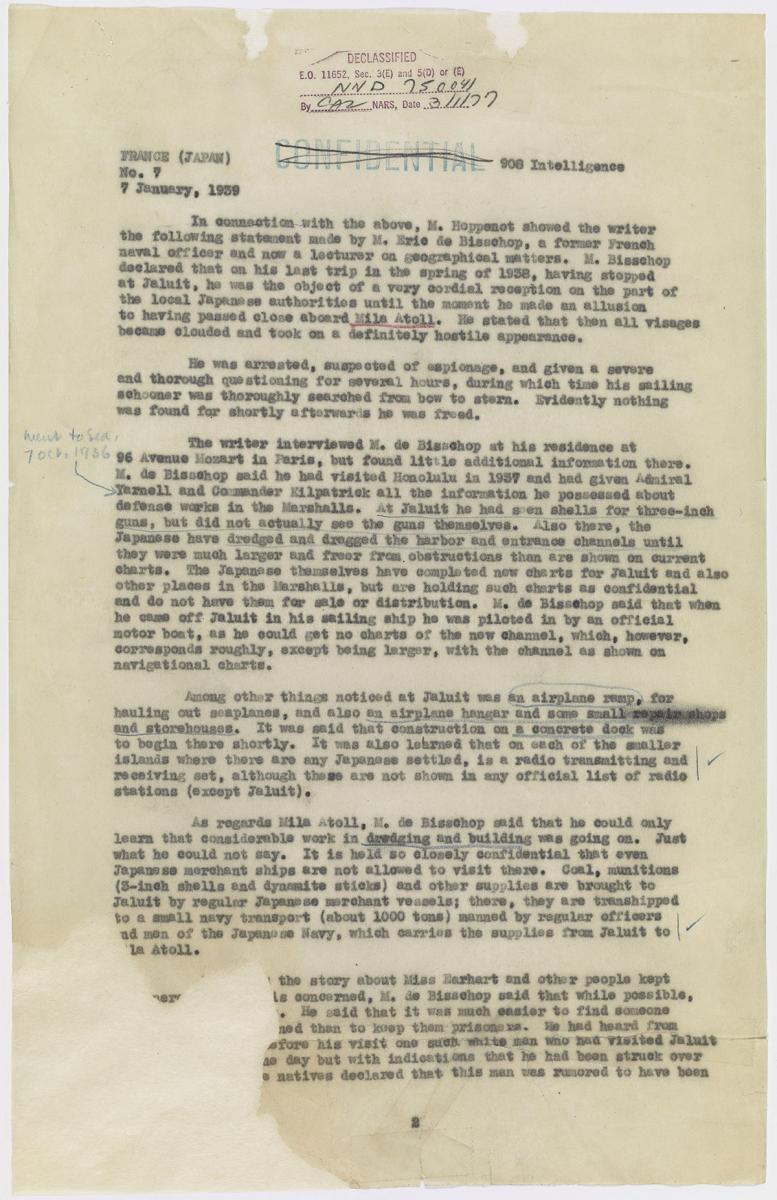 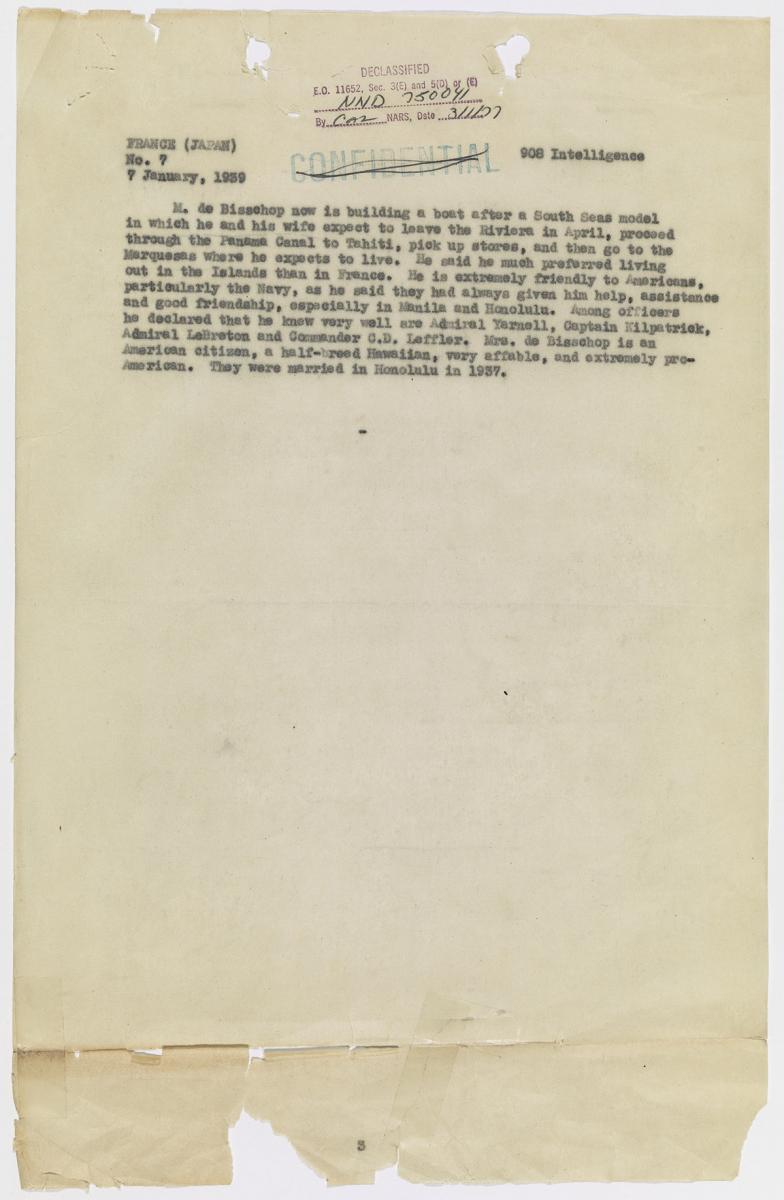 Explore other digital objects and descriptions in the National Archives Catalog.

The lists below provide more detailed descriptions of records in the National Archives in Washington, DC, College Park, MD, and San Francisco, CA.

National Archives in Washington, DC, and at College Park, MD

The list indicates records held in Washington with [DC] and in College Park with [CP]. Please note the location if you are requesting information about ordering copies.

Records of the Bureau of Naval Personnel, Record Group 24 [DC]

Includes the deck logs of the USS Colorado, Ontario, and Swan, vessels engaged in the search for the lost Earhart plane in the vicinity of the Howland and Phoenix Islands during the period July 1-19, 1937. The total number of pages of log entries for the period of the search is 71.

1.  Cruise report of the Itasca for the period during which it was searching for Amelia Earhart, together with a letter and two cables. 14 pages.

2.  Track chart showing the area searched by the Itasca. 1 page.

2.  Copies of cables and radiograms, February-April and June-July 1937, relating to preparations for the flight and to the search for the plane.  159 pages.

4.  Copy of the communications log of the Itasca. 43 pages.

5.  Photographs of Amelia Earhart, the plane, and related subjects. 26 items.

Includes a 25-page file of correspondence and newspaper clippings relating to the proposed Earhart flight and the search for the plane. File Designation – A4-3; Box 22.  General Correspondence.

Records of the Office of the Chief of Naval Operations, (Record Group 38) [CP & DC]

Includes a file on Amelia Earhart among the general correspondence of the Office of Naval Intelligence. This file consists of 170 pages of correspondence and reports relating to the flight of Amelia Earhart but also includes a report, dated January 7, 1939, on information that Earhart was a prisoner in the Marshall Islands. Entry 81, General Correspondence, 1929-1942, File A4-3/Earhart, Box #70 [DC]

General Records of the Department of Commerce (Record Group 40) [CP]

General Records of the Department of State (Record Group 59) [CP]

Decimal File 124.023/33: Documents dated August 8, 1932, concerning an advertisement in the Keystone, a jewelry trade magazine, in which Earhart endorsed a Swiss-made watch in a letter written on American Embassy stationery. 5 pages.

Decimal File 093.115/111: Citation dated July 23, 1937, including a replica of a medal presented to Earhart at the Gimbel Brothers Banquet in Philadelphia, honoring her as "Woman of the Year for 1932," and cover letter to the Secretary of State with acknowledgement. The medal replica is bronze, 15/16 inches in diameter, inscribed "Amelia Earhart, First Woman in the World to Fly Alone Across the Atlantic Ocean." 2 pages.

Decimal File 862i.01/333: Letter dated June 17, 1939, from Senator Gerald P. Nye to the Secretary of State, and the reply. Nye's letter concerns allegations in an Australian weekly that the search for Earhart was used as a cover for espionage against Japanese possessions in the Pacific. There is a reply from the Secretary of State denying the story. A photographic copy of the newspaper articles is included. 9 pages.

Decimal File 800.79611 PUTNAM, AMELIA EARHART/1-212: File dated June 1936-May 1940 concerning Earhart's flight around the world.  Many of the documents are despatches and instructions relating to clearance for her flight from countries over which she proposed to fly.  Some material concerns her disappearance and the subsequent search for some trace of her or her aircraft.  Also includes unverified reports of her whereabouts. 364 pages. There is also a 19-page index to this file.

General Records of the Department of the Navy, (Record Group 80) [DC]

Records of the Office of the Adjutant General, (Record Group 94) – Army Records [DC]

Includes an 81 page file relating to the Trans-Pacific and round-the-world flight of Amelia Earhart.

Records of the Office of Territories (Record Group 126) [CP]

Includes 17 pages concerning Amelia Earhart among several files of the Military Intelligence Division. These consist of a 10 page summary of her flight, several reports concerning her goodwill flight to Mexico in 1935, and two letters dated July 8, 1937, and November 1, 1939, from civilians who claimed to have received messages from Earhart.

Papers donated by Leo G. Bellart, a crew member of the Itasca:

2.  Newspaper clippings relating to the search for Amelia Earhart. 20 pages.

Include among the records of the Air Officer, Hawaiian Department, the proceedings of a board of officers to investigate the crash of Amelia Earhart at Luke Field on March 20, 1937, and a report, dated July 27, 1937, on the search for her plane. The proceedings total 56 pages and the report 10 pages.

[Earhart Search Chart] [Same as above some corrections] (2 ft. long) 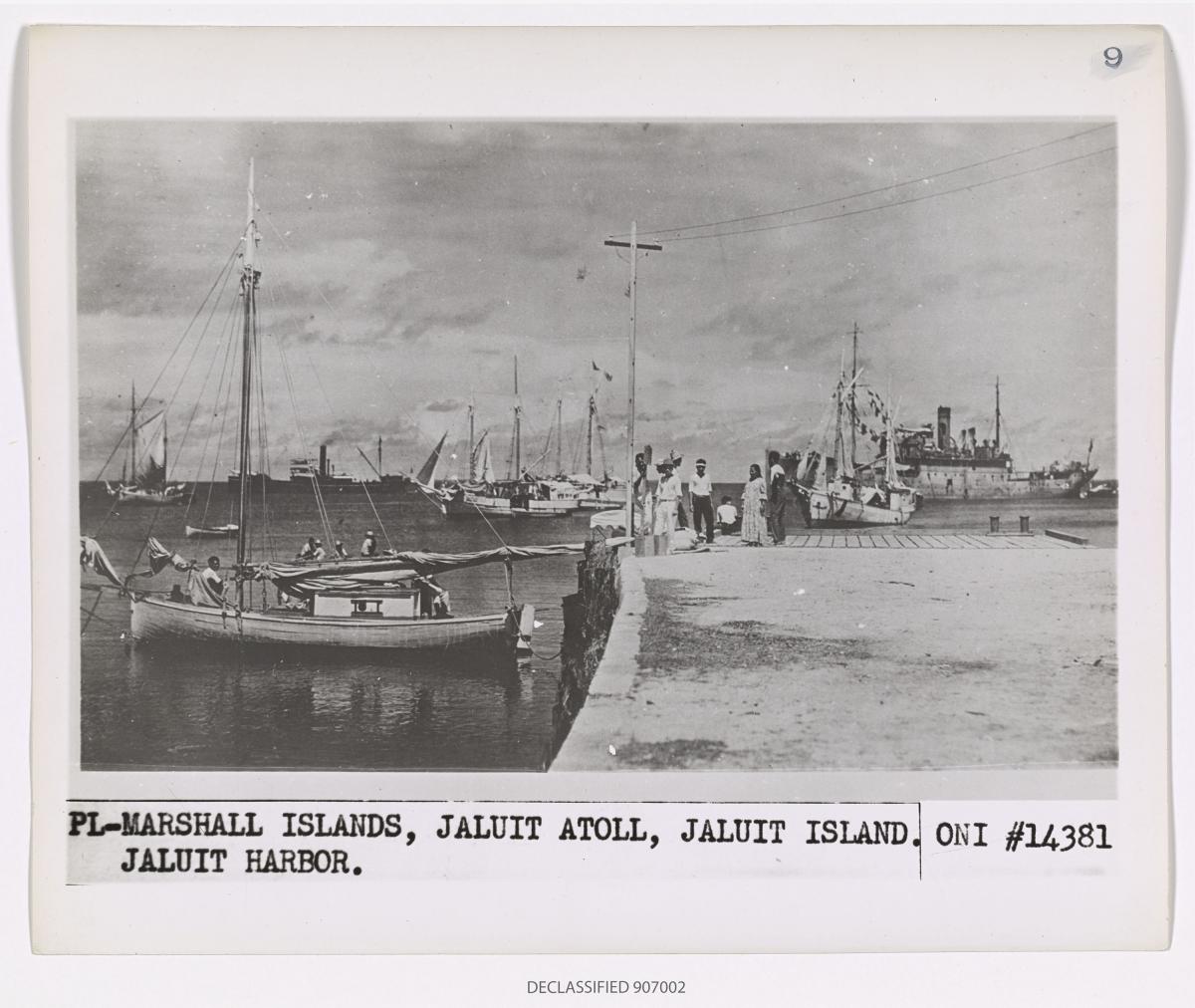 News reports and a television documentary in July 2017 suggested that this image, part of the National Archives' holdings, may show missing pilot Amelia Earhart and her navigator Frederick Noonan on the Marshall Islands after her disappearance over the Pacific Ocean on July 2, 1937. The National Archives' mission is to preserve and provide access to the historical records. We encourage you to review the records in order to form your opinions.

Read about finding the radio log of the last transmissions received from Earhart's plane. (NAID 6210628) 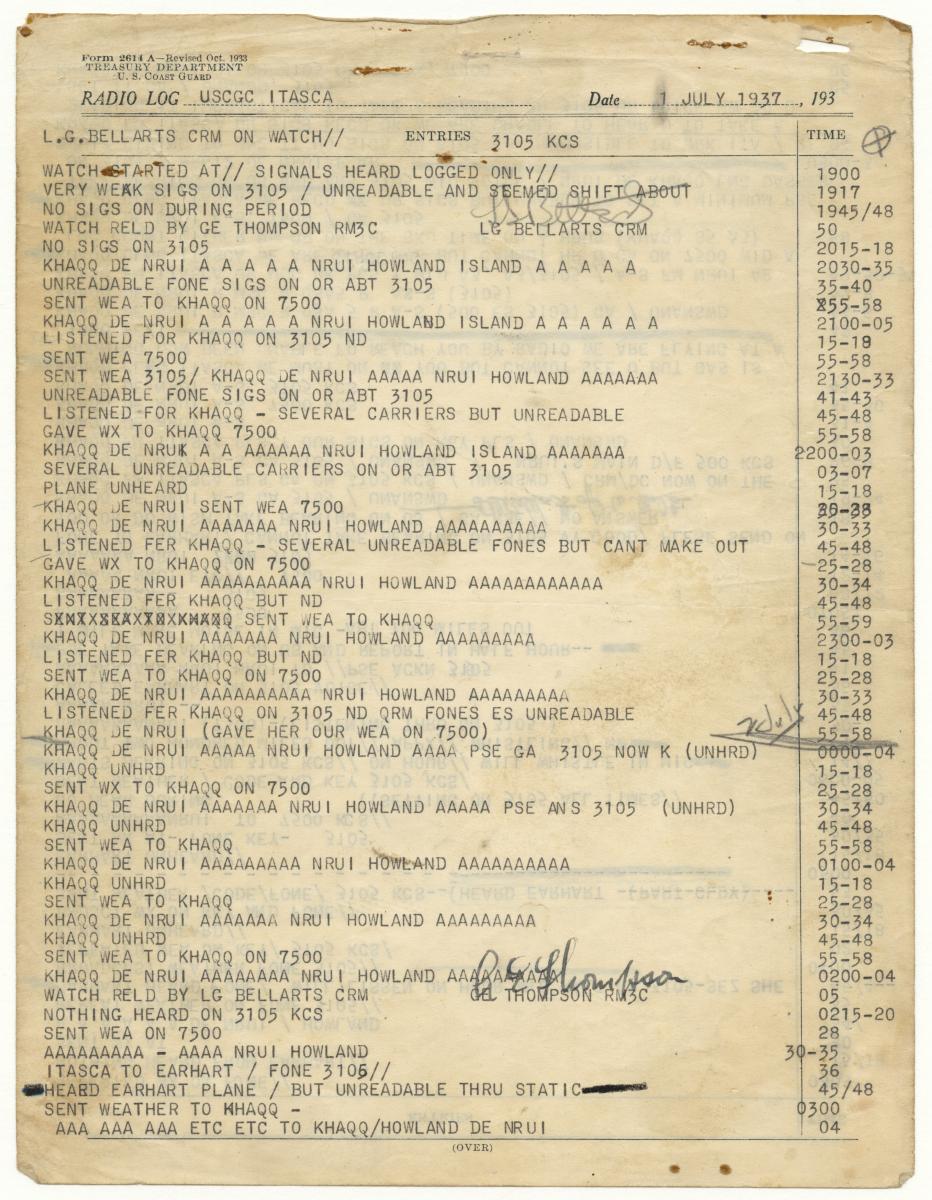 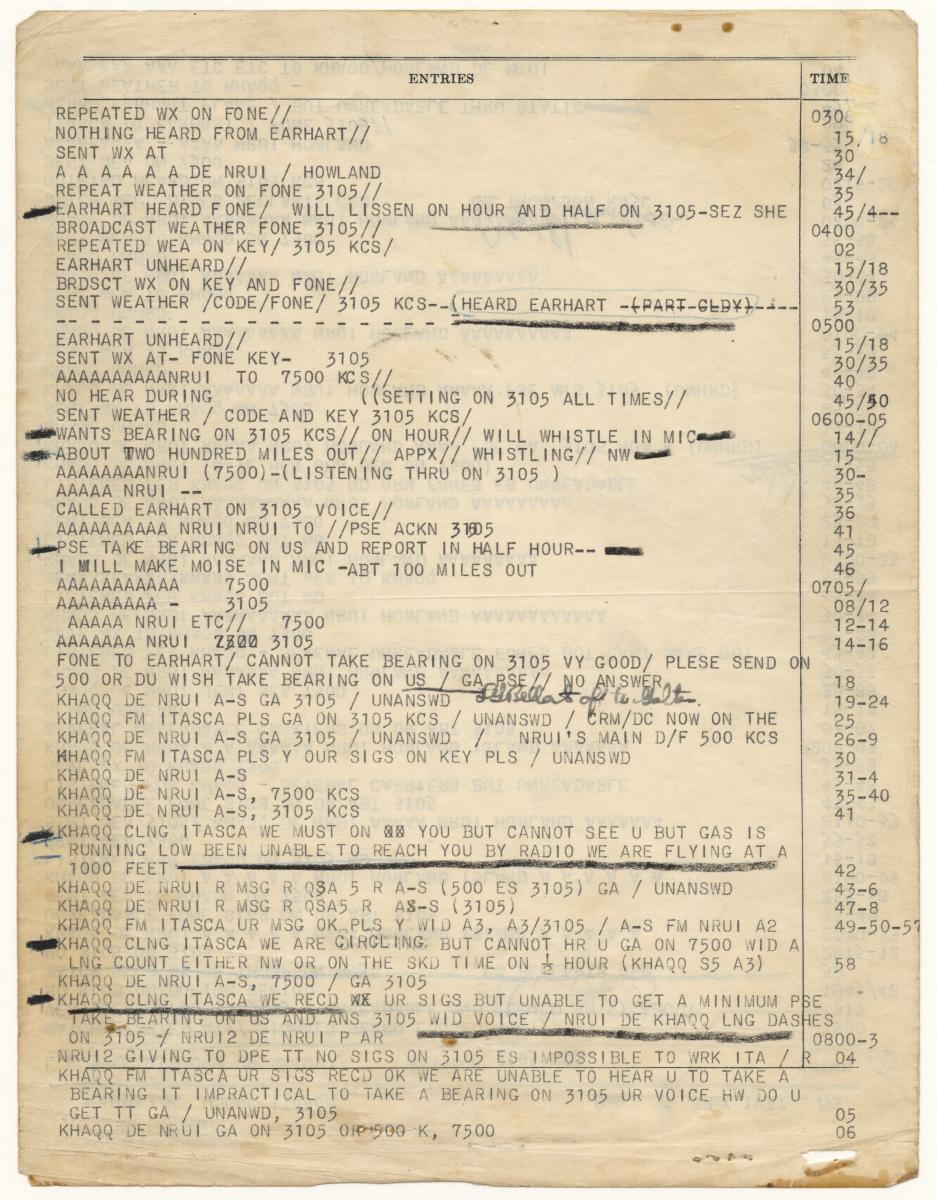 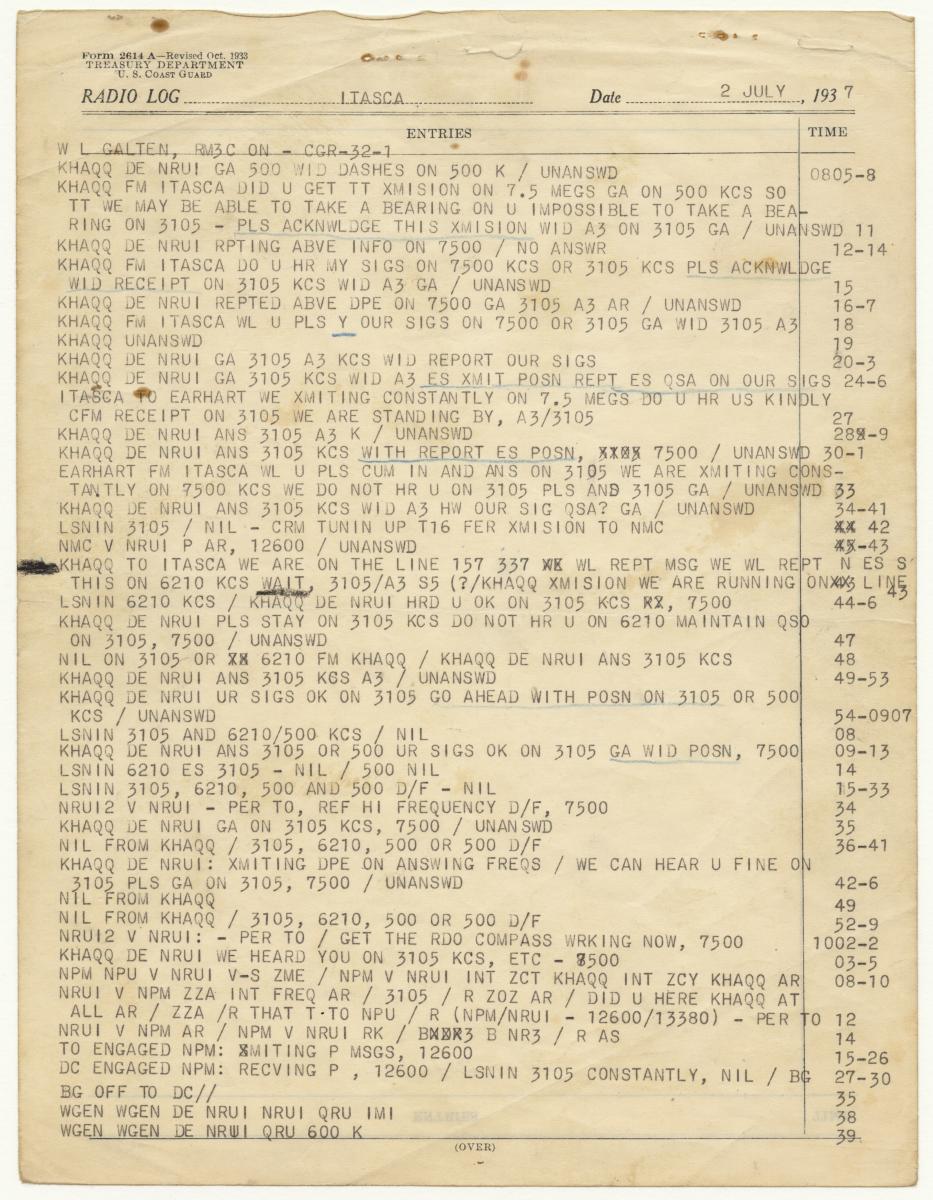 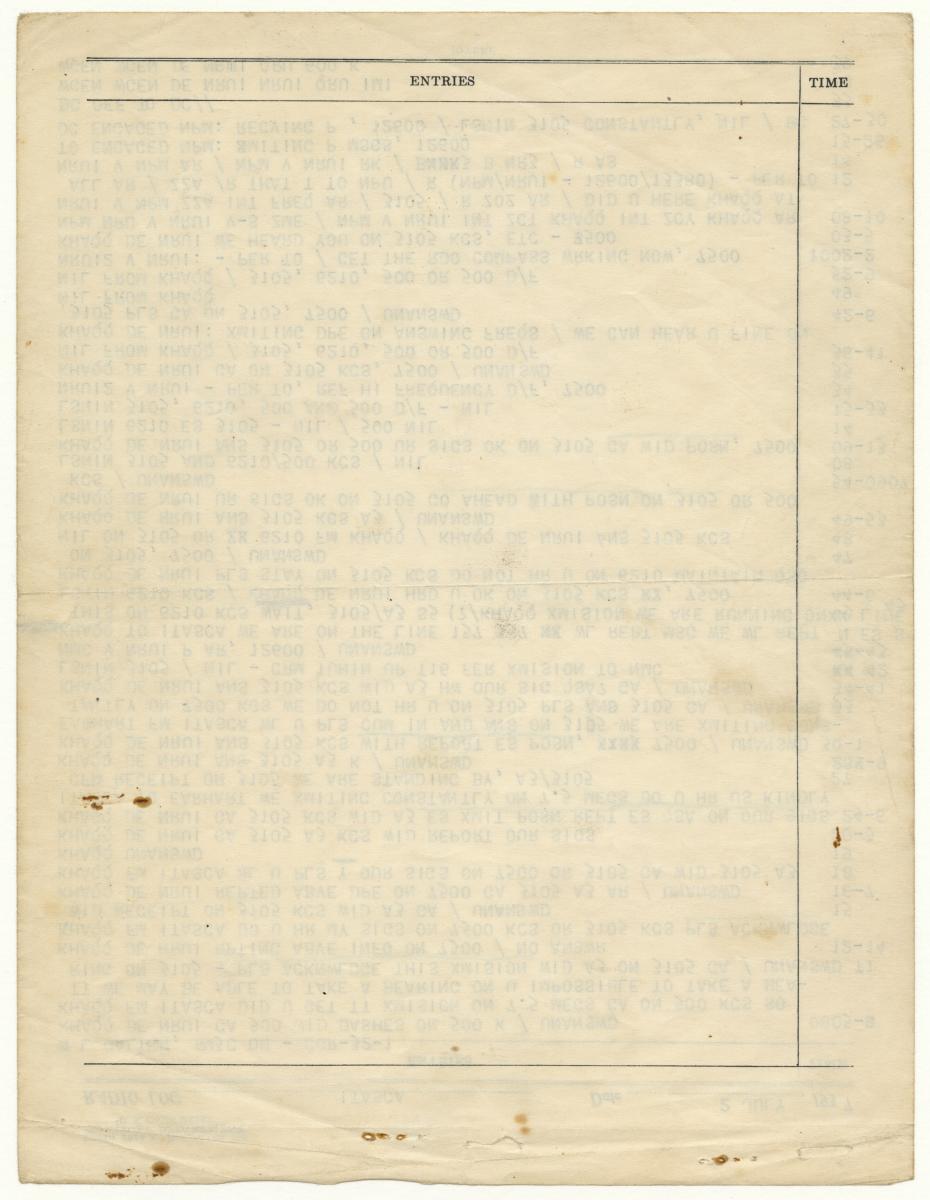 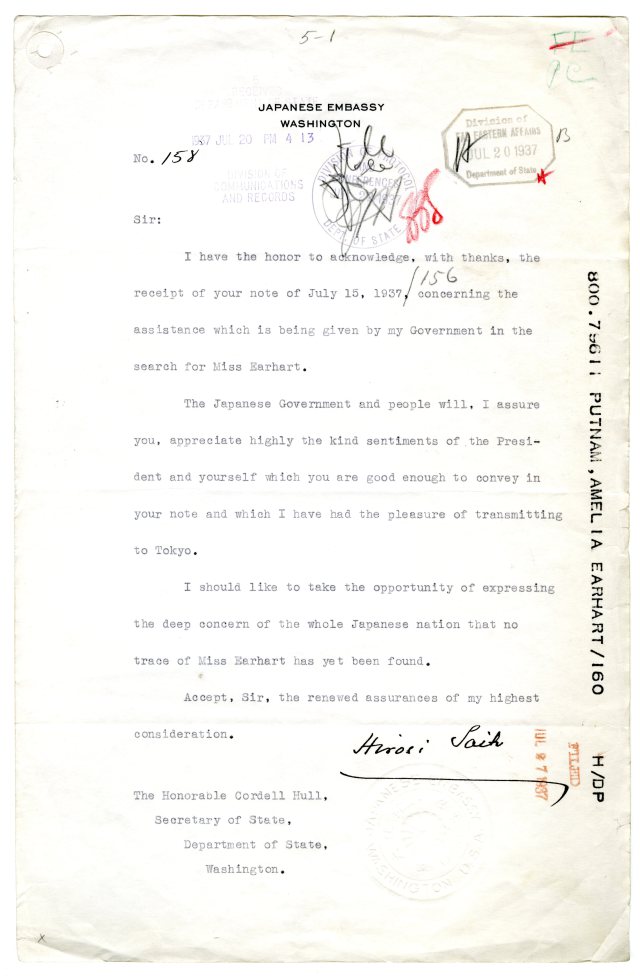