Washington, July 10, 2017— There are only two known in the world—parchment manuscripts of the Declaration of Independence dating back to the 18th century. One is held by the National Archives and displayed to the public in Washington, DC. The other was recently discovered in Chichester, England, by two Harvard University historians, who spoke about their discovery at the National Archives last week.

Danielle Allen and Emily Sneff came across the “Sussex Declaration,” as it has come to be known, in August 2015, while conducting online research of the digitized records collection of the United Kingdom National Archives for Harvard’s Declarations Resource Project.

Sneff said their sleuthing has located more than 500 versions of the Declaration, in formats such as broadsides, newspapers, manuscripts, and books—including 156 copies produced from 1776 to 1800 in the U.S. alone. Their discovery, however, is the only other known 24” x 30” parchment manuscript copy, besides the original held by the National Archives.

While looking through the digital collection from the West Sussex Records Office, available through the United Kingdom National Archives, Sneff stumbled across the “Manuscript copy, on parchment of Declaration in Congress of the 13 United States.”

Sneff explained that she knew she found something unique based on the “manuscript on parchment” description, but she wasn’t sure it was anything more than a reproduction. “We tried not to get too excited at first, until we did a more thorough investigation,” Allen added.  Over the next two years, Allen and Sneff carefully investigated all clues revealed through the document and amassed a vast body of evidence. 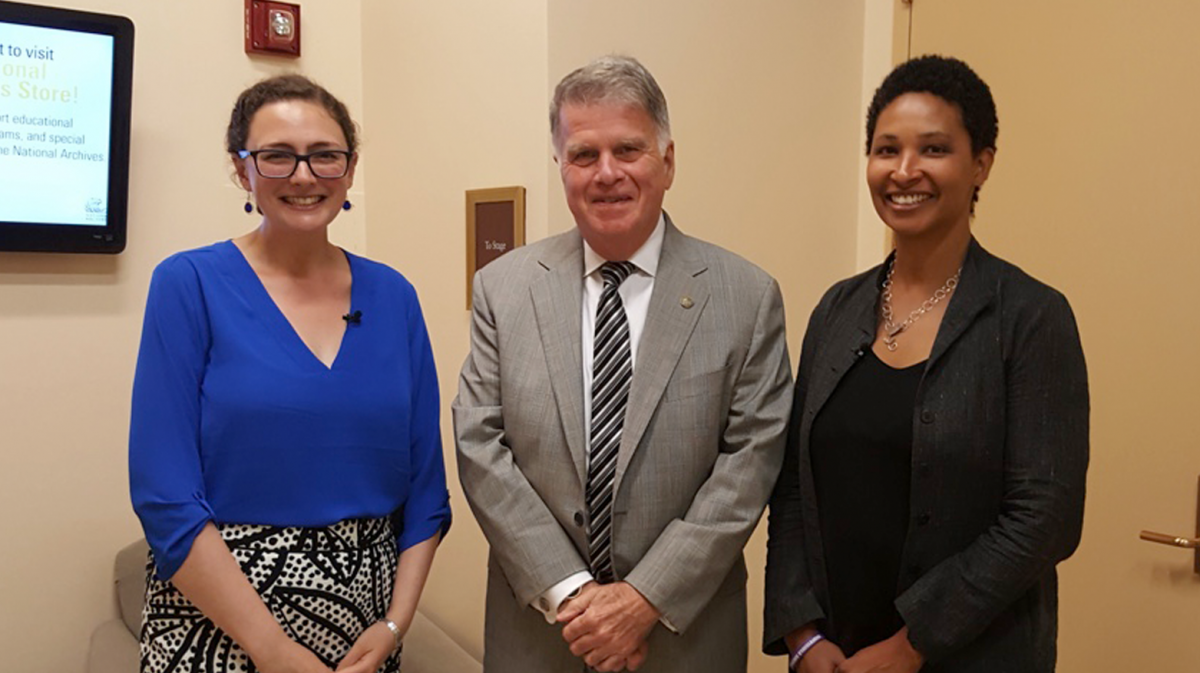 The team concluded that the parchment manuscript likely dates back to the 1780s and was produced in Philadelphia or New York, based on material evidence.

It was actually Allen’s mother, Susan Allen, former associate director and chief librarian of the Getty Research Institute, who discovered holes in the corners of the document that were likely made from pre-industrial nails. This detail helped in both dating the document and determining its purpose. The historians explained that they feel confident that the nail holes indicate that the document was meant for public display.

They believe that James Wilson, a founding father and Federalist who resided in Philadelphia, likely commissioned the “Sussex Declaration.”  According to Allen, history has documented Wilson’s belief in a strong centralized government that represented the people not states, which could explain the different order of signatures at the bottom of the Sussex document.

“One of the most notable features of the Sussex Declaration is the arrangement of signatures,” Allen said. “They are not arranged by state delegation as they are on the Matlack Declaration and all other early versions. However, both manuscripts do have all 56 names, simply in a different order, which is significant.”

“Although the state order had already been somewhat obscured in the Matlack Declaration using a right to left order and without the use of state labels,” Allen said, “this jumbled order in the Sussex Declaration could reflect Wilson’s notion that the nation was founded by a single united people not by states.”

Sneff said the names themselves are one of the most remarkable characteristics of this document.

“Several names are misspelled, which could only be achieved if the names were copied from signatures,” Sneff said. “This means that the source text for the Sussex Declaration had to be the Matlack Declaration or another copy that replicates the signatures and such copies did not exist until the 19th century.” 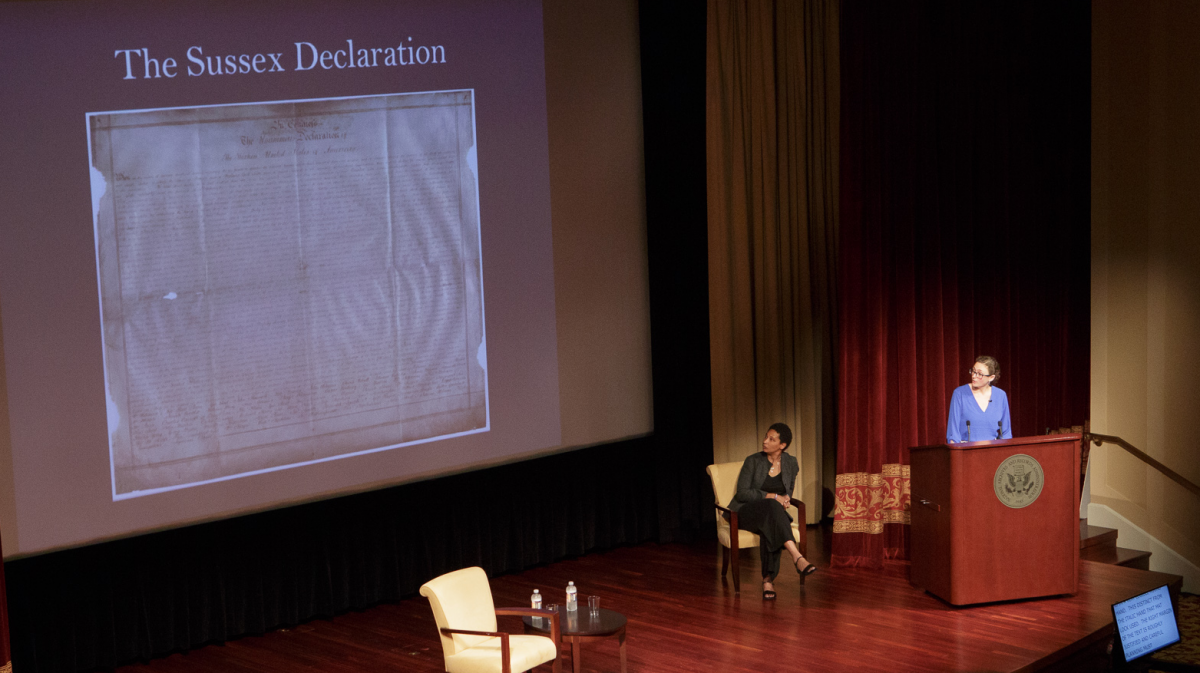 Emily Sneff and Danielle Allen share their hypotheses about the origin and purpose of the newly discovered "Sussex Declaration." (Jeff Reed, National Archives)

Allen said that the arrangement of signatures provided valuable clues and acted as a good starting point as they investigated the document’s origin and purpose. It ultimately provided a path to Wilson, his beliefs, the hypothesis that he was indeed the commissioner of the legal document.

In addition, the historians publicly revealed for the first time during the National Archives’ presentation their theory on how the document reached Britain in the first place. Through a massive amount of research, which Allen emphasizes is still a work in progress, they believe that links among James Wilson, Thomas Paine, and the 3rd Duke of Richmond form the most plausible connection.

The 3rd Duke of Richmond, Charles Lennox, was nicknamed the “Radical Duke” because he was known to sympathize with the 13 colonies and the American Revolution. Thomas Paine—who lived in Lewes, Sussex before migrating to America—worked under the administration of the Duke of Richmond and moved in similar political circles. Paine worked alongside Wilson on behalf of the Bank of North America.

“It was in that relationship that we believe there may have been a movement of the parchment manuscript in Philadelphia from Wilson through Paine to the Duke of Richmond,” the historians stated. In addition, they noted Paine’s well-documented role as a courier who connected politicians in America to those who sympathized with the cause in England and France. They also cited Paine’s many social connections to other political radicals in England and France as well as relatives of the Duke of Richmond.

“There’s still a lot more research to do, but this story between Paine and Richmond has come to light as a result of the discovery of this document as we continue to investigate how it found its way to England,” Allen said.

Allen further explained that the document was deposited in the West Sussex Records Office by Leslie Holden in 1956. Holden’s personal journals revealed his discovery of the documents in his employer’s holdings—a solicitor’s office. As the historians uncovered more information, they discovered that the Sussex Declaration was likely deposited at the same time as a plethora of documents from other clients of that same legal firm—including the Dukes of Richmond—thus establishing another very plausible connection.

The document was stored folded in quarters among records in the West Sussex Records office. Aside from the folds, Sneff said “the document is in very good condition, with some minimal rodent damage, and it is very legible.”

And in a reference to the infamous storyline in the movie National Treasure, Sneff assured “there nothing hidden on the back of this parchment.”

The document is currently housed where it was discovered at the West Sussex Record Office in Chichester, England. Officials there are working to ensure its proper preservation and care now that they know the valuable item within their possession.

Allen, author of Our Declaration: A Reading of the Declaration of Independence in Defense of Equality, has a passion for the Declaration. While researching her book, she raised a question about punctuation in the National Archives’ official online transcript of the document. According to Allen, a period that appears right after the phrase “life, liberty and the pursuit of happiness” changes the intent of the paragraph. Her interpretation has sparked scholarly debate on the topic.