Dr. Erin Mahan, representing the Department of Defense, has joined the Commission and will attend her first meeting in November. In April 2010, Dr. Mahan was appointed Chief Historian, and she previously served as associate research fellow, Center for the Study of Weapons of Mass Destruction at the National Defense University in Washington, D.C. She is also an adjunct research historian for the Miller Center of Public Affairs at the University of Virginia. Previously, she was Chief of the Division of Arms Control, Asia, and Africa in the Office of the Historian at the Department of State, where she edited several volumes in the Foreign Relations of the United States series related to Strategic Arms Limitation Talks, the former Soviet Union, and the Vietnam War. She is also the author of Kennedy, De Gaulle and Western Europe (Palgrave, 2002) and has published several chapters and articles on NATO, the Berlin Crisis, and U.S. and French foreign economic policies during the 1960s. She was recently a contributing staff writer of the Report of the Commission on the Prevention of Weapons of Mass Destruction Proliferation and Terrorism (GPO, 2008). She holds a Ph.D. from the University of Virginia.

Look for NHPRC staff members at the upcoming joint meeting of the Council of State Archivists, the Society of American Archivists and the National Association of Government Archives and Records Administrators in Washington, DC, August 10-15. We will have a booth in the conference exhibition hall, and we encourage you to stop by to discuss your project ideas as well as the results of previous NHPRC grants. Meeting attendance should exceed 1600 this year. More info at www.archivists.org/conference/.

On June 7, the House Oversight and Government Reform Committee's Subcommittee on Information Policy, Census and the National Archives held a hearing to consider reauthorization of the NHPRC. Chairman Clay has introduced legislation ( H.R. 1556) to reauthorize the NHPRC at a $20 million level through fiscal year 2015. On July 1, the Subcommittee passed the Bill during a business meeting. Simultaneous to the House actions, on July 12, the full Senate passed legislation ( S. 2872) to reauthorize the NHPRC at a $10 million level for fiscal years 2010-2014. Congress began its summer recess on July 31 and will return to Washington in mid September. It is expected that the full House will move forward with the NHPRC's funding reauthorization at that time.

The Special Collections and Archives (SC&A) department at George Mason University in Virginia houses nearly 11,000 linear feet of materials, including manuscript collections and the university's institutional records. Important collecting areas include cultural and political movements, government and public policy, the performing arts, photography and photojournalism, transportation, and planned communities. Through a grant from the NHPRC, the department is undertaking a project to arrange, describe, preserve, and promote the use of two of its collections of photographs of approximately 60,000 images that document important national political figures of the 20th century.

The photographs of Oliver F. Atkins (1917-1977) make up one of the largest and most heavily used personal manuscript collections at SC&A. The collection, which includes photographs, negatives, and contact sheets, contains about 57,000 images and documents the period of 1943-1974. Although two inventories exist for the collection, they no longer reflect its organization or condition.

After earning a degree in journalism, Atkins became a photojournalist. During World War II, Atkins served as a correspondent and photographer for the American Red Cross. Following the war, he became the Washington correspondent for the Saturday Evening Post. In 1969 Atkins became the personal photographer of Richard Nixon and chief White House photographer. His photographs of a meeting between Nixon and Elvis Presley on December 18, 1970, are his most famous images, but the collection also includes images of foreign and domestic politicians, the March on Washington in 1963, the 1968 Poor People's Campaign, congressional hearings on the activities of the Teamsters, presidential nominating conventions from 1952 through 1968, and scenes of American life. 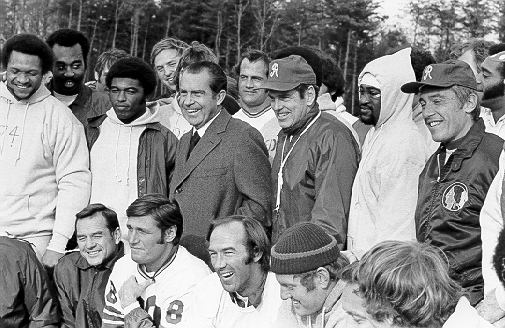 The photographs of Arthur E. Scott (1917-1976) make up a smaller collection, but they are of similar subject matter and their usage will likely increase once they are more accessible. After working as a photojournalist for twenty years, he became in 1955 the photographer for the Republican Senatorial Committee and remained in that position until becoming the official photo-historian for the U.S. Senate Historical Office. In that capacity, Scott sought to obtain a likeness of every individual who ever served in the Senate. The collection includes 3,500 photographs, negatives, and slides of the U.S. Capitol and the surrounding area, members of the Senate, presidents and vice-presidents, street scenes from the 1930s, Supreme Court justices and the Supreme Court Building in the 1930s, natural disasters, and visits by theater and film celebrities. 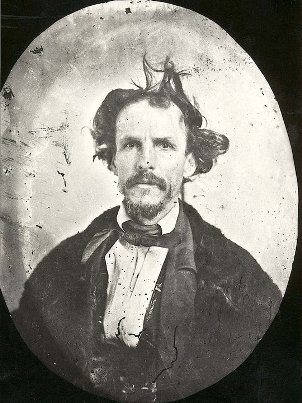 Enlarge
James Henry Lane (1814-1866) Lane was a leader of the abolitionist movement during the turbulent period before Kansas Territory was admitted to the Union as a free state in 1861 and served as the state s first U. S. Senator.

A grant from the NHPRC is supporting a two-year project to create or verify high-level content information for the Kansas State Historical Society's holdings of 42,000 cubic feet of records and 20,000 rolls of microfilm.

One of the core goals of the project is to eliminate current backlogs. After entering all currently available descriptive information into a new database, project archivists began to survey the collections and create or update basic descriptive information. Records needing preservation attention are indentified, and new processing procedures will be put in place to prevent any future backlogs.

Holdings document many topics--from missionaries' and Indian agencies' attempts to "civilize" Native peoples on the Plains and the territorial "Bleeding Kansas" era, a precursor of the Civil War-to the modern period. Topics and descriptions reflect the broader American experience and include Native Americans, homesteading, agriculture, land distribution, railroads, the military, immigrant colonies, and social reform.

Some of the more remarkable parts of the collection can be found at Kansas Memory, an archives of primary source materials accessible online. Users can browse records by county or dozens of thematic categories.

At the Smithsonian American Art Museum, a new exhibition opened in July featuring one of America's favorite storytellers. Norman Rockwell: Telling Stories is the first major exhibition to explore in-depth the connections between Norman Rockwell's iconic images of American life and the movies. Two of America's best-known modern filmmakers-George Lucas and Steven Spielberg-recognized a kindred spirit in Rockwell and formed significant collections of his work. Rockwell's paintings and the films of Lucas and Spielberg evoke love of country, small town values, children growing up, unlikely heroes, acts of imagination and life's ironies.

While the Smithsonian exhibition is primarily drawn from private collections, the Norman Rockwell Museum in Stockbridge, Massachusetts is the principal steward of the art and archives of the artist Norman Rockwell (1894-1978), who bequeathed his personal art collection to the museum along with his last working studio and its contents. 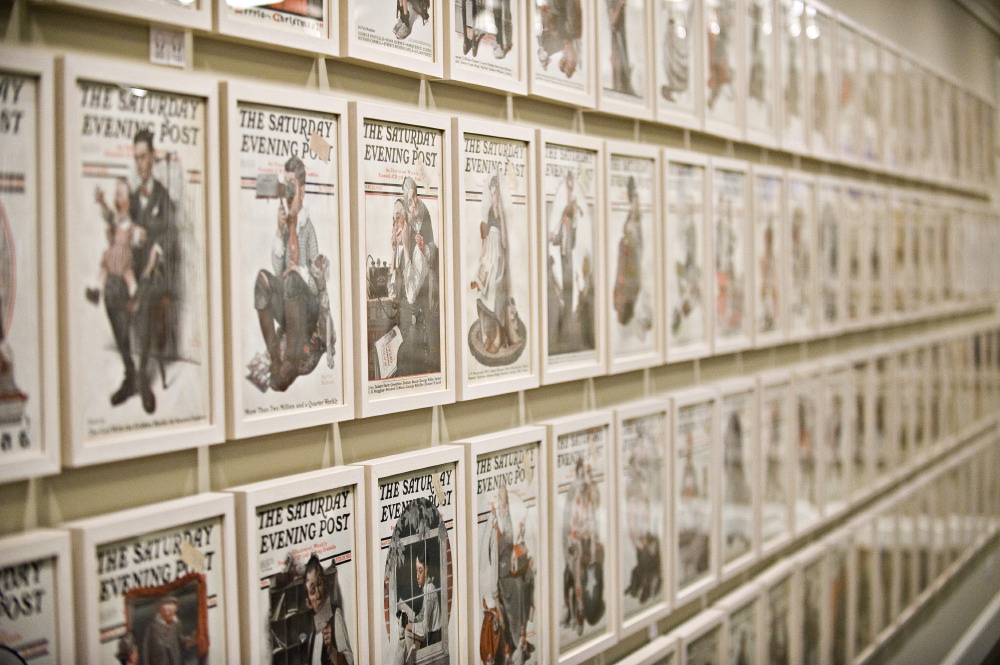 The museum houses 725 original Rockwell artworks and 823 cubic feet of archives. The Rockwell Archives consists of approximately 50 collections, including the artist's business correspondence, ledgers, and personal correspondence, including fan mail. The archive also includes all published source material that Rockwell referenced and notated when creating his art, along with over 18,000 photographs, negatives, slides and film, and over 100 audio recordings dating from 1946. The archives also houses other American artists' materials, including the papers of Al Parker, Thomas Lovell, and the Famous Artist School.

A grant from the NHPRC will enable the Museum to undertake a two-year project to reorganize, process, and make available approximately 725 cubic feet of material from the Rockwell Archives. The Norman Rockwell Museum at Stockbridge celebrates the history of American illustration.

Enlarge
Visitors at the Norman Rockwell Museum in Stockbridge, Massachusetts.

A Couple of Updates

In the June issue of the News, we featured stories on the John Jay papers and the Connecticut Historical Society processing project. You may be interested in following John Jay in his blog and in Connecticut History Society's Barbara Austen's wonderful essay "Speed Reading in the Archives" in Common Place.

Send us your news, and we will feature exemplary projects here and at our Facebook page at www.facebook.com/nhprc.