At a policy meeting held in mid-February, the National Historical Publications and Records Commission made several decisions that will affect future programs and policy.

Funding for FY 2011 is still undecided as of March 11, 2011. It will likely be between $4 million and $9 million, subject to the conference negotiation between the House of Represenatives ad the Senate. For FY 2012, the President has proposed a budget of $5 million.

President Barack Obama honored 20 artists, scholars and writers on March 2 in a salute to the arts and humanities. Stan Katz, who serves on the Commission as a representative from the American Historical Association, was one of the recipients of the National Humanities Medal at The White House, joining such stalwarts as Daniel Aaron, Bernard Bailyn, Jacques Barzun, Wendell E. Berry, Roberto Gonzalez Echevarría, Joyce Carol Oates, Arnold Rampersad, Philip Roth, Gordon Wood, and 10 artists.

The Founding Fathers Advisory Commission is a deliberative body to advise the Archivist of the United States on the progress of the Founding Fathers editorial projects funded by the National Historical Publications and Records Commission, a part of the National Archives. Its purview includes, but is not limited to, advising and making recommendations to the Archivist on issues related to the goals and completion of the projects, their funding sources, and their performance and productivity. The Founding Fathers Advisory Committee met on December 13, 2010 in Washington, DC, and information from that meeting is now online at www.archives.gov/committees/founding-fathers/.

A Day in the Life (or Where Digging Will Get You)

The Autry National Center’s libraries, the Braun Research Library and the Autry Library, hold one of the nation’s most comprehensive collections on Native American cultures and the history of the American West. Through a grant from the NHPRC, the Autry National Center for the American West has set out to process approximately 2,000 linear feet of archival material over the next two years. Once each month, the Autry Libraries blog will feature collection gems brought to light by NHRPC Processing Archivist Holly Larson.

It's a typical day in the archive at the Braun Research Library. I'm working with 100-year-old newspaper and historic cyanotypes and creating inventories and finding aids so that researchers can come use the collections. I opened up a drawer, and found what looks to be an original parchment certificate: a land grant from the United States government to James Taylor, assignee of William Taylor, for seven years of Taylor's voluntary service in the U.S. Military. The document is dated 1807 and is signed by Thomas Jefferson and his Secretary of State (and successor as President), James Madison.

If you're not familiar with the internal operations of an archive, here is a little background on this discovery. The Braun Research Library has seen many custodians and there is an enormous amount of gifts and donations. Collection processing backlogs are a regular occurrence in archives worldwide, which is why there are new practices in archival processing with the goal of getting more information to the public faster (thus, my grant-funded position). These collections can be anything from one item, such as this document, to hundreds of linear feet of letters, certificates, and financial records.

As I have been tending to the processing backlog at the Braun Research Library, I discovered the Thomas Jefferson document. The only custodial information with the document was a note that it was a gift from Mrs. Mary Thomasset in 1957. So the hunt was on to find existing information regarding the history and provenance of the item, more details about the donor, or any cataloging of the item in our institutional records. Our first step was to search our digital database, but the search came up empty. There was no record of this document in the database.

Next step, check the gift index, a "card catalog of donors" from that era in the Braun Research Library's history. Sadly, although there are thousands of cards, there was no card for our donor. Continuing the treasure hunt, we checked in our registrar's records for any information about this collection, and again meet with no success. The accessions binder, a record of all incoming collections during that era, was our next stop. Again, we came up empty-handed. Kim Walters, Director of the Braun Research Library, who has been at the library for 20 years, suggested the manuscript file, and we finally found a hint. The MS 559 card from the Manuscript card idex.

Of course, it doesn't tell us anything we don't already know, but at least we've tracked down a little bit of record-keeping. And, we have a bit more information, a discrepancy in the first name of the donor (Mary on the back of the parchment document versus Macy on this index card). Sometimes, in the archive world, those discrepancies are helpful in finding more information, and sometimes, that's all the information you can ask for. Now that we've insured that we have all of the institutional information we possess for the item at hand, we can begin the process of cataloging and documenting the item, so that researchers may access it. Solving mysteries in the archive is all in a day's work. And sometimes, we're lucky enough to touch a piece of history like this. 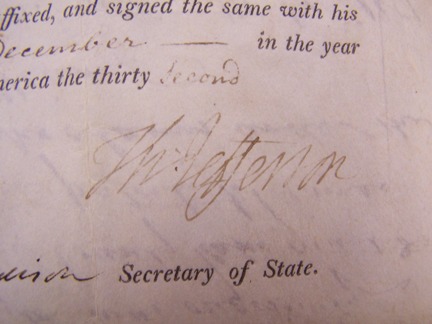 Salvaging the Records of Baltimore City The City of Baltimore has had varying degrees of success in its efforts to maintain a viable archival program for the care of its records. During the 1970s and 1980s, efforts to process collections and create finding aids were extremely successful. NHPRC grants in 1979 and 1981 contributed to this level of success. Unfortunately, by the mid-1980s, declining city resources resulted in a deterioration of the city's archival program. From 1986 through 2008, city records were housed in a factory with no climate controls and a leaky roof. Recently, the city has been increasing the resources available to its archival program, and in January 2009, city records were moved to a building with a more stable environment and a roof that does not leak.

Although the city has improved its commitment to its archival program, it continues to lack sufficient professional, technical, and administrative resources for a project such as that being proposed. In 2009, an Intergovernmental Agreement was signed by the City of Baltimore and the Maryland State Archives. Under this five-year agreement, the state archives will provide advanced technical and professional resources to the city.

The records of the City of Baltimore (33,144 cubic feet, 1729-present) primarily document the activities of the municipal government and include correspondence, minutes, financial material, legal documents, publications, reports, and working papers. Recently, the city's records have been used for research relating to housing projects, the lives of free blacks in the 19th century, the development of almshouses and hospitals, the creation of public spaces and monuments, migration, the Baltimore and Ohio Railroad, and public markets. 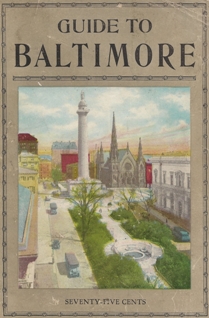 In 1984, a guide to the city's records was created which provides researchers with information about all of the record groups housed at the city archives and descriptive information about each record series within each record group. The basic descriptions in this guide, as well as other information available about the records, will serve as the basis for the creation of enhanced descriptions of the records. At the start of the project, technical staff will make adjustments to the state archives' Archives of Maryland (AOM) records management system and the online "Guide to Government Records" so that they are compatible with the city's records structure. AOM allows archivists to perform all required records management functions, including identifying future transfers, assigning storage locations, describing record series and individual documents, listing access restrictions, and identifying conservation needs. The "Guide to Government Records" provides intellectual control over all of the records created by state government entities. This guide will serve as the model for the "Baltimore City Government Records Guide" to be created during the project.

The Baltimore project is but one of many project supported by the NHPRC over the years that look at the critical question of municipal or local government archives. Since 1976, the NHPRC has funded nearly projects in five dozen cities and towns to create or significantly update their local government archives-from Orange County, California to Boston, Massachusetts, from rural Troup County Georgia to Polk County, Iowa.

Learn more about the Baltimore project at http://baltimorecityhistory.net/ .

In July 2010, Luther College in partnership with Vesterheim Norwegian-American Museum, both located in Decorah, Iowa, received a grant from the NHPRC to pursue cataloging and making accessible around 2,500 feet of materials. These archival collections document the history of Norwegian-Americans across the Northeast Iowa region from as early as the 1800's to the present. You can follow the progress at Journeys to America blog at Luther College. The Vesterheim Norwegian-American Museum, founded in 1877, cares for 24,000 artifacts, a library collection of 12,000 volumes, and an archive containing 578 photograph and manuscript collections . The manuscript and photograph holdings date from the mid-1600s to the present. Currently none of these collections appears online.

The materials contained in the Luther College Archives and the Vesterheim Norwegian-American Museum document the history and culture of emigrants from Norway to the United States, their descendants, the Norwegian Lutheran Church in America, and the founding of Luther College. The collections include photographs, diaries, letters, sermons, organization records, records from early Norwegian-American educational institutions, church records, and audio and video recordings.

The work plan for the funded project entails the creation of a searchable, online catalog where researchers from around the world may access the Norwegian-American collections from both institutions. The methodology includes the use of appropriate Describing Archives: A Content Standard (DACS) descriptive standards and adding the newly-created descriptive entries into a database using the Archon software. For the Vesterheim Museum collections, staff will create new collection level descriptions for all 578 manuscript and photograph collections. The Journeys to America blog will document the process, not only for the project's internal benefit, but also to help those who are interested in or implementing a similar project.

The end result will be a comprehensive, searchable database of materials from both organizations that will be available in both English and Norwegian. Additionally, the project will create important finding aids for collections at Luther College and Vesterheim Museum and various access points into their collections by allowing web search engines to discover these holdings.

After complete implementation, it is hoped that other Norwegian-American repositories will join the database in order to create a comprehensive, one-stop resource for students, genealogists, and researchers from around the world. This project is intended to add to the breadth of scholarship in the field of Norwegian-American studies and improve scholarship in emigration studies as a whole.