The final FY 2011 budget was recently set, and the National Historical Publications and Records Commission appropriations were $7 million, with a further rescission of 0.2 percent, leaving a total of $6.986 million. Our FY 2010 budget was $13 million (with $4.5 million earmarked for the Founding Fathers Online project). The current budget will force the Commission to make some difficult funding decisions at its meeting scheduled for June 1, 2011.

Edward Brynn Acting Director of the Office of the Historian , U. S. Department of State, has been named to the National Historical Publications and Records Commission. He fills a vacancy for the allotted position for a State Department representative.

Born in Pittsburgh in 1942, Edward Brynn graduated from the Georgetown School of Foreign Service in 1964. He received M.A. and Ph.D.degrees in British history from Stanford University, and M.Litt. and Ph.D. degrees in Irish politics from Trinity College Dublin. He has published two books and many scholarly articles on Ireland and the British Empire.

As an Air Force officer from 1968 to 1972, Mr. Brynn was Assistant and then Associate Professor of History at the United States Air Force Academy in Colorado Springs. He entered the Foreign Service in 1972. He was Chief of Mission in The Gambia and the Comoros Islands and Ambassador to Burkina Faso (1990-1993) and Ghana (1995-1998). 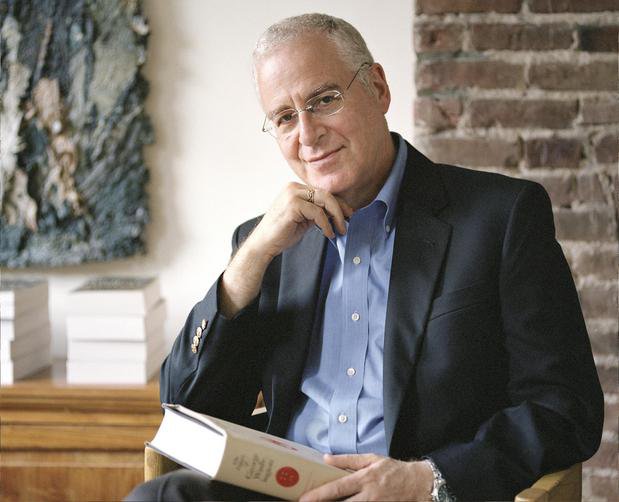 Enlarge
Ron Chernow, holding a volume of the Papers of George Washington

The 2011 Pulitzer Prize for Biography was awarded to Washington: A Life, by Ron Chernow (The Penguin Press), for its &qout;sweeping, authoritative portrait of an iconic leader learning to master his private feelings in order to fulfill his public duties." The biography also received the American History Book Prize from the New-York Historical Society.

Washington: A Life appeared in October 2010 to critical acclaim, arriving six years after his equally monumental biography of Alexander Hamilton. Both biographies were made possible only by virtue of the documentary editions of the primary source materials, projects funded by the NHPRC. Chernow credits the work of the editors on The Papers of George Washington, "I would have never been emboldened without the edition of the papers. It would have taken me a century to write without them. And in a sense, I am standing on the shoulders of a team of editors."

The modern edition, The Papers of George Washington, a grant-funded project, was established in 1968 at the University of Virginia, under the joint auspices of the University and the Mount Vernon Ladies' Association of the Union. Letters written to Washington as well as letters and documents written by him are being published in the complete edition that will consist of approximately ninety volumes, and the edition is now more than two-thirds complete. It builds on the thirty-nine volume edition by John C. Fitzpatrick published in the 1930s and early 1940s. "There are two major differences," Chernow says. "The earlier edition only contains the letters from Washington, but not to him. Reading it is sort of like eavesdropping on one end of a telephone conversation. The new edition not only follows both sides of the correspondence, but each document is lavishly annotated so that one gets extracts from contemporaries. I try to use eyewitness accounts, and those were often discovered through the footnotes." 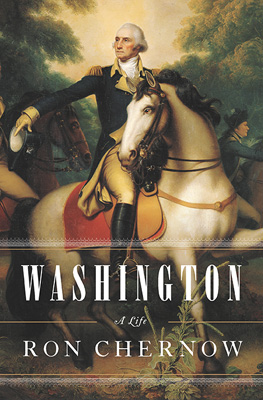 Chernow is equally excited about the new cooperative agreement between the National Archives and the University of Virginia Press to publish online the works of Washington, Hamilton, and other statesmen from the era. The Founders Online project will create a new web site which provides access to the fully annotated published papers of key figures in the nation’s Founding era. The project is designed to include the papers of George Washington, John Adams, Thomas Jefferson, James Madison, Alexander Hamilton, and Benjamin Franklin. "It's simply a fabulous idea," said Chernow. "Unfortunately, the Founders have become remote and abstract, when in fact they are rich, full-blooded, and fiery characters. This new site will not only help students learn more deeply and develop a visceral love and respect for this era, but it will stimulate interest in history for teachers, too, and will reconnect them to primary sources." Such innovative approaches lead to a "democratization of historical research," he says. "Archives used to be restricted to those historians able to come visit and examine the documents first-hand, but now an inquisitive five-year-old with a computer will be able to look at what the Founders thought." 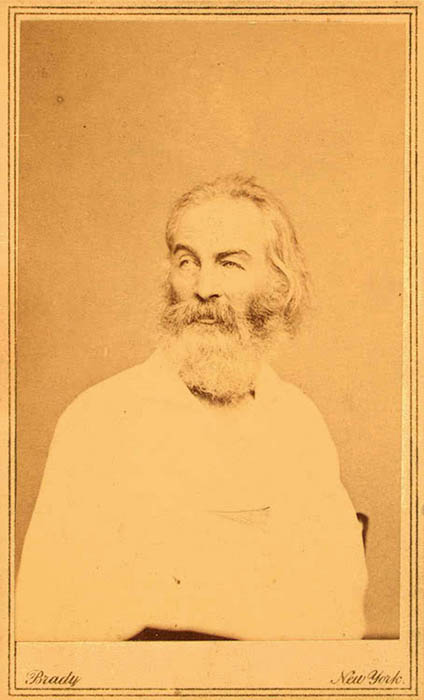 "The United States themselves are essentially the greatest poem," wrote Walt Whitman, one of America's great poets, a figure from the 19th century whose work endures and is read in classrooms and libraries and homes across the country. The NHPRC is currently funding a project at the University of Nebraska-Lincoln to create a comprehensive digital edition of Walt Whitman's correspondence during the Reconstruction era, as part of the Walt Whitman Archive.

After stints as a teacher and journalist in Brooklyn, Whitman left for Washington, DC in late 1862 to tend to his injured brother and found part-time work in the army paymaster's office, leaving time for him to volunteer as a nurse in the army hospitals to tend to Union soldiers wounded in the Civil War. Three years later, he began work as a federal government clerk, a position he would hold until suffering a stroke in 1873. During his years inside the federal government, Whitman had a firsthand view of the legal, cultural and ideological challenges facing the nation during Reconstruction.

Whitman's experiences as a Federal employee have been little explored, until University of Nebraska-Lincoln scholar Kenneth Price began hunting through the archives. For more than two years, Price pored over a range of documents, including large, bound 900-page letter books in the archive, discovering thousands of official federal letters that were written in Whitman's hand.

Price discovered nearly 3,000 Walt Whitman documents written during Whitman's service as a Federal government employee. "Whitman was there in the thick of it. He was not a passive observer; he was participating, on a daily basis, in issues that were shaping what the nation would be like after the war," Dr. Price said. In an interview at the National Archives, he discusses the significance of this discovery in this Inside the Vaults video short. 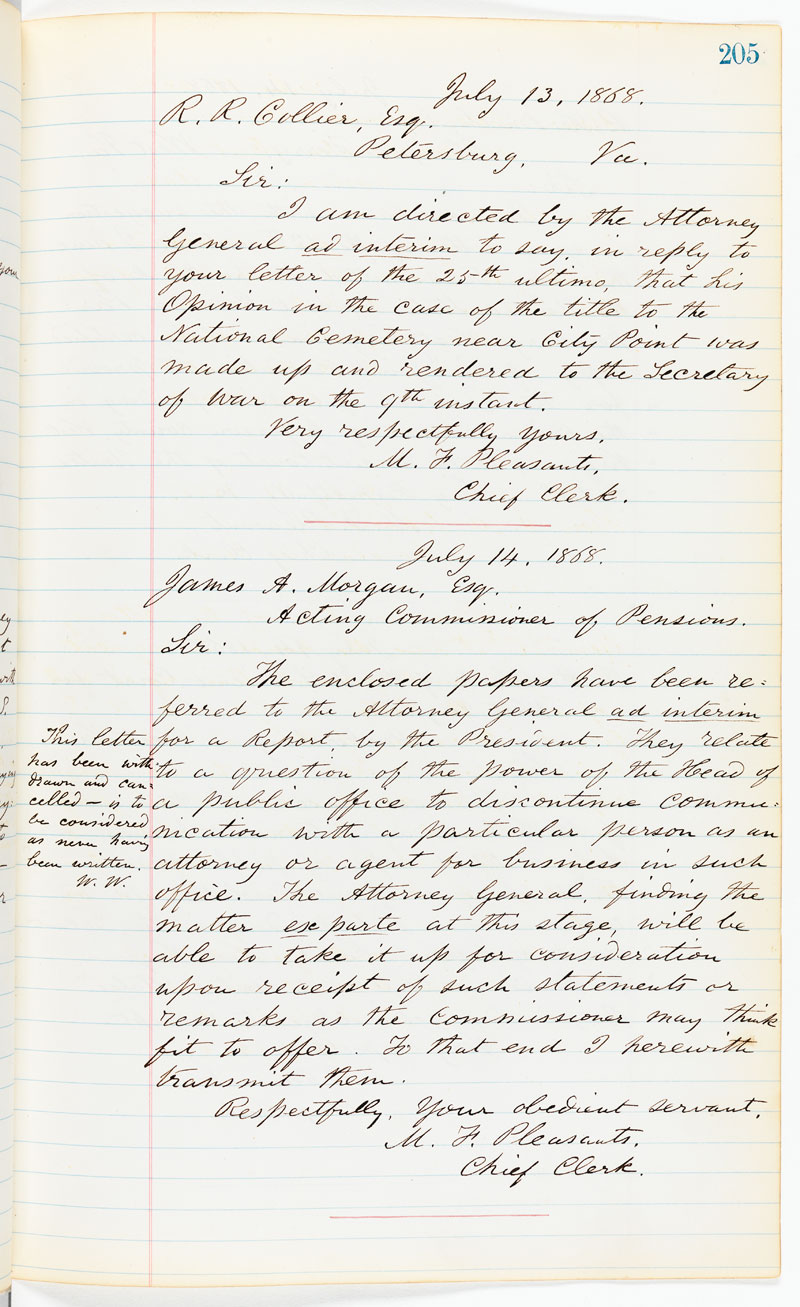 In his clerical work, Whitman hand-copied letters and papers authored by federal officials on issues ranging from Reconstruction to the enforcement of new civil rights amendments to the myriad consequences of westward expansion. Kept in massive letter books, this record of official correspondence is part of the National Archives.

Whitman's work no doubt shaped Democratic Vistas, Whitman's seminal 1871 analysis of American democracy. Casting a cold eye on the nation at that time, while sharing a vision for an ideal democratic society, it remains one of the most penetrating examinations of American society ever written.

The letters will be published in the online Walt Whitman Archive, a long-term effort to edit Whitman's work on the Web. Dr. Price said he anticipates that 2,000 of the documents will be made available to the public by September, with the remainder released next year. 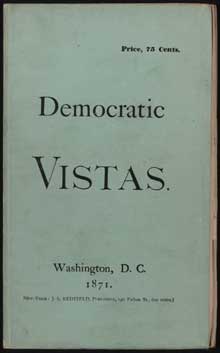 "This guy was on the phone more than any president in history," wrote Charlie Roberts of Newsweek. "He made the phone an instrument of national policy." 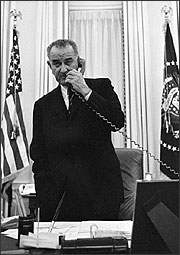 President Johnson used the telephone to discuss strategy and direct tactics with his allies in Congress to get the civil rights bill passed. LBJ Library

The man on the telephone was President Lyndon B. Johnson. After assuming the office in November, 1963, Johnson taped many of his telephone calls each day in order to track his lobbying efforts. Over the course of his term in office, Johnson taped nearly 850 hours of recordings, including over 9,400 telephone conversations and 77 meetings. The Lyndon B. Johnson Library and Museum in Austin, Texas took possession of the recordings in January 1973 a week after Johnson's death.

At the time, such recordings were considered as another part of the massive amount of material in the President's papers. It wasn't until later, in July 1973, that the matter was raised to an entirely new level of scrutiny. During the Watergate trial that summer, Alexander Butterfield revealed that President Richard Nixon had been secretly taping his meetings and telephone conversations since the spring of 1971. Further investigation made it made clear that Nixon was not the first but only the latest U.S. president to tape secretly in the White House.

Beginning with Franklin Roosevelt, each of the presidents had made some secret recordings. From the small set of tapes from FDR and Truman to the more expansive recordings of Eisenhower, Kennedy, Johnson, and Nixon, the cumulative archive is about five thousand hours of recordings, providing another window into the presidency during some of the most pivotal and contentious years of American history. 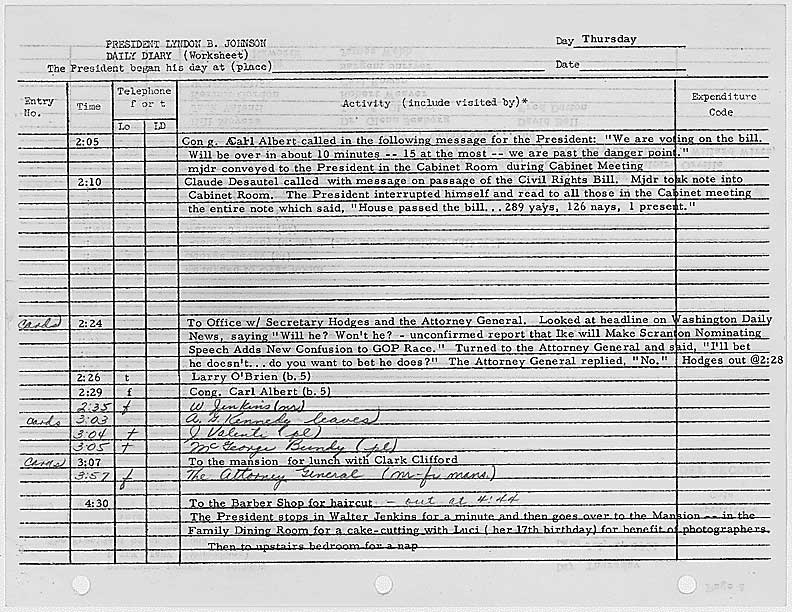 In 1998 the Presidential Recordings Program was founded at the University of Virginia's Miller Center of Public Affairs to transcribe and annotate these thousands of tapes. With support from the NHPRC and others, a total of nine print reference volumes have been published with W.W. Norton and Company. Over the past few years, the project has created a digital editions website as a way to present the original audio recording directly alongside the annotated transcript. This groundbreaking website provides access to hundreds of audio recordings, with plans to add continuously to the site until completion. 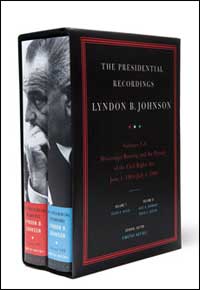 The most recent release in April 2011 is Lyndon B. Johnson, Mississippi Burning and the Passage of the Civil Rights Act: June 1, 1964-July 4, 1964, a two-volume hardcover slipcased with audio DVD. In the 33 hours of tapes from a 34-day stretch in 1964, Johnson can be heard fretting about the escalating violence in Vietnam, strategizing with Democratic allies about pushing through his domestic agenda, and deftly cajoling his political opponents.

The new recordings cover a harrowing sliver of the American experience, with the President continuing to struggle with nation's course in Vietnam, cajoling legislators to pass his vision of a Great Society, and finally signed into law a momentous civil rights bill. At the same time, LBJ dealt with his first national domestic crisis when three civil rights workers went missing in Mississippi, an incident that would test his commitment to civil rights and become one of the defining moments of the 1960s.